There’s no sugar-coating it: data centers use a lot of energy. Probably few people think about it, but uploading selfies on Instagram, shopping on Amazon or reading this blog all contribute to global warming. Our continuous request for new, fast, effective Internet services forces data centers to become larger and more powerful, so much so that the energy it takes to power them accounts for more than 2% of all global greenhouse gas emissions, similar to aviation.

Cooling accounts for an awful lot of that power, roughly 40%. It stands to reason, then, if we can reduce the power it takes to cool a data center, we will go a long way toward making them more energy efficient.

One way to do that is to increase the temperature of the water that we use to cool our data centers. While that may sound like a simple solution, to be effective on a large scale the idea will require a reworking of data center cooling architectures.

But the idea is a viable one, especially considering that in recent years ASHRAE, in its guidance on data center temperatures, has increased its “recommended” and “allowable” temperatures, a topic we’ve covered previously. In a nutshell, that means many data centers don’t need to be as cool as they used to. Most data centers will find temperatures of 24°-25°C (75°-77°F) will suffer no difference in reliability vs. cooler temperatures.

With these temperatures in mind, we can now look at how to gain maximum efficiency from a data center cooling solution. Our main focus in rethinking cooling system design is on two factors: chilled water temperature, and the difference between the temperature of the chilled water when it goes into the data center and when it comes back, known as the delta T. 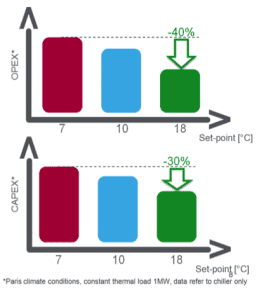 If temperatures inside the data center are higher than in the past, that means the temperature of the chilled water used to cool it – known as the set point for the chillers – can also be higher. As it turns out, that has a profound effect on cooling system efficiency.

Raising the chilled water set point from the usual values of 7° to 10°C used in comfort cooling chilled water plants up to 18° to 20°C or higher can result in an operational expense savings of about 40%. That’s because less energy is required to cool the water year-round. In summer, higher evaporating temperatures mean compressors don’t have to work as hard, resulting in improved efficiency. In cooler months, users benefit from many more hours of economizer or “free cooling” operation. A higher set point also results in a capital expense savings of some 30% because chillers don’t have to be as large as at traditional temperatures.

The reason for that gets into the delta T discussion. A system designed with a larger delta T of around 10°C, as compared to the typical 5°-6°C, requires less water flow and head pressure. That means the pumps that move the water through the system don’t have to work as hard.

Pumps are working 24x7x365, so a savings of even 1kW per pump adds up more than 8700kW saved over the course of a year; that’s a savings that’ll be available for any system, in any sort of weather. 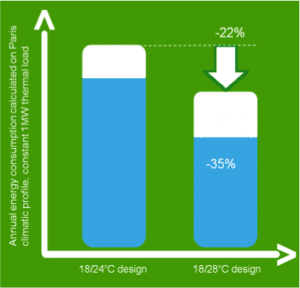 As with the higher set point, a higher delta T also means free-cooling can be used more often, with ambient temperatures about 4°C higher than with the lower delta T. It also means about a 20% reduction in the power consumed by the chiller fans, since airflow needs decrease as compared to systems designed using traditional delta T values.

Savings will vary depending on region, of course, but estimates from the National Renewable Energy Laboratory show savings ranging from about 13% in New Delhi (when compared to 5°C delta T), to 22% in more temperate climates such as Paris where free-cooling can be used more often.

Accommodating this sort of revised architecture may mean some design changes in cooling equipment because existing equipment, including chillers, air-conditioning units and heat exchangers, may not be designed to work at those higher temperatures. But the technology and equipment for these elevated temperatures exists and it’s a change that can yield significant savings day in and day out.