A record breaking lake effect snow episode occurred across the Buffalo, New York Metropolitan Area on Monday, November 17th through Friday, November 21st.  Incredible totals of more than six feet of snow occurred in a localized band.  Although, western New York is accustomed to heavy localized snow events, this event was severe enough to bury these communities beyond capacity.  How could such intense snow fall over a localized area for so long?  The ingredients necessary are examined in this blog.

The formation of lake effect snow is straight forward.  The basic concepts are demonstrated below with this image, courtesy of GOES-R/NASA. 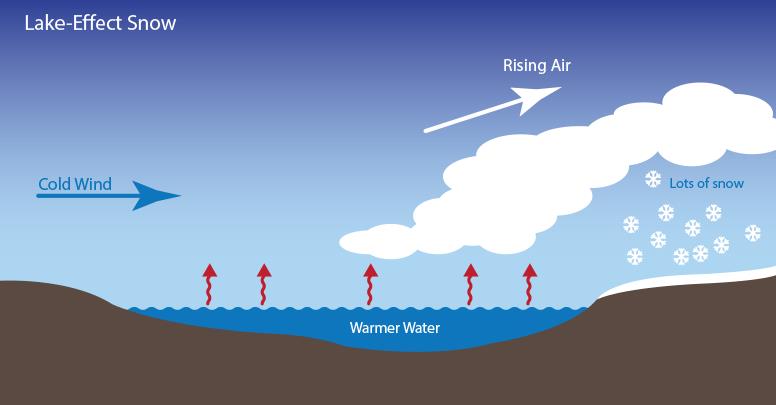 The process begins with cold air flowing over relatively warm water.  This creates instability, which is where temperatures decrease with height and unstable air rises. When the difference between temperature of the lake surface and the temperature of the air at around 4000 to 5000 feet is 13 degrees Celsius or greater, the instability is great enough to create lake effect snow.  In the case of the Buffalo lake effect snow event, the difference was a staggering 24 degrees Celsius.

Airflow over the Lake

It is important for the air to flow over the lake for a large distance (referred to as the “fetch).  Lake Erie is oriented from southwest to northeast therefore, southwest winds are necessary to produce the maximum fetch.  This is important because it allows air to flow over the warm lake water for as long as possible, resulting in maximum moisture availability for lake effect snow.  This ideal direction was maintained for a very long time during the Buffalo event.  The lack of change in wind direction allowed the band to remain oriented over one general area for many hours.

The image below is a forecast from the North American Mesoscale model (NAM) during the heart of the snow event.  The NAM is a weather forecast model produced by the National Centers for Environmental Prediction to ingests the current state of the atmosphere and uses sophisticated calculations to forecast a myriad of environmental variables out into the future.  The image below was the 6 hour forecast from a model run- Notice the wind lines on the extreme right side.  These lines show the direction the winds come from.  In this example, the winds were flowing out of the southwest and with the wind oriented in the same direction from top to bottom.  This clearly demonstrates that the wind shear was near zero through the duration of this event, resulting in a strong lake effect snow band. 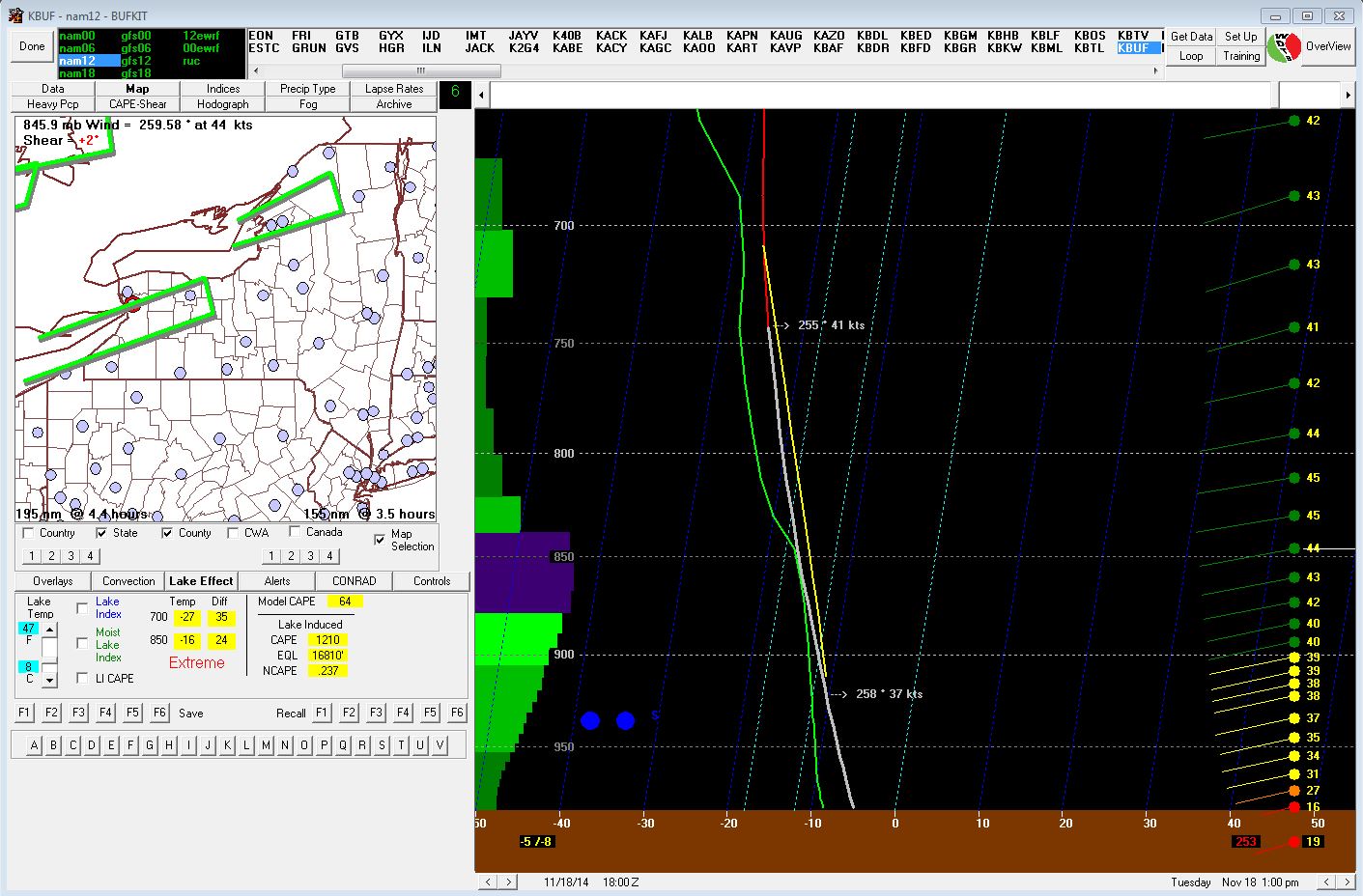 Lake effect snow also depends on the existing environment around the lake.  If there is existing moisture around that did not come from the lake and a lifting mechanism nearby, this can enhance the lake effect snow.  The images below demonstrate that moisture and a weather system were present during this event.   In the image “500MB” image below, you see little disturbances in the trough over Lake Erie.  These little disturbances produce added lift to assist the lake effect snow.  The image marked “850MB Temps” shows relative humidity and temperatures and there is green shading near Lake Erie, which shows high relative humidity.  This demonstrates that there was moisture available and lifting mechanism.

When all these conditions come together perfectly and persist for a long period of time, the snow accumulations can be staggering.  Snowfall rates in western New York were over 3 to 5 inches per hour through this event. This particular event came in two distinct bursts.  The first one was Monday and Tuesday.  The second one occurred later Wednesday night and Thursday.  Below are select Doppler radar images in animation over a course of 7am- 3pm EST.  The radar looked remarkably similar during that time, since the snow band was stationary. In addition, the darker colored areas just south of downtown Buffalo show the heaviest snowfall rate.  This sampling of the event showed heavy snow falling over a similar area for 8 hours.

Finally, this graph shows select top snow totals from the storm, as reported by the National Weather Service Forecast office in Buffalo, New York.  There is quite a wide range of totals, which demonstrates the challenge of lake effect snow forecasting. 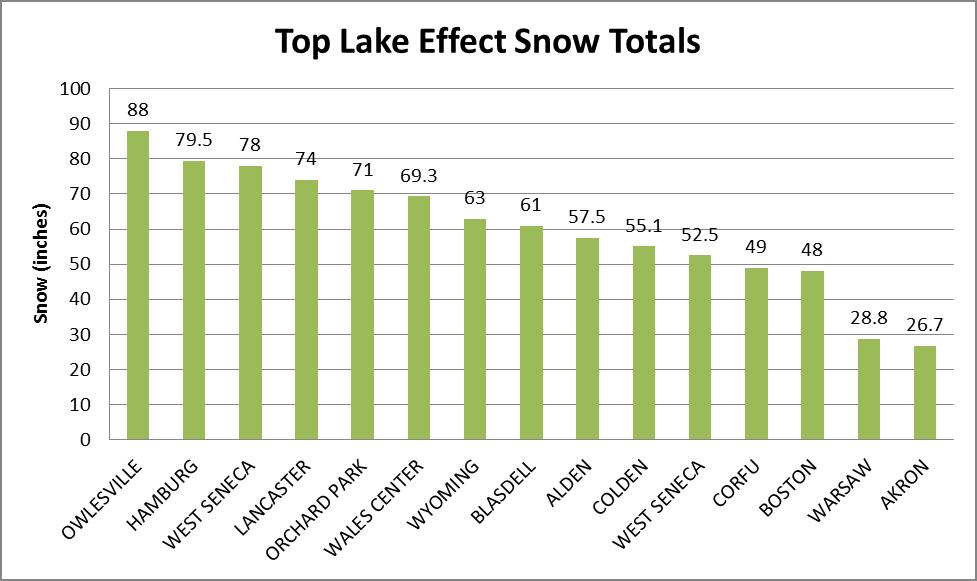