In our last post, we examined the difference between weather and climate, and looked at some of the natural and man-made causes of climate change. Top Schneider Electric meteorologists have identified recent climate changes as a cause of increased weather volatility.

Observations have shown that in some regions of the world:

While it’s difficult to take a single event (like Hurricane Sandy) and tie it directly to climate change, Schneider Electric meteorologists have looked at a range of extreme events over an extended period of time to determine whether or not these events have a higher frequency. 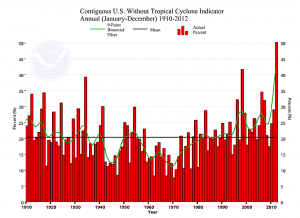 This table shows the Climate Extremes index for the United States from 1910 until today. It looks at the percentage of recorded extreme events – including excessive heat or cold, severe drought and heavy rainfall. The chart shows a clear uptick since the 1970s in these types of outlier events.

One of the most important features of Earth’s climate system is the difference in temperatures between tropical and arctic regions. Cold arctic temperatures create lower air pressure in the region which then causes west to east winds in the northern and southern hemisphere. However, as the planet’s temperature increases, the polar ice caps recede and arctic regions warm substantially more than tropical regions. This pattern reduces the temperature difference, slowing the west to east winds and causing more frequent stalling of weather features.

How does this impact climate? Emerging research shows that extreme events tend to occur when weather patterns slow down or stall over an area. For example, the U.S. droughts of 2011 and 2012 occurred when high pressure systems stalled over the area for several months. Europe has seen severe cold over the past few winters as blocked or stalled circulation patterns kept cold air locked in place – which also happened in the United States in March of 2013.

The links to enhanced arctic warming could help explain some causes of recent extreme weather patterns like cold, heat wave and drought. Increased frequency and duration of blocking weather patterns could be a response of the climate system – it is difficult to assess, but it is clear that these more volatile weather patterns are affecting regions across the planet more frequently than natural variability would suggest.

Coming up in the final post of this series on Friday, we’ll look at the impacts of increased climate volatility.

For a free download of our new white paper, “Changing Climate:  What Does It Mean?”, click here.

Changing Climate: What Does It Mean? Part One: Climate vs. Weather

Climate Change and Its Effects Part One: Frequent Volatile Weather

Climate Change and Its Effects Part Three: Why Integrating Weather Forecasting is so Important?