The Eastern seaboard has taken a beating from hurricanes over the last two years. Will 2013 bring more of the same? In a recent webinar, Schneider Electric’s Chief Science Officer, Jeff Johnson, predicted it will be another active hurricane season, estimating a 30 percent increase in named storms this year compared to normal years.

During the spring of 2013, there has been a large pool of relatively warm water across much of the Atlantic from northern Africa westward toward the Caribbean. If the water remains warm, as seasonal forecast models suggest, it will provide a favorable breeding ground for tropical cyclone development.  The above normal warmth is expected to persist throughout the tropical season.  The season could again get off to an earlier start due to the presence of this warm pool of water.

Another clue to how the tropical season will play out relates to the expected phase of ENSO (El Niño Southern Oscillation). El Niño tends to reduce tropical cyclone total numbers due to increased upper level wind shear over the tropical development areas of the Atlantic basin. Meanwhile, La Niña normally has less wind shear throughout the season, which is more favorable for development and persistence of storms.

So far in 2013, ENSO has been in a neutral phase. Most forecasts continue to suggest that it will remain neutral through the summer into the fall, with no clear trend on whether an El Niño or La Niña might form next. Wind shear in neutral years tends to be closer to normal, but may vary from month to month. Average storm numbers tend to be a little higher in neutral years. Seasonal model projections for this summer and fall suggest that lower wind shear compared to normal will occur over tropical development regions.

The forecast for 2013 is calling for an above normal season once again. The favorable forecasts of both warm water temperatures and lower than average wind shear should help to promote a greater number of storms. Looking at past analog years when ENSO was neutral showed an average of 10.2 named storms, 6.8 hurricanes and 4.5 major hurricanes, all of which were above long-term averages.

A composite of these analog years is shown in the map below, which included 1952, 1959, 1960, 1961 and 2001, shows that the majority of the storms favored tracks through the western Atlantic including some that were near or into the East Coast. 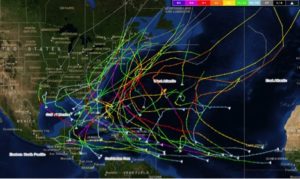 With another very active season likely for the entire Atlantic basin, it is important to remain vigilant of any storms that form this season. Warm water could again lead to an early start to the season especially for the northern Caribbean and off the coast of the southeast United States. Lower wind shear values throughout the season will also be more favorable for storm formation and continuity. Warm water in the eastern Atlantic west of Africa could also help strengthen the longer tracked storms that form there in the middle part of the season. These storms have more potential to become major hurricanes as they travel over the warm open seas for a longer period of time.

Conditions are Favorable for a Mild Hurricane Season in 2014 – Maybe