This is Part 1 of a two-part blog on the application of business process management (BPM) for transportation operations for the Smart City. This Part 1 will focus on why BPM is needed in the Smart City and Part 2 will present some examples for typical mobility operations and some of the potential benefits and improved efficiencies.

Every urban driver understands the joy of catching a “green band” and making the green at every traffic signal on a busy arterial. They also understand the pain of having to stop at every traffic signal – even when there is little traffic congestion. Calculating the timing of traffic signals to provide that green band (technically called “progression”) can be a difficult balancing act – providing a few more seconds of green time to the side street while giving the main street enough time to keep vehicles moving. However, roads often stretch between two or more jurisdictions. What may not be apparent to drivers is that there are often different control systems for each jurisdiction and these systems do not easily “talk” to each other. So when a driver crosses over that unseen jurisdiction boundary, they may also cross into different traffic control scheme, thereby loosing that green band and having to stop. 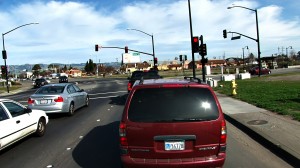 Why not put all traffic signals on the same system? Seems logical, but in reality, every jurisdiction wants to maintain its own control systems for transportation within its boundary. The Mayor of the city will not cede control of his or her traffic signals to another jurisdiction which may have different priorities than those of his or her constituents. This is one small example of the many institutional “silos” that is typical in urban areas.
Now take this small example and expand it to include all transportation operations (and competing interests) in a major urban area, such as incident response, special events, transit, parking, etc. The history of urban mobility has forever been one of multiple agencies, each with differing missions and areas of responsibility. In the US, for example, a large urban area will have multiple agencies providing transportation infrastructure and system operations. In the Washington DC metro area, for example, there are two state DOTs (MD & VA), five transit agencies, three commuter rail operators, several cities and urban counties, (e.g., the cities of DC, Bethesda, and Alexandria; counties of Arlington, Fairfax, Montgomery and Prince Georges, just inside the beltway) all with some level of autonomy in the operation and management of their transportation systems. The promise of ITS has always included the goal of integrated operations, but reality of past implementations, has shown that the institutional issues – getting agencies to cooperate and work together, rather than in their own “silos” – are often much bigger issues than technology.

It is clear to most that every city contains these multitudes of systems. In our example above, the systems are separated into the silos of multiple agencies. Even those systems within a single agency are often separated by the silos of different mission statements (e.g., traffic operations and law enforcement). The Smart City is as system of systems. Any system that works well is an inseparable combination of people, processes, and technology that work together seamlessly. At Schneider Electric, we recommend a high level approach to the successful transition to a smart city which includes the following five basic steps:

Applying this approach to each critical domain of a city can help eliminate the obstacles to a more intelligent infrastructure and open the path to achieving smart city operability. An important tool used to implement – and eventually maintain – the smart city transformation is Business Process Management.

Business process management (BPM) has been referred to as a “holistic management” approach to aligning an organization’s business processes with the wants and needs of its clients – in this case, the citizens of the smart city. BPM both promotes and enables effectiveness and efficiency. Business processes can – and, in fact, are encouraged – to change to accommodate continuous innovation, flexibility, and improvement as technology and community goals evolve. Through this evolutionary path, BPM becomes more of “process optimization process.”

BPM supports many types of organizational structures, including commercial business and government agencies. Its real benefit is that it enables organizations to be more efficient, more effective, and more capable of change than a functionally focused, traditional hierarchical management approach.

In Part 2 of this series, we will explore more about what makes up an effective BPM tool and present some examples of how it can improve transportation operations.

Maybe your city needs information management instead of another highway?