In four decades, technology evolved from brick-sized mobile phones to autonomous driving vehicles. This progress was made possible by the evolution of wireless communication technologies. 5G is the latest generation of wireless networks. It presents capabilities that can transform communication by delivering bandwidth of 10 Gigabits per second (Gbps), transmitting more data at higher speeds.

We discussed the evolution of 5G and the need for innovative power system design in an ASCO Power Technologies Innovation Talk Webinar with Bablu Kazi, a Senior Electrical Engineer at Morrison Hershfield. Our discussion included the following topics:

The Evolution of 5G

1G technology was the gateway to wireless communication in the late 1970s. It could deliver voice but provided limited coverage, weak security, and low sound quality. This analog cellular communication system provided up to 14.4 kilobits per second (Kbps). Put into perspective, that speed today would enable someone to download a 1 gigabit (GB) file in six days.

The next generation allowed the transmission of voice and data within a bandwidth similar to its predecessor. 2G arrived in the 1990s with more features such as text messaging and encryption for cybersecurity. Using digital circuit-switched solutions helped bring about these features.

When 3G came along in the early 2000s, its 3.1 Mbps bandwidth and standardized networking protocol made wireless communications more convenient and useful. 3G made email and internet available to portable phones and electronic devices.

In the late 2000s, 4G introduced a higher caliber of video, a Voice over Internet Protocol, and worldwide roaming. It offered users a greater bandwidth of 100 to 300 Mbps. Nevertheless, the telecommunications industry looked for more ways to innovate and reduce latency than ever before.

The fifth generation of wireless technology, or 5G, with speeds at 10 Gbps, opens an entire realm of possibilities. 5G is a software-based network that uses cloud computing, resulting in performance that’s 20 times faster than 4G. It uses inherently different technology, including millimeter wave, smarter cell, massive multiple in multiple out (MIMO), beamforming, and full duplex technologies. Each contributes to faster reaction time, greater throughput, and reduced latency in network communications.

Reduced latency is a key difference between 5G and 4G. Latency is a measure of the time it takes for data to travel from one point to another. With 4G, latency is around 60 milliseconds. 5G slashes that to only 5 milliseconds. This opens the door for different opportunities in healthcare, eCommerce, autonomous driving, and more. One example is 5G for the Internet of Medical Things or IoMT, which enhances patient diagnosis, treatment, and monitoring. Another application for 5G is improving the safety of transport infrastructure with vehicle-to-vehicle communications through real-time data computing. 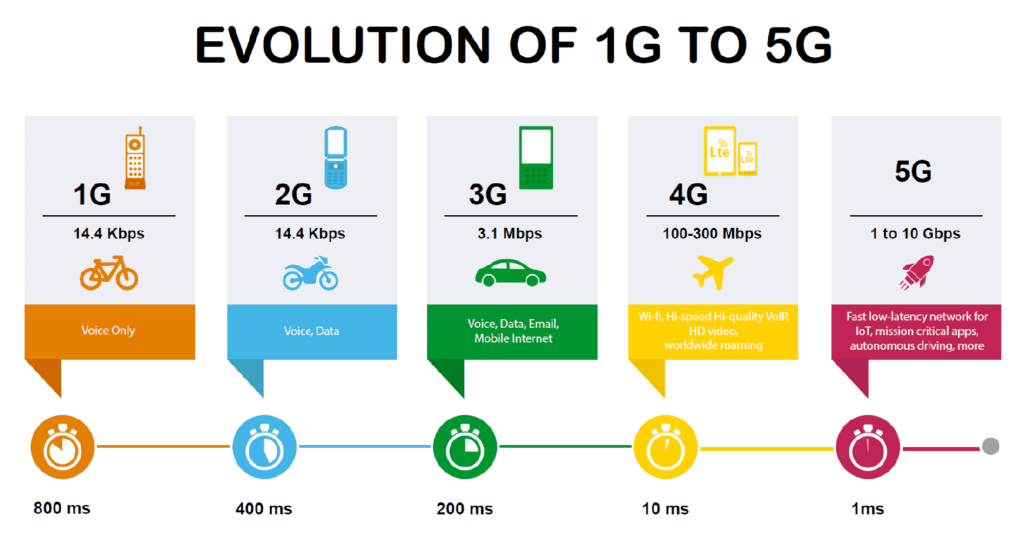 Increased user dependence on 5G for more sophisticated and mission-critical operations will require a continuous power supply that the present utility grid cannot offer. The growing record of outages and power issues is proof. Factors such as supply shortages and extreme weather can affect any utility grid. That’s why there are different actions that telecommunication facilities can take to mitigate outages and their effects.

Driving power reliability for 5G infrastructure comes in different forms. Facilities can deploy redundant edge computing facilities and power conditioning. The level of reliability may also depend on the potential impact of an application failure for a particular facility.

For Kazi, a backup power system for 5G requires three things: Uninterruptible Power Supplies, generators, and transfer switches. An uninterruptible power supply helps avoid momentary disruption when a secondary power source starts up, gensets and generator transfer switches provide a reliable power source following startup, and transfer switches provide a means of switching from one source to another. Kazi also adds that there will be an increased implementation of sustainable technologies such as smart grids to reduce carbon emissions.

When asked if there will be a “6G”, Kazi reassures that the wireless technology development isn’t going to stop where it is today. “If you look at our history, you’ll know that we’re never satisfied with anything.” Wireless communication is going to continuously evolve to keep up with demand and power the digital economy.

But there is a long way to go. 6G is expected to roll out with greater speeds and a focus on sustainability in 2030. Telecommunication companies are still aligning and developing products for a 6G rollout. Analysts say that it can enable “smart city” applications as well as the deployment of holographic communication technology. Kazi provided a hopeful conclusion to our conversation, “I’d be surprised if we don’t see a 20G in our lifetime.”

To see and hear the full discussion, click on our recorded interview session. Stay tuned to the ASCO webinar page to learn of upcoming innovation talks on critical power topics.