The development of any nation now strongly depends upon how the information resources of the world can be made available to a larger population through access to the Internet. Developing countries like Sri Lanka, India… have much to gain from this revolution in communication and information access. However the main challenge resides in the deployment of low-cost/affordable Internet infrastructure and ensuring last mile distribution.

In the same spirit, the Government of Sri Lanka and Google recently signed an MoU to launch the Google Loon project there. Kudos to the government, for realizing the importance of digitization and ensuring that they have right policies in place so that hopefully in a a short time every person and device on the island will be covered by 3G. With this proposed blanket internet coverage, Sri Lanka is poised to become the first country in the world to provide a universal Internet service for its citizens. This should give more space for them to improve technology, content and service. It can help them emerge into a knowledge-based competitive social market economy. 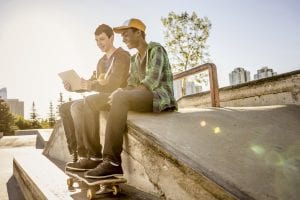 Project Loon is certainly one of Google’s whacky ideas, which will have balloons flying over the country to create a ring of “uninterrupted connectivity” throughout the country. Seemingly, Google has tested in the past its Loon balloons with some success in Argentina, Brazil, Chile, New Mexico and New Zealand, but have never covered an entire nation.

As I probed further, there could be a dozen of balloons covering the entire country and that each balloon can service about 5,000 sq km to cover the total area of the country which is around 65,610 sq km. The balloons are intended to be equipped with solar panels and will have electronics and communications gear box underneath that provides LTE internet connectivity to an area on the ground around 40 km in diameter. The entire population of 20 million should thus be able to access high-speed Internet via their smartphones from anywhere in the country. It could well lead to profound changes in a nation that presently only has 2.8 million mobile Internet connections (0.14%  of the population) and less than a million with fixed-line connections.

The government seems to have taken a strategic step towards digitization and becoming connected in an increasingly connected world. To be part of the digital era, this can be one of the best ways to grow as a nation with the ability to contribute knowledge to their community and connecting people through technology.

Floating Mylar balloons – the latest technology in hotel comfort. Really?!?! Some believe so…

How Connectivity Will Control Everything We Know: Part 2

How Connectivity Will Control Everything We Know: Part 4