Until a few years ago, topics like global warming, sustainability and climate change were terms that were only brought up in academic debates and discussions. However, in the last decade, people on a global level have begun to witness a massive amount of change in their lifestyle and surroundings, which is directly connected with environmental degradation. Now, since climate change is a vast and abstract topic, it can be difficult to comprehend how it can have an effect on the daily lives of people.

It is important to understand that even though climate change has an impact on a global scale, it results from the disruption caused in the cycle of natural day-to-day processes like the water cycle, soil formation, oxygen production, and more. Let us take an example: climate change has a direct impact on the cost of almost all of the necessary goods that we use in our daily lives like fruits, vegetables, pulses, meat etc., as it hampers the process of crop production.

Economics and Integration Behind a Solar Power Plant

In layman terms, solar photovoltaic technology is employed to harness the required amount of solar power that effectively converts solar radiation or sunlight into electricity by using a range of semiconductors. So, when the sunlight strikes the semiconductor placed within the PV cell, bus bars start the process of collecting the dispersed electrons, which eventually leads to the generation of electric current. 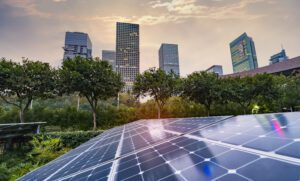 Inventions that Impact the Economics of Solar Power Plant

However, since this is an alternative way of producing electricity, it requires the deployment of intelligent technology and technical parts that come together to ensure that all renewable energy is powered across different sectors and industries. Hence, in order to purchase a quality solar power plant, businesses and industries have to make a huge amount of investment which often comes across as a tough task for organizations.

The cost factor, therefore, leads people to deviate from purchasing solar power plants. Several scientists and experts have suggested that one of the best ways of propagating the benefits of renewable energy is by coming up with new ways to lower the overall cost of employing solar power. Now, let us take a walk through some of the many evolving technologies that must be deployed on a larger scale while having an impact on the economics of a solar power plant:

Concentrated solar thermal power is considered to be the third major solar power technology today, and even though it is the most affordable option that is available in today’s day and age, it has two major drawbacks or limitations. While photovoltaic systems can be installed in a close range with customers, it significantly lowers the cost of distributing and transmitting electricity. However, on the other hand, concentrated solar thermal power demands open spaces and close to perfect solar conditions, which can only be possible if there is an adequate amount of distance from customers.

Next, since concentrated thermal power uses conventional tools and devices like reflectors and pipes, there is a chance that the total cost of deployment might not get lowered by a considerable margin. But barring both these points, it is clear that multiple national and international utilities consider concentrated solar thermal power to be their solar technology of choice.

Experts in every leading country are trying to invent novel solutions that lower the cost of solar plant employment while boosting the economics of solar power plants. It is important to remember that even though silicon wafer-based photovoltaics is used in 90% of installed solar capacity, it still meets one primary challenge that must be resolved in order to receive better and more efficient results.

To elaborate, the installation process of this technology requires massive investment as huge amounts of photovoltaic technology is needed to design the solar panel. Thus, this hampers as well as accelerates the economics of solar power plant on an equal level.

The introduction of thin-film technology has proven that it carries the capacity to meet high-efficiency levels at commercial production volumes. How does this happen? Thin films require minimal use of raw materials, which successfully extending the cost gap in the future. However, thin-film technology is only suited to flat rooftops and large field installations while offering uncertain longevity in comparison with silicon-wafer-based photovoltaics.

The Road Ahead in the Economics of Solar Power Plant

Boost the Economics of Solar Power Plant with Schneider Electric

At Schneider Electric, we continually bring in innovative changes in our approaches and technologies to bridge the gap between progress and sustainability. We provide highly efficient photovoltaic power plant solutions for decentralized and centralized installations that are inclusive of power conversion, monitoring, technical support, PV integration, and distribution. All our products and solutions are exclusively designed to make way for a sustainable future while boosting the economics of solar power plant by being affordable and easy to operate.