Since the mid-twentieth century, sulfur hexafluoride (SF6) has been widely used as a replacement for oil as an insulator in electrical equipment, with one of its largest uses today being in electrical switchgear. SF6 has proven to be reliable and highly effective in applications where arcing can be expected and its use has enabled smaller, cleaner designs and greater equipment durability over time.

By almost all accounts, SF6 has been a strong performer in electrical equipment.

However, SF6 is also a “greenhouse gas” (GHG). As one of the group of compounds known as fluorinated gases, SF6 turns out to be the most potent GHG in terms of its global warming potential (GWP).

With this realization have come strict measures to help limit the release of SF6 into the atmosphere. These include careful accounting of the production and distribution of SF6 as well as limits on its use.

In the United States, the EPA began investigating SF6 in 1997. In 2012 it mandated reporting for equipment with nameplate capacities of 17,820 lb or more. This has resulted in a marked decrease in emissions. Many states – most notably California, but also including Washington, Oregon, Massachusetts, and New Jersey – have followed suit by instituting SF6 reporting regulations and lowering permissible emissions.

As early as mid-2000, the European Climate Change Programme (ECCP) identified SF6 reduction as a key component in its GH reduction initiatives to meet the Kyoto Protocol commitments made by the EU. Plans included the eventual banning of some F-gases in specific applications as well as strengthening the operational controls of systems that use these gases and limiting their production and import/export activities. These efforts have continued under the Paris Climate Agreement of 2015. With the next UN Climate Change Conference scheduled for November 2020, many participating countries are now drafting updates to their climate plans, or Nationally Determined Contributions (NDCs). Environmentalists anticipate that 2020 may mark a turning point in GHG reductions, ushering in even more rapidly tightening regulations. 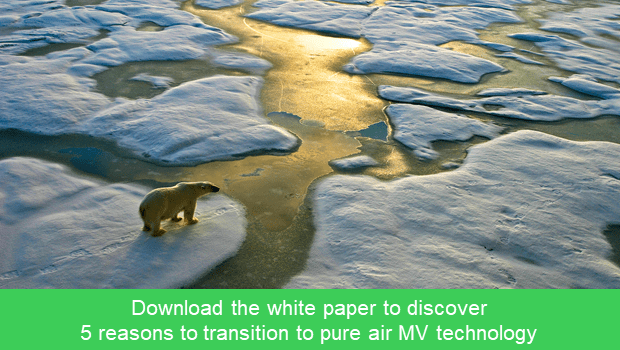 Great advances have been made in GH reduction in applications such as aerosol propellants and air conditioning. For example, the automotive industry and HVAC manufacturers in general have over a number of years phased out the use of HFC-based refrigerants. Some uses of SF6, such as in magnesium production, have also been drastically curtailed. However, its use continues in several applications.

85% of the SF6 produced today is used in high-voltage and medium-voltage electrical switchgear along with other gas-insulated electrical equipment. The record keeping for sealed systems, like those used in MV, reflect very low loss rates of 0,1% over the entire life cycle. Other uses of SF6 where the gas is not in a sealed system include medical, metallurgical, and electronics applications (like printed circuit boards). Although these applications account for a smaller portion of SF6 usage, they contribute a similar proportion as the SF6 that is released into the atmosphere by the electrical industry.

What are the rules today and where are they going?

The EU has set the goal of reducing its F-gas emissions by two-thirds by 2030. Although much of this will come from using less of the gases covered by the Montreal Protocol, SF6 is an integral part of the mix.

Specific measures being implemented include limiting the total amount of hydrofluorocarbons that can be sold in the EU; banning the use of some F-gases in many new types of equipment; and preventing SF6 emissions through monitoring, servicing, and end-of-life (EoL) gas recovery in electrical switchgear.

SF6 recovery is especially important. The most climate-damaging driver of SF6 impacts involves the potential equipment EoL emissions. This process for a unit of MV switchgear encompasses the final journey of SF6 from its extraction from the switchgear to transport to recycling or destruction. European regulations for SF6 handling and recovering exist, but implementation of these rules is uncertain.

The Fraunhofer Institute for Energy Economics estimates that different users exhibit a range of quality in their behavior at SF6 EoL – from good SF6 handling to negligence – depending on whether the switchgear owner is a large electric utility or a member of the more fractured private market. Fraunhofer estimates the following SF6 leakages during that lifecycle stage:

Only stronger regulation of the decommissioning of SF6 equipment, and/or enforcement of the existing policy can solve this problem.

In California, these types of regulations are promulgated through the state’s Air Resources Board (ARB). A phase-out schedule is currently in place, including increasingly stringent limits on allowable SF6 emissions rates, which in 2020 bottomed out at just 1%. Current plans include a staged phasing out of SF6 use, beginning with equipment rated at 72 kV or less at the end of 2024. Its use in higher voltage equipment will occur at the end of 2026 and 2028, with the equipment with the highest rated voltage (550 kV) no longer being allowed to use SF6 as of December 31, 2030.

Most regulations that ultimately will affect the use of SF6 address the chemically similar family of fluorinated gases commonly referred to as ‘F-gases.’ This includes hydrofluorocarbons (HFCs), which are relatively short-lived, and perfluorocarbons (PFCs), which can remain in the atmosphere for many years. Both HFCs and PFCs have been largely replaced by more environmentally friendly alternatives. Thus, as F-gas regulations grow more stringent, they will increasingly affect SF6.

Regulatory activities concerning SF6 use have continued to grow in recent years, centered primarily in California and the European Union (EU). These regulations have mostly granted exemptions for the continued use of SF6 in high- and medium-voltage switchgear for the reason that alternative technologies did not exist. But manufacturers who are thinking long-term have been working to develop more sustainable alternatives to SF6-based technology and several now offer creative new approaches to switchgear design, operation, and maintenance. As these new technologies have been proven in field trials, both the EU and California are showing an increased willingness to move toward further reducing the production and use of SF6. For example, regarding SF6 in medium voltage switchgear applications, the European Commission is currently assessing the feasibility of SF6 alternative technologies that enable the replacement of this GHG.

The new technologies differ from one manufacturer to another, with some choosing to focus on reducing GWP with the help of alternative gases. Certain equipment manufacturers, including Schneider Electric, have elected to avoid the uncertainties surrounding new and unproven alternative gases and instead use pure air for this green transition. In addition to being safe for people and the planet, this air-based approach reduces future regulatory risk. The new green and digital switchgear range, SM AirSeT, has already won the Industrial Efficiency Award at the 2020 Hannover Messe and received the prestigious iF Design Award earlier this year.

To learn about what Schneider Electric is doing to help the electrical distribution industry and energy consumers transition to more sustainable power, visit our SF6-free medium-voltage switchgear technology page.