Should the energy of the 21st century rely on the 18th century tech when we know that 80% of the CO2 emissions are linked to dated production and inefficient consumption of energy? To limit climate change to 1.5C, there is no other option than a drastic change in our consumption and production mode: in our buildings and cities, in our industries, and across infrastructure.

The only sustainable future is all electric and all digital. Electricity is the most efficient energy and the best vector for decarbonization, and Digital brings tremendous new efficiency opportunities. In this context, we must electrify our world, continue decarbonizing electricity production and at the same time, leverage the latest digital technologies to drastically increase energy efficiency.

An urgent call for change

Today, we are in the midst of an emergency. Despite increasing awareness of global warming and its devastating impacts, we still do not have a realistic response. In 2018, the Intergovernmental Panel on Climate Change re-asserted that unless global warming is contained to 1.5C, natural and human systems will be irreparably damaged. Even a slight increase to 2C will raise sea levels so that 10 million more people lose their homes and 50% more people experience water insecurity.

The warning signs are already here. From heatwaves in South Asia to catastrophic hurricanes in the Atlantic Ocean, extreme weather has become the new normal. Unless we find a new way of creating and consuming energy, this trend will only worsen. Both public and private stakeholders have pledged to become net-zero carbon emitters. But these fragmented efforts are insufficient; the latest report from the International Energy Agency suggests that Earth’s future temperature increase will rise upwards of 2.7C this century.

There is a better future. We need to build an entirely new electric world that is all electric, all digital!

First, we must electrify our world, as the most efficient form of energy, electricity should be deployed as widely as possible.

In the automotive industry, for example, electric vehicles (EV) are on track to dominate the market across every segment. By 2040, electric cars should exceed half of all passenger car sales worldwide, and if combined with clean power would represent vast savings in carbon emissions when compared to traditional vehicles. Further reductions in battery prices and public policy incentives, like government rebates, are likely to push this forecast higher. 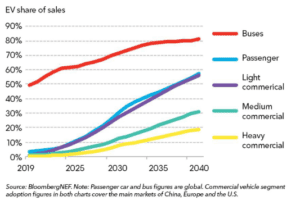 But we shouldn’t be complacent. Electricity can do more than fuel our transport systems. Heating also represents a vast share of fossil fuels demand. It accounts for nearly 40% of total energy consumed. Electrification is pivotal to decarbonize it, while often proven to be already competitive, notwithstanding ongoing innovation.

Second, we must produce renewable electricity at scale and create corresponding public policy incentives. Not only do renewables extract energy from unlimited sources (i.e. sun, wind or water), they also represent a revolutionary opportunity to produce electricity without any combustion. Decentralized by nature, they also offer solutions for localized resiliency and cost-effectiveness issues. They have already reached a tipping point where they are also the most economical source of electricity in most regions of the world.

It’s no wonder that over 60% of the world’s power is expected to be generated by renewable sources by 2050, namely solar and wind, according to BNEF. Already in 2018, global investments in renewable energy exceeded USD270 billion—nearly three times the estimated spend on power generated by coal and gas, and it should continue to accelerate. 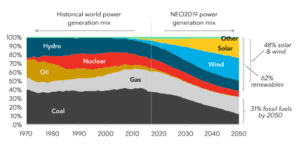 Both the government and industry have a role to play in encouraging this renewable revolution.

Finally, we must leverage digital technologies to optimize our world, and particularly how it consumes energy. Digital can be a powerful driver of change towards a new efficiency equation. These technologies enable already automation and process efficiency improvements in the industrial sector leading to reduced emissions. Beyond, their inherent collaborative capabilities enable new service and circular models to emerge, which promise even greater benefits in terms of efficiency.

Consider the impact of these technologies on the built environment. Massive opportunities also lie in the construction industry where 20-30% of projects are over specified while 15-20% of materials are wasted during the construction process. At the same time, 40% of projects are over budget and 90% are late[1]. A key reason is the prevalence of silos. Digital technologies can help connect the dots and allow more efficient collaboration and sustainable performance overall.

Containing global warming is no longer a choice. It’s an urgent obligation that we can only meet together. Building an entirely new electric world will not only realize the full potential of decarbonization, but also of human ingenuity. More than the challenge of a lifetime, it’s our lifeline.

How Business Can Play a Critical Role in Slowing Global Warming

Resilience in the Face of Global Warming