Home Life @ Schneider From Science Fair to scientist. How one 6th grader’s research could change the world

Maya Sushkin, a 6th grade student from Worcester, Massachusetts was recently selected as the grand prize winner at the Region II Central Massachusetts Science and Engineering fair (Worcester Regional Science & Engineering fair).  She competed with 6th, 7th, and 8th graders from the Massachusetts public and private schools systems. She is the daughter of Yin-Ying Lu, a SCADA lead engineer at  Schneider Electric Foxboro, MA. 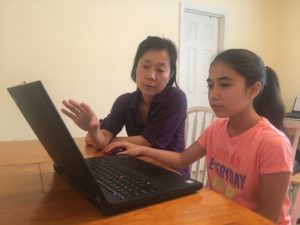 Maya comes from a very green family who are hopeful for a more sustainable Earth. She wanted to do a project that was important and addressed a real-world issue that she could better understand and help solve. While reading a news article about a large chunk of ice the size as Manhattan falling off a glacier in Antarctica, she decided to base her project on the effects of glacial ice melting due to global warming.

Yin-Ying Lu has worked for Schneider Electric for the last 20 years as an engineer partnered with customers on improving their SCADA systems by optimizing generation and delivery of power.  She recently became the controls lead engineer for the Cocassett project for her own office building in Foxboro. That project uses efficient and renewable resources through solar power, Combined Heat & Power (CHP), along with a  Microgrid / Energy Control Center system to operate the plant more efficiently.

When Maya’s project was selected by her school to be sent to the regional fair, Yin-Ying was excited about the opportunity to work with her daughter on a project she felt so passionately about. Yin-Ying knew that global warming is primarily caused by the need for energy, and  she worked with Maya to help develop her ideas into a full-blown research project. 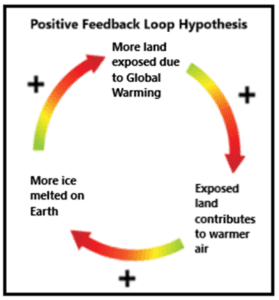 The primary warming effects of global warming due to greenhouse gases have been studied and understood by scientists for some time. But what are the secondary effects?  A proposed secondary effect is that as the Earth warms, ice melts uncovering dark seas and land which absorb sunlight even faster.  But, how much does the reflectivity of the Earth affect global warming? This question became the focus of her science fair project. Yin-Ying and  Maya developed a model for the process of ice melting, that took into account sunlight, ice, and dark soil.   Multiple tests were performed measuring how long it took for ice to melt in different scenarios of how much land is already uncovered.

Maya spent over 100 hours of testing different scenarios and was able to conclude that if ice has melted 2/3 of the surface area exposing dark land, then global warming would proceed 25% faster than if there was no melted ice.   This showed that global warming is accelerating even without any new greenhouse gases being created in the atmosphere.  Reducing the reflectivity of the Earth was determined to be a positive feedback loop on global warming. 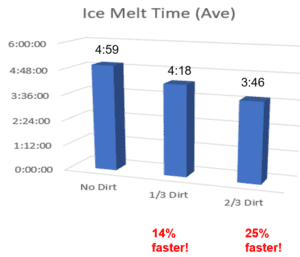 Maya had a great idea, she had great data through her testing,  but she needed a way to present this information clearly, so the implications could be  easily understood. Maya developed a presentation including the details of the research and hypothesis used to develop the project, how the model of the Earth/Sun system was done, and the testing phases.   She charted the data into easily understood graphs showing the proof of her hypothesis. Yin-Ying’s entire family worked with Maya to practice delivering and refining the presentation before the regional science and engineering fair. 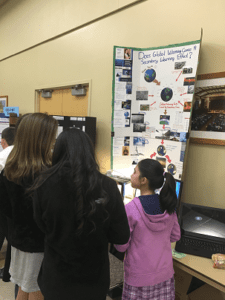 The regional science fair was held at the Worcester Polytechnic Institute (WPI) in April of 2019. There were 138 projects displayed from public and private schools from the central region of Massachusetts. Maya’s project resonated among the judges and she was awarded the grand prize for the regional fair. She was the youngest student to ever receive this honor at the regional fair.

Maya went on to compete in the Massachusetts State Science and Engineering Fair and received a 3rd place award.  As one of the top 10% of science fair projects in the country, she was invited to the Broadcom Masters national online science fair, which will be held in September.  She was also recognized at a June school committee meeting held in Worcester City Hall by Joseph Petty, the Mayor of Worcester, MA and the superintendent of the Worcester Public Schools.

Maya found a voice in the science and engineering fair process for something she felt strongly about. She learned a lot about the perils of global warming, ice melting, and the effects on our planet.   The science fairs gave her a great boost of confidence in being more vocal, presenting her ideas, and raising awareness of global warming. 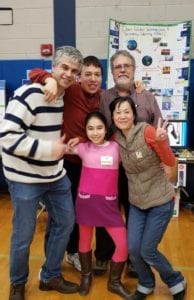 Maya found many ways in her research of how we can help to stop global warming, the first being to speak up and make others aware of the issue and what we can do about it.   She found the two largest contributors to greenhouse gas emissions were electricity production and transportation, which collectively contribute 68% of the total.  She has started to promote various ways we can help stop global warming, by reducing our energy usage and our dependence on fossil fuels while switching to a renewable energy society.

Yin-Ying talked to Maya about how Schneider Electric had been working for years on reducing greenhouse gas emissions through its corporate vision of renewable energy, not only at its own factories and sites but also by offering products and services to customers.

Maya is already working on next year’s science fair by starting on a design of an engineering solution to help reduce greenhouse gas emissions.

Yin-Ying Lu is a lead engineer working primarily on SCADA projects for Schneider Electric in the electric power industry for over 20 years. She has a Bachelor’s and Master’s degree in Electrical Engineering from Worcester Polytechnic Institute (WPI).   She teaches Mandarin language on the weekends to young students and enjoys being the mother of two children, including this very active and inquisitive 6th grader. 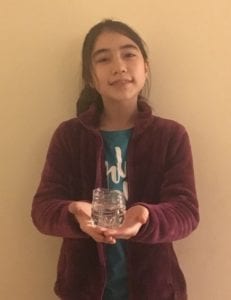 Maya Sushkin recently graduated from Nelson Place Elementary School located in Worcester, MA. She is active in competitive dance, plays piano and saxophone, performs singing, and has a passion for STEM. Her goal is to follow her parent’s footsteps by attending WPI to become a chemist.