Renewable energy has been plagued by some persistent rumors that just aren’t true. Here, we respond to six of the most common.

Has it been a while since you last looked at renewables? If so, you may still think they are more expensive than conventional sources of energy.

In truth, renewables are quickly becoming one of the most plentiful and cheapest sources of electricity. In 2017, 95% of new electricity capacity added to the U.S. grid was renewable and, globally, solar photovoltaic was the fastest growing electricity source of all. Solar power is already cheaper than fossil fuels in nearly 60 developing countries. Earlier this year, IRENA reported that by 2020, wind and solar generation will be the least expensive electricity sources everywhere.

The economics of renewables benefit from technology improvements, efficiencies, and increasing demand. There are also no input costs for wind or solar generation as they do not rely on fuel. By contrast, fossil fuel extraction, transportation, and combustion is expensive.

Complaints about the cost of renewable energy almost always ignore the externalities of fossil fuel generation, which leads to billions of dollars in annual expense from environmental degradation and human health impacts. Fossil fuel subsidization—which amounts to $5 trillion annually—is also generally discounted in arguments about the high price of renewables.

One common complaint about renewable energy is that clean generation kills birds. And while it’s true that turbines do lead to avian deaths, wind farms have one of the lowest rates of impact on birds (and other wildlife) of any form of power generation. Cats, buildings, and cars pose a higher danger.

It’s also worth noting the much greater threat—to birds and all species—posed by global warming, the result of the greenhouse effect caused by excessive emissions pollution. Increasing temperatures are causing changes in bird migration and reproduction patterns, as well as impacting habitats, food and water sources, and nesting sites. In Europe, a warming climate accounts for the decline in 92 bird species, while in North America, 314 species are imperiled.

It’s true that renewable energy does require natural resources. Metals and other minerals must be mined or reused to construct turbines, solar panels, and infrastructure. Transmission lines must be laid. And, ultimately, wind farms and solar power plants require land use.  But just how much? 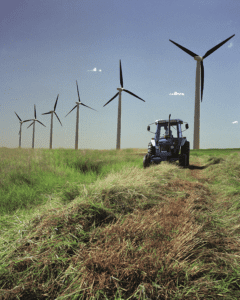 Wind farms, for their size, are very efficient in their use of land. On average, these farms leave up to 98% of land undisturbed, making it ideal for farming or ranching. For the landowners who lease their property to energy developers, wind farming becomes a secondary source of revenue, stabilizing farms and preserving a way of life that goes back generations.

The answer isn’t as clear cut when it comes to solar. It takes about 5-10 acres per megawatt of land for utility-scale solar generation, and studies indicate that solar at scale is more cost effective and efficient. This is useful in arid regions like the American Southwest, where land is unsuitable for other uses, but ideal for solar farming.

However, the magnitude of this land use is significant: an acreage about the size of South Carolina will be required to reduce U.S. emissions by 80% by 2050 with solar alone. However, land impacts can be reduced by siting solar on land already in use—such as landfills, parking structures, and rooftops. This also puts energy closer to where it is being consumed, reducing the need for additional transmission infrastructure and the impact of grid congestion.

4. Renewables can’t provide for all our electricity needs.

“What about baseload power?” is a common question when it comes to renewable generation. Many are skeptical that the intermittency of wind and solar generation can adequately and reliably meet our growing electricity needs—particularly the fluctuations in peak demand that occur during specific seasons and times of day (a supply-and-demand volatility that has given rise to California’s now infamous “duck” curve).

A 2018 research paper published in the journal Energy and Environmental Science indicates that the U.S. could reach up to 80% penetration of overlapping wind and solar resources, and even as high as 90%. When complemented with other forms of new energy, such as hydropower, biofuels, storage, and demand-response the number achievable is 100% or more. Research from NREL finds that the U.S. could achieve 80% renewable energy penetration by 2050, and that this high renewables scenario will meet electricity demand 24/7. 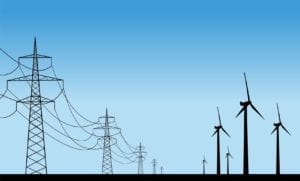 Many countries are already leading the way. Sweden has set a 100% renewable energy target. Costa Rica regularly achieves 90% of its electricity production from renewable sources. Germany has long been noted for its high percentage of renewables penetration, reaching as much as 78% demand with wind and solar.

It’s increasingly apparent that a renewable future is feasible. Renewables are challenging traditional sources of baseload power, including natural gas, and recent research by the North American Electric Reliability Corporation (NERC) show that they are making the grid more reliable, too.

Another myth that continues to plague renewables, and wind power generation in particular.  First covered by popular media in 2012, a controversial and highly debatable new study has again asserted that wind turbines might cause global warming. The study’s flawed analysis was exacerbated by its hypothetical and extreme assumptions of the future energy mix, and the media’s misrepresentation of the findings.

The truth is, the study’s model does not imply that wind turbines add more heat or carbon pollution to the atmosphere, but that they may result in localized temperature increases due to mixing of air layers. This redistribution of heat has the potential to raise temperature profiles of the immediate surrounding area on some nights. One of the assumptions of the study was a high geographic concentration of turbines, and a major flaw was that study authors did not properly account for the scale of land required for each turbine. The conclusion that temporary surface temperature changes contribute to global warming is unfounded and has been refuted.

It’s important to weigh such findings against the benefits renewables bring to local communities and their contributions to reducing climate change-causing carbon emissions. Consider: In 2017 alone, wind power cut air pollution enough to create $8 billion in public health benefits.  And even if wind turbines were a source of global warming, as the study claims, their contribution to warming pales in comparison to our current fossil-fuel driven trajectory.

While it was once true that it was difficult for companies to access renewables, times have changed. Nearly all companies can choose Energy Attribute Certificates (EACs) to address their carbon goals, and companies from every industry vertical are turning to a combination of onsite and offsite renewables generation to achieve their economic goals, ranging from investment to electricity budget stabilization.

Renewables are also increasingly viable in every geographic region, reducing the barriers for companies based in those regions, or with global footprints, to adopt a 100% renewable energy goal.