A way to become an engineer

At the bright age of 15, school student Catherine Anderton was enjoying work experience at a local NHS Hospital training centre. The manager at the time – a family friend – suggested to Catherine that she possessed an aptitude for engineering and that she should consider engineering as a potential career path.

Prior to this revelation, Catherine had wanted to be a chef or a customs officer, however the possibility of an engineering career seriously got her thinking.

Catherine’s parents encouraged her to enter into an engineering career and, back in 1987, such a direction was not common for women. Thankfully, her father was an electrical engineer, and acted as a great role model for Catherine. Full of enthusiasm, Catherine would have her parents pick her up from college twice a week in the evenings as she worked to complete her Ordinary National Certificate  (ONC) in electrical engineering, until she passed her driving test and could manage her own commute.

Starting out her career as a Trainee Project Engineer, Catherine has worked up through the grades and gained impressive qualifications and experience.

A varied and challenging customer-facing role

Now, based in the UK town of Bristol, Catherine’s job as a Project Manager in the End User Business Group which is part of the EcoBuilding Division at Schneider Electric involves managing contracts for customers. The aim is to help provide energy savings wherever possible and ultimately reduce the customer’s carbon footprint.

Catherine works on a number of exciting Building Management System projects for Schneider Electric’s South West end-user projects team, and these projects certainly vary in their size and complexity. She often finds herself on sites at major universities, airports, aerospace facilities and hospitals — just to name a few.

A major project that Catherine is in the final stages of working on is for an aerospace facility in Bristol. “We’re carrying out a commissioning of the building in readiness for a handover. The building comprises of open plan offices, laboratories/fume cupboards and testing rigs/equipment to test/develop airplane wings. We are providing the BMS controls and installation to control the Heating and Ventilation Plant such as boilers, Air Handling Units, Extract fans, Natural ventilation louvres, Fan Coil Units and DX units,” explains Catherine. “The project brings many challenges in management of our sub-contractors throughout its duration, and close liaison with our customer and the client is important for achieving required results on time and on budget.”

Catherine’s role is varied, with each day being quite different. “One day I may be in the office doing paperwork, the next I’m visiting construction sites to survey progress, perhaps resolve technical issues, or to attend design meetings with customers.”

Catherine thoroughly enjoys the interaction with customers and sub-contractors, as well as focusing on general design work where she can put her engineering knowledge to use. Paperwork and Quality Assurance documents, however, she suggests form a less fulfilling part of her role — her passion lies more on the interaction and design aspects of her role.

When asked about some key challenges in for her industry, Catherine believes that IT and digitization – and technology overall – are advancing at an alarming rate and it’s important as a company and on an individual basis to keep ahead of competitors. Further challenges relate to ensuring the best price is provided, and making sure the company remains competitive due to tough competition in the industry, coupled with the reduced budgets of clients for capital build projects. Time management itself, can also prove tricky at times.

“When I started to get recognition from colleagues and peers as a female engineer, is probably a highlight of my career says Catherine. “As a woman on site there have been a few occasions when I’ve had to grit my teeth in times of adversity, until my male colleagues, clients and suppliers realize that I can deliver the work as well as anyone.”

However, Catherine states that these days, there’s a lot more recognition for female engineers, but still not enough women in the field. “I’d love to see more female engineers entering the industry.” 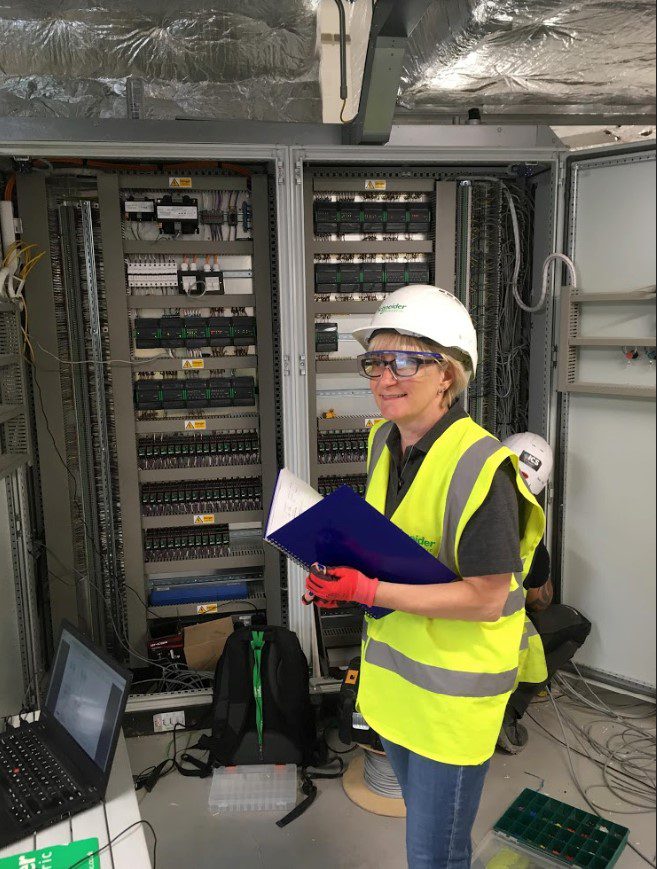 “Schneider Electric actively promotes diversity in the workplace and truly supports women in engineering,” attests Catherine. “The company is flexible with working hours and part-time working – and the people at Schneider Electric are always really helpful. I also appreciate that Schneider Electric can offer you potential job opportunities in other parts of the world. In fact, I’ve known a couple of colleagues who have successfully moved internationally to work for Schneider Electric.”

Catherine states that the company has always supported her career path. “Schneider Electric supported me when I had my children and then again when I returned to work each time via flexible working hours and also being able to work from home. I currently work four days per week, and I work slightly different hours than my other colleagues in our office so that I can collect my youngest child from out of school club each day.”

“Working from home is flexible and depends on my diary each week. Generally I come into the office because I enjoy the interaction with my colleagues, however working from home as an option is definitely helpful during school holidays or if my children are sick,” explains Catherine.

Inspired by passion and tenacity

Outside of work, Catherine is an avid football fan. A a role model of hers is Bill Shankly, manager of Liverpool Football Club who famously quoted: “Some people think football is a matter of life and death. I don’t like that attitude. I can assure them it is much more serious than that” and also that “A lot of football success is in the mind. You must believe you are the best and then make sure that you are”.

A further role model for Catherine is English mechanical and civil engineer, Isambard Kingdom Brunel – an impressive engineering legend when it comes to railway lines and stations, an importantly the Clifton Suspension Bridge & SS Great Britain which are in the Bristol and South West of England area where Catherine resides.

Advice from a female engineer

As a senior engineer, Catherine advises women considering an engineering role to “Go for it!”

“There’s no reason you’re not as good as any one else,” says Catherine. “If you have the aptitude and management skills then go for it. You get as much recognition as men these days whereas in some other industries you still may not. Get on an apprenticeship or graduate scheme, get some good qualifications and work experience at the same time – why wouldn’t you want to? For me personally, I don’t want to work anywhere else but there is so much scope now for engineers to work all over the world. I know a few people who’ve move to Perth and Brisbane with Schneider and absolutely love it.”

Reproduced with permission from Where Women Work that features prime employers for women.

Interested in finding out how your engineering skills might be valued? Research the wide range of exciting career vacancies at Schneider Electric and see where your enthusiasm might take your own career.

Life as a Female Engineer at Schneider Electric

Challenging the Status Quo as a Female Engineer in Indonesia

Life is On, the Story of an empowered female engineer from South Africa

Teach Men That You Are an Engineer, Not a Female Engineer