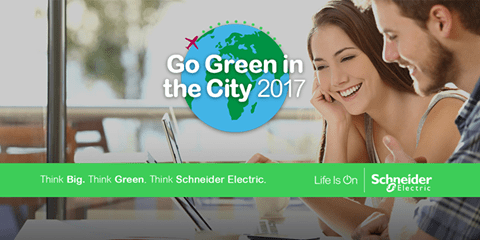 We have Nimisha Gupta recounting the whirlwind and memorable stream of  events through 2017, as she and her partner, Raja Jain won the global competition.

While cursorily screening our College’s digital Notice Board on one of the days, I saw a colourful notice with a link, this notice immediately caught my eye. It read “Go Green in the City 2017 – Think Big. Think Green. Think Schneider Electric”. Considering the current energy crisis, the world is ensnared into and being cognizant of Schneider Electric’s belief that ‘Access to energy is a Basic human right’, I thought that it would be something interesting. I delved more and found that, Go Green in the city is Schneider Electric’s flagship sustainability themed event for students at College. This competition is not just organization’s effort towards fostering innovation amongst students but also is a reinforcement of their commitment to Gender Diversity, it was difficult to believe that a pre-requisite to partake the competition was that at-least one of the two team members must be a female. Ever since, my life has not been the same.

The Competition and Inception of the Idea

My team mate ‘Raja’ and myself registered for the competition in February, 2017. We had to submit 300 words extract on the idea we would work upon. We named it ‘EvaCool’ which derives its name from evaporative cooling. We have used ancient Indian earthenware technologies to drop the temperature of air. The organizing team kept us engaged through various contest and quizzes they were conducting online on the GGITC website.

Structuring the Idea along with the assigned Mentor

The actual development of the idea to a full-fledged product begun during the Semi Finals. Schneider Electric allotted a mentor to every semi-finalist during this phase. Our mentor was Alexey Kashaev, Vice President – Eco-Building in Russia and CIS. He refined our idea, reviewed our documents and most importantly, motivated us to do better every day.

The Big news came; we were selected as one of the 12 Global Finalists for Go Green in the City 2017 out of 20000+ registrants. We were going to represent India at the finals. And yes, we were going to PARIS!

Alexey continued to guide us as he brought various incisive business perspectives to our product.

While we were preparing for this, Schneider Electric India organised a Campus Ambassador program ‘Campus Ace’. The organization had chosen an ambassador each from all of their partner colleges and had invited all of them for an event at Gurgaon. We received a call from the university hiring team, they invited us to this event and gave us an opportunity to present our solution in front of organization’s leaders and students of different colleges. 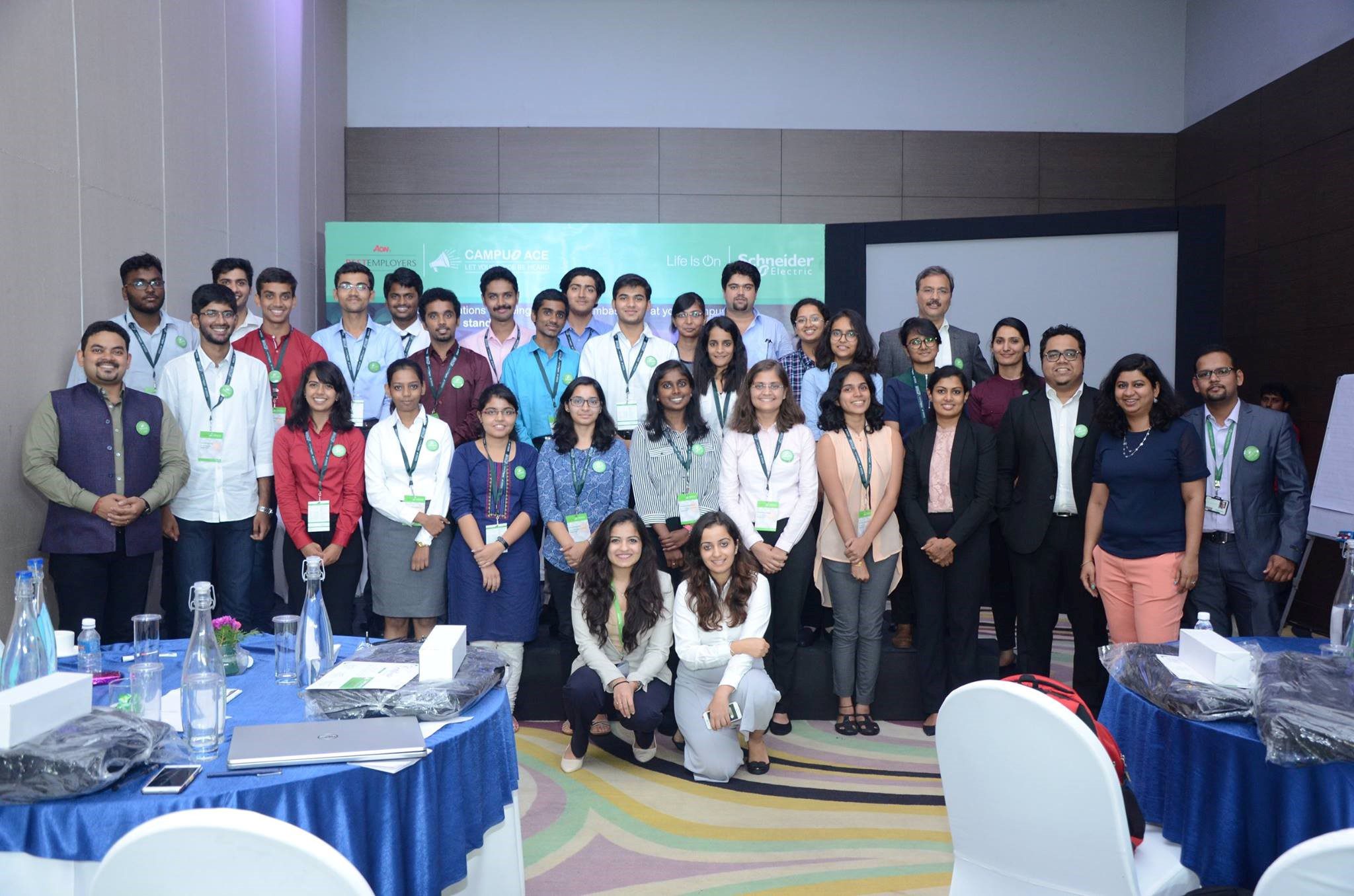 During the event, students had several interactions with leaders who briefed us about the organization and its work. They also shared their stories and inspired us, this was followed up with a business simulation game and a marketplace where we experienced several products and solutions of Schneider Electric.

Icing on the cake was that we learnt about the remarkable work of ‘Schneider Electric India Foundation’ and since our product also targeted rural population of India, it later helped us in devising our business model.

Hurray! We were flying to Paris on October 8th, an all-expenses paid trip by Schneider Electric was up on the cards. Whilst our exhilaration knew no leaps and bounds, just a thought of presenting in front of a global audience gave us goose bumps. This made us a little nervous, nevertheless, we did not want to leave any stone unturned; as they say ‘What you seek is Seeking you’, the University Relations team of Schneider Electric reached out to us, they were facilitating a webinar for us with Arindam Sen, Senior Vice President – Schneider Digital. The objective of these webinars was to assist us in finetuning our presentation to make it more effective for the finale. This activity proved extremely propitious and gave us confidence to move forward.

Once in Paris. we were greeted by Ruby and Matthias with awesome welcome goodies. The next day the team had organized a visit the Louvre Museum and the Eiffel Tower. Here is a breathtakingly beautiful view from the top of the Eiffel Tower. 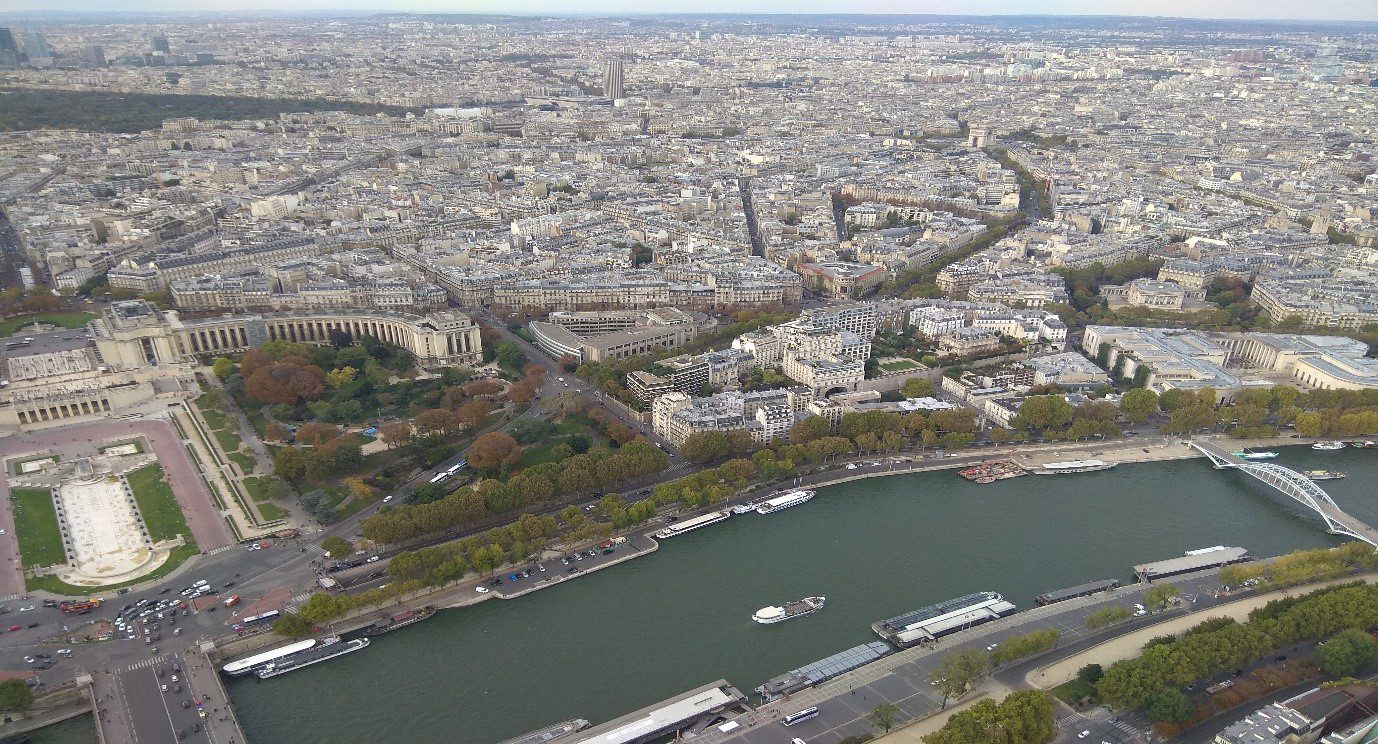 The next day i.e. October 10, we went to Versailles Museum which was followed by a lavish lunch. In the evening, we attended the opening ceremony (the traditional wear ceremony) in which we introduced ourselves and were addressed by the leaders and the team.

On the D-Day, we had to make our 18-minutes long presentation followed by a 5-

minutes long intensive Q&A session. The jury panel consisted of 10 leaders from Schneider Electric, these leaders also were eminent people of the corporate world. We presented our idea and business model along with a small prototype demonstration. All-in-all it was an amazing experience.

The results were announced on October 12 and BOOM – our hearts skipped a beat! Raja Jain and Nimisha Gupta emerged as winners of ‘Go Green in the City 2017’. We wanted someone to pinch us to believe that it was not a dream. This was absolutely beyond our imagination when we started this voyage but then ‘We Had Done It’!

The perks of winning are huge. We also have a chance to visit any two of the global offices of Schneider Electric and network with the people who work there. Innovation and Feasibility go hand-in-hand in this competition.  To sum it up all, we would like to share our two cents ‘No idea is small, you must never stop believing in your idea’.