Henrik told me that StruxureOn is a new departure for the company: “We introduced it in North America back in July and it’s actually a cloud based digital service that helps our customers to monitor their data centers and get all the information they need on their smart phones in a fast, easy and really smart way.”

I was interested to know how this smart and online service differs from established approaches to monitoring the data center. Henrik said, “Traditional monitoring, at least in the DCIM space and the data center space, has been an on-premise activity. Since everything is happening on the inside of the firewalls, customers had to maintain their own systems, do all their own monitoring and deal with the analytics themselves in order to understand what’s actually going on the data center.”

Henrik told me that with StruxureOn, Schneider Electric enables the data to be securely and automatically uploaded outside the customer’s domain into the Schneider cloud. From there, Schneider people sitting within service bureaus and network operating centers are looking at the data and helping customers be more proactive and predictive about what is happening in the physical layer of the data center. 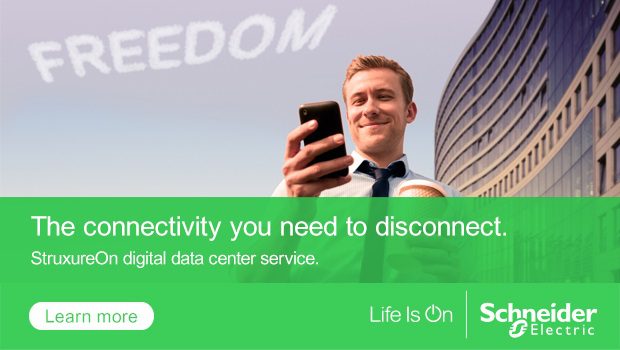 With respect to the optimum size of business customer which can benefit from the StruxureOn solution, Henrik explained that “it is basically for everybody and initially we have seen smaller companies being really, really early adopters of cloud based digital services and maybe have a staff that they want to re-utilize for something else rather than maintaining on-premise software.

“So, this is an easy way of going this route, switching to a cloud-based model and letting Schneider Electric manage everything for them. But we do also see that larger organizations – especially banks and financial services, as well as the public sector including education and government – that they want to have something where Schneider is involved. These are typically bigger corporations.”

Given that traditionally the IT community has been quite receptive to things like Apps and cloud services, I was also interested know how things like digital services can help the data center community to become more accustomed to and to accelerate their use of the cloud to manage their facility infrastructure.

Henrik told me, “Before we launched the offer we chose a strategy of going mobile first. This means that right now StruxureOn is only available on smart phones, Android and IOS. When we visit our customers we’ve noted that even when they’re away from their desks and computers, facility managers and data center managers always have their mobile devices with them. We created our technology to use the technology they already have in their hands. They just need to download an app to start getting results.”

Henrik summed up saying, “we definitely see StruxureOn as closing a gap – you suddenly see lots more from your data.  You can see different patterns emerging, and different trends and so on that you couldn’t see before. So now you can more easily see what you have in your data center, what its’ health is. This in turn can help you to visualize how useful a larger DCIM system would be – which is really where you want to go if you want to really mature the operation of your data center.”

What’s the Appeal of Cloud-based DCIM for Data Center Monitoring?