One of the megatrends that have been identified for the next decade is geographical shift. In 2010, new economies represented half of the world’s GDP and by 2015 they will represent 65%. Each week nearly 1.5 million people move to cities, almost all of them in new economies. We are seeing a huge shift with the emergence of new economies. It is said that 90% of the world’s urban population growth will take place in developing countries, with India taking a significant share of that. 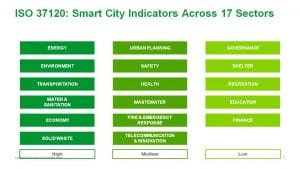 to gather a lot of momentum. In order to ensure that the urbanization is sustainable and has a smaller energy footprint, the new upcoming cities need to be “Smart”.They need to be energy efficient, resilient, agile, and citizen friendly. But is there a way to measure the “smartness” of a Smart City. On what parameters should we build a new city for it to be a Smart City?It is extremely important that policy makers, urban designers/authorities, solution providers, and other key stakeholders agree on a common quantitative and qualitative framework that has a set of common definitions and performance indicators that are accepted and agreed by the above stakeholders.

There are few existing standards that address this – Green City Index and ISO 37120:2014. The Green City Index series is a research project conducted by the Economist Intelligence Unit (EIU). It seeks to focus attention on the critical issue of urban environmental sustainability by creating a unique tool that helps cities benchmark their performance and share best practices. This index is good to start with but does not cover all the aspects of a city. It cannot be used for design or operation of the city however it might be useful for reporting purposes.

On the other hand, ISO 37120 establishes a set of standardized indicators that provide a uniform approach to what is measured, and how that measurement is to be undertaken. It is spread across 17 themes such as Energy, 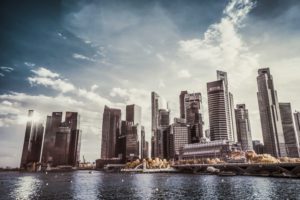 Environment, Water and Sanitation etc and has 46 core and 54 supporting indicators that cities either “shall” (core) or “should” (supporting) track and report. The standard can be used as a critical tool by city managers, politicians, researchers, business leaders, planners, designers and other professionals to promote livable, tolerant, inclusive, sustainable, resilient, economically attractive and prosperous cities globally.

ISO 37120:2014 provides city leaders and citizens with a set of clearly defined city performance indicators and a standard approach for measuring each. The economy parameter will look into the city’s unemployment rate and also at the percentage of city population living in poverty. The environment parameter will measure all types of emissions in the city measured in tones per capita. The energy parameter will have a lot of metrics as its one of the most key elements for measuring how clean, green, efficient and livable the city is. It will measure the total residential electrical use per capita (kWh/year), energy consumption of commercial buildings (kWh/m2), percentage of energy derived from renewable sources as a share of the city’s total energy consumption , etc. Similarly transportation, water and waste management will be amongst the top few high priority indicators for measuring the performance of a Smart City.

Although ISO 37120 appears to be a high level framework to map and measures the various metrics of a city, it still comes out as a very good tool for city authorities to begin the measurement of such parameters.

Thank you for reading, and if you would like more information on Schneider Electric’s solutions for Smart Cities, visit our web site.

Building cities of the future… because cities are the future

Paving the way to Smart Cities

Re-urbanization Is Driving the Need for Smart Cities