Like PRP, the High Availability Seamless Redundancy Protocol (HSR) applies the principle of parallel operation to a ring interconnecting IEDs with two links. HSR relies on ring topology, sending data not over two networks but in both directions of the single ring. 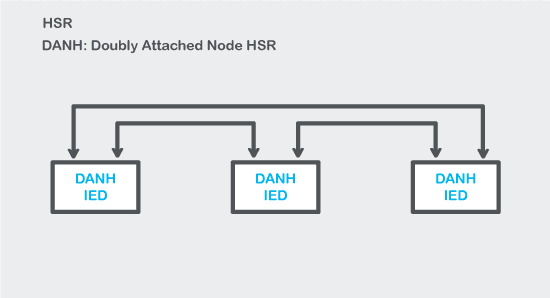 Unlike PRP, however, HSR does not allow single and double network attachment devices (non-redundant and redundant devices) to be mixed on the same LAN. Because of that, laptops and workstations must be connected to the network via a dedicated redundancy device called a Redundant Box (RedBox).

These are the principles of HSR:

In other words, if an IED fails, its protection function and the communication redundancy are lost, but the other IEDs continue to communicate, protect, and control the electrical equipment through a single communication network.

Because HSR forwards all messages from all IEDs, the communication bandwidth is proportional to the number of IEDs. Each device needs to send not only its own messages but also pass along all messages coming from all other IEDs. Therefore, HSR is limited to about 16 communicating devices.

HSR, like PRP, is also plug & play. And because it employs single ring topology, additional switches are not needed. That makes deployment less expensive than PRP.

My next post will cover strategies for combining both PRP and HSR protocols. For more details, you can also read my latest white paper about Optimizing Protection and Control Schemes Based on GOOSE Messages.