PRP relies on the parallel operation of two local area networks (LANs). It allows a mixture of both redundant and non-redundant equipment on the same network. 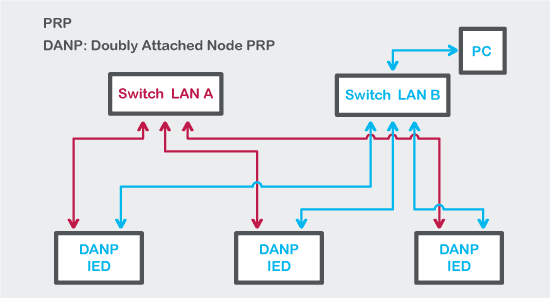 These are the operating principles of PRP:

When applied, those principles amount to this: If an IED fails, only its protection function is lost. The other IEDs continue to communicate over the redundant LAN to protect and control equipment. And if a switch fails, communication redundancy is lost, but not the protection and control functions. That’s because messages sent on the healthy network are not disturbed.

And because PRP uses a double star topology, the communication bandwidth on each star made with a single link is not different than for a non-redundant network. PRP can thereby accommodate more IEDs than HSR (High Availability Seamless Redundancy Protocol).

Finally, the PRP protocol is also plug & play. In other words, no special network engineering is required. However, additional switches are required to build the double star network infrastructure, making PRP deployment costs higher than HSR.

My next post will cover the details of the other active redundancy protocol, HSR. Or read my latest white paper for information about Optimizing Protection and Control Schemes Based on GOOSE Messages.