At Schneider Electric’s Power to the Cloud event, I had the pleasure of speaking with Dr Arwa al-Aama who is the Vice Mayor, Information Technology Affairs, Jeddah Municipality. Dr al-Aama has appeared elsewhere on this blog, providing “The Voice of the Next Generation CIO.”  When we met in Dubai, I was interested to find out from her how the idea of a Smart City translates to what they are hoping to achieve in the city of Jeddah, Saudi Arabia. 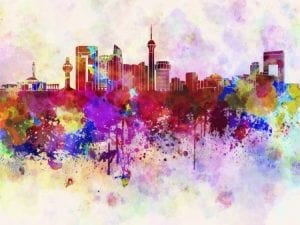 Having earlier participated in a panel discussion about Smart cities, Dr Arwa said to me that she thought individual cities ought to decide for themselves what would define a smart city within their own context.

Dr al-Aama went on to compliment the “Power to the Cloud” event for how it had managed to bring together many of the components of Smart cities such as health, education, power, water for attendees to see in person the kinds of solutions Schneider Electric can deliver. She went on to say that in her own mind “unless all of these components become Smart it will be very difficult for a city to become Smart. I believe that the integration between all of these components will be key in order for Jeddah to become smarter”.

Jeddah is developing its Smart city strategy right now. Dr al-Aama explained that the plan is that the strategy will cover the next 20 years, but she added that “we also know that every 2- 3 years we will need to go back and re-look at it again as technology changes and we’re trying to get basic guidelines so it will be a roadmap. However, we are not going to stop there having simply delivered a strategy, we’ll go back and review it”.

“The idea of our strategy is to have the basic components (for Jeddah) become Smart,” said Dr al-Aama. “One of the outcomes of our strategy is to create examples, such as a green field area and a brown field area of Jeddah, and then make them smarter. Then to work on creating smart applications and solutions in other layers as well. These projects will allow us to create prototypes and will allow us to make sure we’re on the right track.”

One of the interesting things I saw in Dubai was the fact that the Smart city initiative has the sponsorship of Royalty, so I asked Dr Arwa so I asked if that kind of endorsement or support from the highest levels of government would also help or happen in Jeddah. Dr Arwa explained that it wasn’t possible to compare Dubai to Jeddah as their situations are different.

Dr Arwa explained: “Jeddah is just one of the cities in our country and the financing for Jeddah comes from our Ministry of Finance, not directly from the city”. The governor for Jeddah and its surrounding area has already developed a panel for Smart cities and the city’s mayor is a member of that panel. The panel is relatively new and Dr Arwa said “that we’re all working together to help achieve it (the smart city objective), but it’s a long, long way and every city has to work out what’s best for it”.

To reinforce her point, Dr Arwa highlighted that His Highness Shaikh Mohammad had announced the ambition for Dubai to become a Smart city as making the country as a whole would be too big a project. Dr Arwa did stress that having both top down and bottom up leadership behind and focussing on Smart cities would be very helpful in enabling the city of Jeddah to realise its Smart ambitions.

The conversation with Dr Arwa really illustrated the impressive commitment there is across the Middle East to usher in the benefits of smart cities and to making the lives of their citizens benefit from leading edge technologies and infrastructure. Whilst many countries struggle to simply maintain their infrastructure, right across the Middle East, countries and conurbations are powering ahead to bring the best 21st century thinking  to their cities. It’s going to  be fascinating to participate in what’s likely to be an amazing next 20 years in the region.

The Voice of the Next Generation CIO

A Rough Guide to Power to the Cloud

Are Smart Precincts a Driver of Future Smart City Growth?