Since the devastating Fukushima disaster of 2011, Japan has struggled to develop a comprehensive energy policy that will satisfy the majority of its citizens. Some people advocate re-commissioning the country’s nuclear power plants. Others argue that safety and high cost make nuclear the technology of yesterday. Debates rage over the potential for renewables as well as increasing imports of natural gas.

But there is one aspect of the energy policy that gets almost universal agreement: efficiency works. Look at the chart below from Justin Guay at the Huffington Post. Efficiency measures have made up nearly half of the power lost when the country’s nuclear plants were closed. 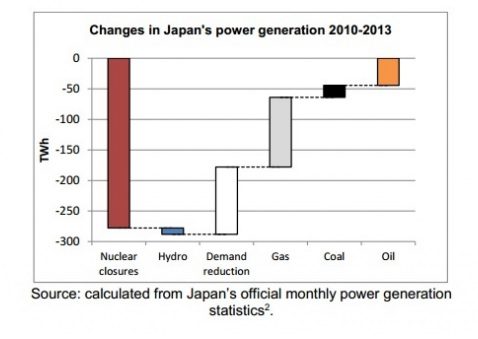 Some of the efficiency measures are fairly basic. Individuals and businesses have been asked to turn down their lights and air conditioners. Office dress codes have been relaxed because employees who are not dressed in a suit and tie don’t need as much air conditioning. In fact, it could be the first time in history that Casual Friday has been part of a national security initiative. Japan’s famed automatic toilet seats have been shifted to manual.

But businesses have begun to adopt more sophisticated technologies. Industrial demand response, which effectively allows manufacturers to arbitrage their power consumption, is starting to be incorporated into factories. Power loads can be shifted within a five second window thanks to automation and data analysis, permitting factories to cut their costs without impeding operations.

Overall, Deutsche Bank anticipates that these changes collectively can save 133 terawatt hours a year or as much power that would be produced by 17 one-gigawatt power plants.

Japan’s experience in many ways illuminates what I believe will be one of the major economic and industrial trends of the coming century and one that Schneider is uniquely poised to drive forward. The 19th Century marked the Industrial Revolution when we first figured out how to harness machinery and energy to mass produce the necessity of life like homes, fuel , food and clothes. Some even called this the Age of Ingenuity. The 20th Century became the Information Age because people mastered ways to harness large sets of data to solve unwieldy problems.

In the 21st Century, we are going to see eye-opening solutions to ordinary, everyday problems brought about through creatively applying efficiency, resource optimization, predictive analytics, robotics, automation and other technologies. Look at it this way: energy consumption is expected to rise by 56 percent by 2040, while food demand is expected to double by 2050. People aren’t going to give up power or ration food. Instead, we are going to be doing things more efficiently and more intelligently, most of the time without even knowing it. We’ll see information and ingenuity coming together to find enitrely new approaches. Call it the next “Age.”

Consider electric light. Thomas Edison invented the light bulb in 1879, and it was an immediate hit. Streets became safer. Hospitals and office buildings could stay open late at night. Kids could study longer. But light bulbs are also far from perfect. Traditional incandescent bulbs waste tremendous amounts of power: over 90 percent of the electricity gets dissipated as heat. They only last about a year. And that onerous power consumption means that more than 1.6 billion people in Latin America, Asia and Africa still read by kerosene lamp. They really are the last remnants of the vacuum tube era.

Enter solid state lighting. LEDs consume 75 percent less power than some of their traditional counterparts and can last for 20 years, which will expand the market. But just as important, they are miniature computers: an LED is essentially a semiconductor that just happens to emit light. As a result, LED bulbs can be linked together in a high-speed digital network. Traffic lights will be capable of transmitting real-time information about traffic congestion or accidents, saving time and possibly lives. In offices, they will dim automatically when you leave your desk, or adjust automatically to your personal preferences.

As I mentioned earlier, Schneider is uniquely positioned to drive and capitalize on these trends. Not only do we have an extensive track record in efficiency and automation, we have extensive alliances across multiple industries. Breakthroughs aren’t going to occur in isolation. They are going to require collaboration and feedback from manufacturers, customers and, ultimately, end-users. Experimentation will run rampant. It will also be global. Numerous advances in technologies, such as microgrids, will likely occur in rural areas far away from corporate labs.

It’s going to be a whole new way of looking at things.

How big are Power line losses?