This blog series is about training for a marathon and how a less-than-athletic, self-proclaimed sustainability & intelligent energy evangelist relates energy waste to sore limbs.

Well, I did it. On Sunday, April 6, 2014, I completed the 42.2km Marathon de Paris in 4:32:30. It was the longest jog of my life and as I write this post I’m not sure I will ever run a marathon again. But who knows, maybe once the burning sensation in my thighs stops or when the bottoms of my feet stop pulsating, maybe, just maybe, I’ll want to challenge myself again in what was arguably one of the longest and toughest physical tests that my body has endured.

I ran the first 27km without walking, and the first 17km with a good friend of mine (who also, I’m proud to say, finished the race).  Around the 32km mark, I began to feel my hip flexors tighten up with a pain that I had never felt before. This aching forced me to walk but when you start to walk after running for 3 hours straight you begin to feel a different type of throbbing in your legs since they aren’t used to the alternative shorter strides of walking. Needless to say, the last 10km were the most difficult and each kilometer seemed to pass by slower and slower. That is until you get to the last 2.2 km. I’m not sure what exactly happens when you see the 40km mark, but you can taste the finish line and you can sense how close you are to completing this monumental task that you’ve spent months preparing your body for. The thought of moving one foot in front of the other takes precedence and you only hear the cheering of the crowd from the sidelines. You hear the global community calling out your name reassuring you that you’re so close to the finish. All marathon bibs have your first name and country on it, so you hear spectators calling you out personally which makes you feel as though you’re not alone and that the whole world is behind you… “Allez Nick, allez!” 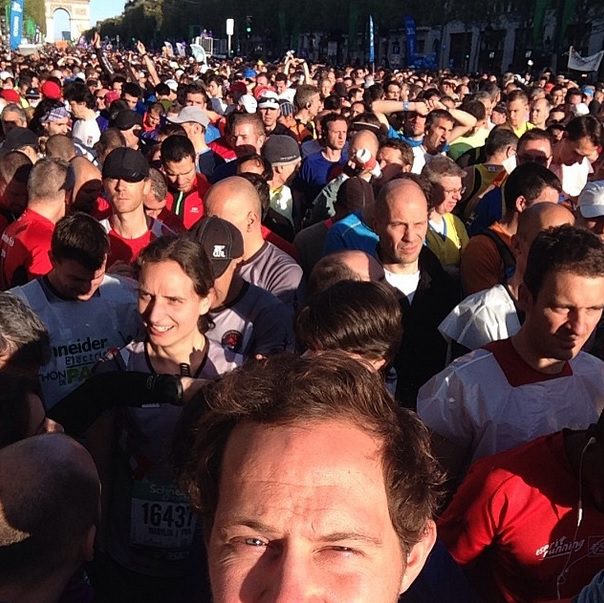 The experience of running with 50,000 people is surreal. You’re always surrounded by hundreds of runners, and your vision is filled with a sea of people as far as the eye can see ahead as well as behind you. The aggregate energy that you feel from all the participants is something that you can’t really describe in words. When the pain in your hip flexors makes you walk, you walk; but within minutes of walking several other runners from various nationalities have patted you on the back and cheered you on in their native language not caring if you understand them; yet knowing that you do – this universal support and understanding of what you’re going through enables something within the human body and mind to keep moving towards that vision of success of completing the race.

Since more than half of the global population lives in cities, it makes you think of the various conditions and environments each runner trains in. From Beijing and Nairobi, to Berlin and Vancouver each city offers it’s own unique setting. However, every city around the world shares the commonality of having an increasing thirst for energy. The most recent International Energy Agency report states that the global energy demand will double by 2050, while at the same time an IPCC report indicates we need to half our global CO2 output to avoid dramatic climate change. There is a growing renewable energy industry but solely focusing on the electricity generation side will not equate to a silver bullet to address our current energy dilemma.

Focusing on the consumption side of the energy spectrum must be at the forefront of any strategy to address our current energy dilemma. A lot of my friends ask me, “What can I do? I’m just one person. Will turning down my thermostat and turning off my lights really make a difference?” And my answer is always, “Yes.”

In my first post I discussed how everyone and every organization needs to have a starting point – that being said, the starting point for a family is different than the starting point for a large organization or city. That starting point is not a precursor to success or impact, the notion of starting or not starting really is. It may be tough to keep energy on the top of your mind if you’re not directly involved in the energy sector through employment or education, but yet everyone, at least in the developed world, is involved in the energy sector as consumers. Turning down your thermostat and switching off the lights at home does make a difference as that energy that would normally be wasted is left on the gird to be used elsewhere in the form of a negawatt. A negawatt is the theoretical unit used to express the amount of energy saved resulting from energy conservation and increased energy efficiency. And when you aggregate the negawatts produced by families taking proactive action to reduce their energy waste you see dramatic results. In some parts of the world this aggregate energy that is available to be sent back onto the electrical grid is treated as a “Virtual Power Plant” and utilities ask consumers to reduce usage during peak times so that they can maintain stability on the electrical grid to avoid costly blackouts or brownouts.

The idea that the whole is greater than the sum of its parts is not only evident on the electrical grid, but it’s also seen during a race the size of the Marathon de Paris. The combined energy and enthusiasm of the thousands of runners can eclipse one single elite runner; similar to how thousands of smaller buildings saving a little bit of energy and sending it back to the grid can have a dramatic impact on the overall energy network. It may not be the elite or larger energy consumers that shape the new energy paradigm, but the individual ones, combined en masse instead.

Schneider Electric is this year’s sponsor of the Marathon de Paris, a world class race with over 40,000 runners that will take place on April 6, 2014.

In this blog series, I will share some of my personal experiences in preparation for this momentous event. I will also be sharing some juicy tidbits on what “intelligent energy” really means and how best practices can really help to save you money.  This blog series can be found by searching “#ParisMarathon2014” in the search field (top right of the blog site) or by looking up ‘Nick Blandford’ in the bloggers directory to discover all blog posts I’ve published including this series.  I can be found on twitter (@nickblandford) and most of my training runs have been recorded under ‘Nick Blandford / Victoria BC’ on Strava, which is a free app that lets you track your runs via a mobile device and helps you analyze and quantify your performance.

Were you at the Marathon de Paris?  Have you trained for a marathon? Feel free to share your experiences below.

It’s all about Running Marathons and Conserving Energy

Running a Marathon or a Business? How Technology Impacts the Success of Both

INFOGRAPHIC: The global race to energy efficiency starts with just one step