Demand Response, Variable Pricing, and Time of Use are three tools used by utilities to reduce energy consumption, and are part of the emerging idea known as the smart grid. Demand Response involves users agreeing to engage in certain energy saving activities such as turning off electrical loads or changing air conditioning set points during peak demand times, usually in return for some sort of financial incentive. Variable Pricing encourages the same thing by making electricity more expensive during peak demand times. Time of Use is similar to Variable Pricing, but the periods are contractually fixed, so that the user knows in advance exactly how much electricity will cost during each time period. All three can be seen as inputs to the smart grid’s conceptual Green Generator. Unlike traditional generation sources, which rely on some form of fossil fuel, the input for the green generator is simply a reduction in demand. Renewable generation sources are an improvement over traditional sources, but also require manufacturing, distribution and maintenance.

The green generator is not a physical device, and the output is so called ‘Negawatts’, which are used to quantify the demand reduction. It may seem strange to use a technological concept to represent an idea as simple as ‘use less’, but evidence of any real conservation is nearly impossible to find among current conservation techniques. US-citizens, who represent around 5% of the world’s population, account for an astounding 20% of global energy use. The ‘use less’ message, if even present, isn’t being heard. Although ambitious ratings systems such as Energy Star and LEED have emerged, there has been a dramatic increase in appliance ownership and residential home size, as well as a decrease in the number of occupants per home. The net effect is that we are using more energy, not less, despite the gains in appliance and home efficiency (although the rate of increase has not quite kept up with population growth, which is one positive trend). The green generator idea, along with the smart grid as a whole, is an attempt to tackle the true problem: behavior change.

As stated in the intro to the winter 2013 edition of Strategic Planning for the Energy and Environment, “energy conservation is the first and most important base of the energy management pyramid. It is by far the cheapest ‘new energy source’ available to us today since most of it involves changing attitudes and making simple changes on existing control schemes”. Behavior change could in fact be called the true input of the Green Generator, and smart grid strategies such as demand response, variable pricing, and time of use are tools that drive this change. The challenge for energy service providers is to package the technology in a way that is attractive and easily accessible to the end user.

One last important concept when considering the advantages of conservation is peak demand. The utility must provide enough capacity to meet projected periods of peak demand, even if such capacity is only needed for short periods of time. Energy management systems allow for a targeted reduction in peak demand, which can significantly reduce the amount of necessary capacity. 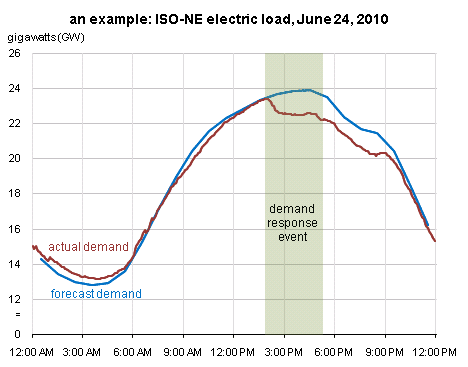 As can be seen in this image from the EIA (Energy Information Administration), reducing demand is the most direct way to reduce the need for environmentally harmful energy sources, such as coal, natural gas, and nuclear power.

Have you or your organization been involved with Demand Response, Variable Pricing, and Time of Use?

There is no TEAM in SMART GRID. Five E’s can change that.

Managing the grid, one house at a time