When facility owners receive their electrical utility bill at the end of each month, many with outdated electrical systems have very little visibility into how those costs are generated.  It is impossible for them to determine which processes are responsible for generating most of the electrical expenses. Without smarter digitized power systems, owners decrease their ability to control their cost and profit margins. 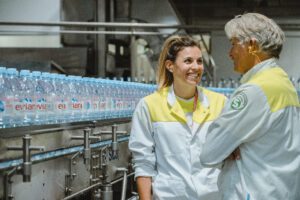 A third vector to consider when evaluating electrical distribution systems is the overall serviceability of the installation. Easy serviceability is one of the main drivers of maintenance personnel efficiency.  Antiquated equipment makes it harder to diagnose a problem and more time is needed to secure parts and perform fixes once the issue is identified.

However, many organizations hesitate to modernize because electrical distribution system upgrades have traditionally been costly and disruptive to operations. Fortunately, technological breakthroughs now allow for more pragmatic, more sustainable approaches to upgrading electrical systems. A new circular economy approach of “retrofit, refurbish, and recycle” is taking hold that minimizes waste while lowering the cost of electrical system upgrades.

In addition to the environmental benefits, retrofitting switchgear can provide a cost savings of 43% to 65% over installing new equipment. Re-using cubicles, busbars, cables, and accessories eliminates the costs of purchasing new equipment and safely disposing of old units. Retrofits minimize construction work resulting in faster installation. The less complex installation often translates into lower instances of human error and fewer hours of costly production downtime. The project can include equipment upgrades with sensors that connect to a cloud platform for data analysis and insights that improve performance and efficiency, decrease energy costs and CO2 emissions, and further lower the total cost of ownership.

Consider the recent example of Danone evian, one of the world’s largest food and beverage organizations. Over the last several years, Danone evian has applied circular economy principles across its electrical system operations. The company decided to modernize its bottling facility to deliver its mineral water more sustainably. Their key challenge was to maintain continuity of operations while modernizing electrical assets.

Danone evian enlisted Schneider Electric and deployed the Schneider Service and Modernization Plan. The companies signed a 7-year contract with a fixed annual fee for both modernization and maintenance of the electrical installation. This way, Danone evian gained better control of its operating budget while achieving the highest possible uptime.

As a result of these efforts, the Danone evian manufacturing site was recognized as “Certified Carbon Neutral” by the Carbon Trust. In addition, energy consumption was reduced by 34% between 2008 and 2020. Those savings translated to an estimated savings of 315 metric tons in CO2 equivalent and 372 m3 of water.

Today, it is clear that the circular economy serves as an alternative to the traditional and more wasteful industrial model. At its core, it’s about optimizing resources and extending the lifespan of products to make them fully functional for as long as possible. Because you’re replacing only a portion of the existing electrical equipment, there’s no need to manufacture new cubicles, busbars, cables, and accessories, further reducing CO2 emissions, primary resource consumption, and freshwater usage.

When is the right time to retrofit?

For manufacturers, the likelihood of unplanned and costly downtime increases every day as business demands and wear and tear take their toll on internal electrical systems. Paying close attention to critical indicators like equipment phase-outs, rising maintenance costs, visible wear and tear, new regulatory requirements, and the need for reliable equipment supporting critical processes can all be a part of modernization decisions.