One of the clear indicators of corporate leadership on energy and sustainability is the recent acceleration of publicly announced goals. Many companies have made quantifiable and measurable commitments to reduce their impact on the environment while simultaneously reducing operating costs and improving economics.

Third-party reporting and benchmarking programs are growing in both size and significance. Consider: More than 500 companies worldwide have already set science-based carbon reduction targets via the Science-Based Targets Initiative (SBTI), while 63% of companies have set a clean energy procurement goal.

The trend toward public goal setting was recently validated by research conducted by Schneider Electric and GreenBiz. More than 300 energy and sustainability industry professionals shared what motivates their companies to action and the barriers that stand in the way. Their responses revealed that publicly announced energy and sustainability commitments help companies move more quickly and realize financial, reputational and other advantages.

Take our energy & sustainability progress assessment to see how your company compares to those surveyed.

Who’s committed and why

More than half the companies surveyed by Schneider Electric have made public commitments to reduce resource consumption or improve sustainability, while another 9% are considering setting a goal soon. Of those companies that have made a commitment, about half have also set targets under a rigorous or externally-audited standard such as SBTI. 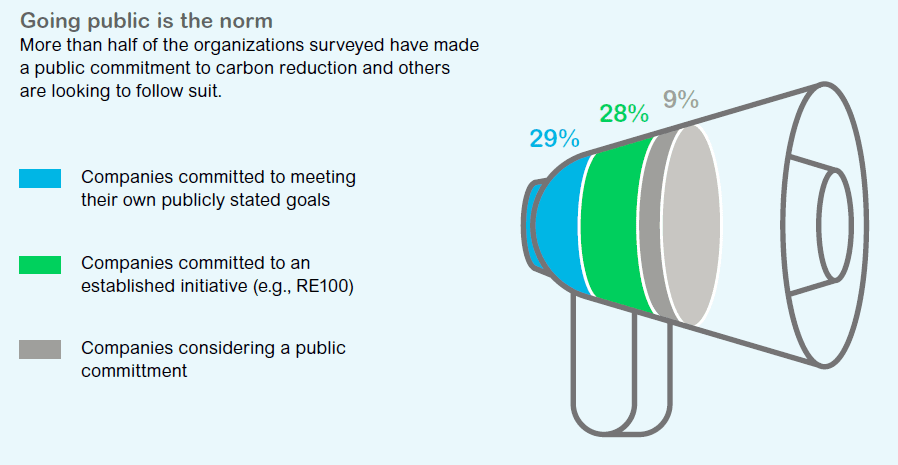 Companies that have committed to a public target cite a variety of motives. For instance, 42% of responding organizations view customer and investor expectations as a driver, while only 5% of firms without public commitments do. 44% of respondents are also motivated to set public goals because of environmental concerns whereas only 21% of firms with no public goals said this was a consideration.

The imperative to set public goals has also become a competitive differentiator. By publicly announcing their goals, companies receive the attention of media and consumers, and some have even gone so far as to call out others in their industries in public forums to spur greater action.

Organizations that make public energy and sustainability commitments find that they are more successful at securing funds for related projects and find that their business cases for these projects are also better.

They are also more likely to adopt emerging technologies like distributed energy resources. For example, only a minority of companies surveyed have implemented advanced technologies like batteries for energy storage and load curtailment, but about 50% of those setting public goals have done so.

It may be data that drives the difference. Most third-party standards for public energy and sustainability goal-setting require both a performance baseline and the routine collection and transparent disclosure of progress data. With better data on environmental performance, companies may be able to build more credible estimates of the financial and non-financial benefits of adopting innovative technologies.

Firms that set goals may also be more forward-looking, or more motivated, both of which may drive these companies to investigate advanced technologies like fuel cells and microgrids.

Regardless of the reason, the research is clear: Companies that want to accelerate their action on energy and sustainability find greater success when they set, and announce, a public goal.

Not sure which goal(s) might be right for your organization? Our new goal setting guide shares more.

Many companies have realized positive benefits from setting public goals. One example: Schneider Electric client Fifth Third Bancorp. In 2018, Fifth Third became the first Fortune 500 company and first bank to sign a solar power purchase agreement (PPA) to achieve 100% renewable energy. The company also joined the RE100, a corporate renewable energy procurement initiative. Fifth Third’s leadership on renewable energy has served as an example to other corporations through North America, and the firm has realized reputational benefits from its actions as well as direct environmental and economic upside.

“The payoff from setting a public goal was huge: We were the first Fortune 500 to contract for 100% solar power and we expect the project to come online in 2019.”

At Schneider Electric, our 21 Sustainability Impacts, and public commitments we have made to many third-party standards, including SBTI, RE100, CE100, EP100 and more, guide our decision-making and drive our progress. But we don’t stop there. Through our Energy & Sustainability Services business, we enable thousands of companies worldwide to overcome resource challenges and capture opportunities in energy and sustainability, by buying energy smarter, using energy more efficiently and driving sustainable growth. Contact us to learn more.