If you’ve worked in the electrical industry for any length of time, you have probably seen all kinds of creatures that have suffered a shocking demise. Mice, squirrels, snakes, birds and even some larger “pests” cause billions of dollars in damage and economic disruption in the US each year. Here is a list of the usual suspects and some noteworthy examples:

After getting swamped by a tsunami in March 2011, Fukushima Daiichi was hit with a 30-hour power outage in March 2013 that was suspected to be caused by a rat in the switchgear. The outage cut electricity to the cooling pools at three of four heavily damaged reactors as well as to a common pool. The spent fuel ponds contained highly radioactive nuclear fuel rods and the incident became another international PR disaster for the facility. All because of a rodent.

Mice and rats are attracted to the warmth and shelter provided by electrical equipment. They can chew on wires, build nests in machinery, and cause all sorts of damage. 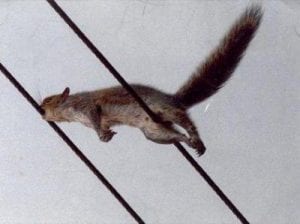 In 1987, a squirrel shut down the Nasdaq for 82 minutes. It happened a second time when another squirrel chewed into a power line in Trumbull, Connecticut, where the Nasdaq’s computer center is located, shutting down trading for 34 minutes.

Most of the time squirrels perform impressive high-wire acts on power lines without consequence. Occasionally they chew or touch the wrong thing and major outages can occur. 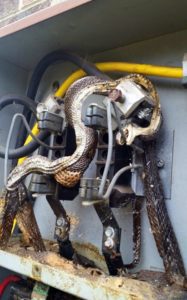 Workers for the electrical services department in Morganton, N.C., found the reptiles when they went to turn off power at a house that was scheduled to be demolished, according to a post on the Facebook page for the city government: “One snake slithered across two hot terminals and was electrocuted; The second snake was biting the first and received the jolt as well.”

Snakes can slither into small openings or thru conduit. Their presence can be a byproduct of rodent intrusion and a desire to hunt for food. 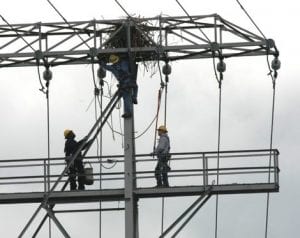 Birds are the most common cause of animal faults on both transmission systems and air-insulated substations. They can often be seen on power lines without incident, but when their wings or nests get too close to two different potentials at the same time, outages can occur.

In the photo shown, Seattle City Light workers remove an osprey bird nest near the Duwamish River that caused a short circuit.

Nesting birds also attract predators such as raccoons, snakes, and bears (yes, bears! We will get to that!). These predators can be a worse reliability problem than the birds themselves. 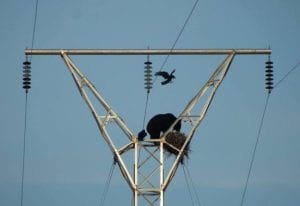 While not exactly a “usual suspect”, bear have been known to disrupt power service as well. This photo was taken in northeastern Alberta after a group of people watched this black bear climb a transmission tower. The bear was after eggs in a ravens nest. This one has a happy ending for the bear. He makes it back to the ground with a full stomach and a few peck marks.

Tip 2: Seal up!
Prevent access to the inside of your equipment. A mouse can enter an opening the width of your finger. Insects can get into even smaller spaces. Take a walk around your equipment and think like your pest. Use materials they cannot nibble thru to close all openings.

Tip 4: Insulate.
Wrapping or covering energized conductors can help prevent animal exposure to voltage. Outdoor equipment can be upgraded with silicone boots and tape. The inside of equipment can receive similar treatment to insulate bus bar and energized components.

Tip 5: Perform Electrical Preventive Maintenance (EPM). Work with a qualified electrical equipment expert to perform periodic inspection and service to your equipment. Consider this as a checkup for your equipment. The goal is to find issues early, correct them, and prevent failures by identifying root causes. Be on the lookout for droppings, nests, or other signs that your equipment is inhabited.

Tip 6: Modernize your equipment.
There are many options to upgrade your electrical equipment without the expense and hassle of replacing it. Whether you need to repair some rot on the outside of the enclosure or replace an obsolete circuit breaker, upgrading components can extend its useful life.

Learn how to enhance the reliability of your electrical switchgear!

5 Tips for Installing and Managing IT Equipment in Tight Spaces

Is your electrical equipment getting older? Tips to consider