If you’ve been following my blog series, you may have noticed a common thread: data drives effective decision-making. Whether you are acting on sustainability, energy efficiency, electrical resilience, safety, or any other aspect of improving operations, data is the feedstock of analytics. And the analytic tools that convert data into actionable insights are getting smarter.

In a previous post, I discussed how building information modeling (BIM) and LayoutFast by Schneider Electric help create an accurate ‘digital twin’ of a facility’s electrical system. This can help improve building design, save design and construction time and costs, and reduce risks. But the digital twin can also be used to help optimize power and energy management during the building operation and maintenance. 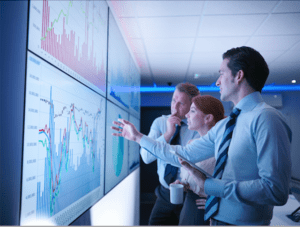 In this post, I’ll take this concept one step further by showing how electrical design and simulation technology uses the electrical digital twin to help make facilities safer, more reliable, efficient, and sustainable, from initial design through future changes during operation.

The digital twin as a single source of truth

Electrical design and simulation technology has been optimizing electrical system design and operation for many years. It has been widely adopted for large and critical power facilities like data centers, hospitals, university campuses, oil and gas installations, and manufacturing plants. But it is also increasingly being used in many commercial applications due to its wide range of benefits across the whole lifecycle of a building.

The newest solutions are designed to create an intelligent single-line diagram (iSLD), a digital model of the electrical distribution network. Going beyond the traditional, static, CAD-based electrical diagram, an iSLD includes information about the functionality of each device in the network and whole-system behavior. In this way, it enables modeling, visualization, simulation, and validation of an electrical system’s performance in terms of safety, reliability, and efficiency, while it is still in the design stage.

This highly detailed model becomes the electrical digital twin that integrates seamlessly with the complete BIM model. It can be carried through – from design to construction to operation – continuously updated and re-validated with any changes to the ‘as built’ electrical infrastructure. It acts as an active and accurate single source of truth that every stakeholder can depend on at every stage.

Note that design and simulation software, and the resulting iSLD, can be just as easily used for greenfield designs as it can for modeling and simulation for an existing electrical system for brownfield modernization or expansion projects. For existing installations, collected system data can assist in more accurate modeling.

The most powerful design and simulation solutions allow for analyzing a range of factors, from load flow and short circuit tests to power quality, motor starting, arc flash, protection coordination, transformer studies, and even the integration of renewable energy sources and energy storage. Every aspect of electrical system performance can be simulated and validated.

In turn, having the confidence during the design stage regarding what will happen when a facility is finally energized makes the facility’s construction, commissioning, and start-up go much faster. For example, you’ll avoid the situation where an inspector identifies a risk due to too much power, improper breaker sizing, insufficient redundancy, etc.

The iSLD digital twin is equally valuable during the facility’s operation, maintained as an accurate model of the real electrical infrastructure. For example, iSLD can check that the electrical system performance of the building is as expected based on the original design. But the benefits go much further.

The design and simulation software can integrate with a facility’s electrical power management system (EPMS) in a mutually beneficial way. The iSLD can be mapped across to ensure the system diagrams of the EPMS are accurate and up to date. At the same time, the measured data from the EPMS can be shared with the design and simulation application to maximize the accuracy of its analysis functions. Both will help when responding to an event like an outage when you depend on having accurate information to make it faster and easier to isolate a root cause.

The real power of the solution is revealed when doing predictive simulation and “what if” scenario planning. By harnessing the real-time EPMS data, the facility manager or the engineer can say, “Okay, if we move this circuit breaker over to this bus or expand the loads fed by that switchgear, what will happen? Do we have the capacity? Where will the trip happen? What will the arc flash be if we make this change?” This takes the guesswork out by simulating and validating any change or upgrade to accurately predict what will happen, enhancing decision-making.

Facilities typically need to complete an electrical system study every few years to comply with safety standards, such as the relevant U.S. NFPA standards. If the facility’s electrical engineering team needs to start from scratch every time, it can be very time-consuming and costly.

This is another benefit of the iSLD. As a complete, up-to-date electrical diagram and functional model of your electrical system, you won’t be beginning from nothing. And the design and simulation application will generally be used to run simulations regularly over the life of the building, making it simple to output a report at the required interval to share with the standards organization.

This all equates to less time, less money, and lower OPEX.

Design and simulation applications can also be used to support training. A simulated electrical system based on an accurate iSLD and real system data is a safe but realistic offline environment for new facility personnel to gain confidence.

Training on real-time scenarios based on the actual characteristics of the electrical infrastructure will help eliminate potential operator errors or misinterpretation of the system once these new employees are helping manage the facility. The simulator can help train with a sequence of operations over a multitude of pre-defined scenarios, including contingency planning.

The ETAP digital twin platform has been adopted for a wide variety of applications, for example, it is being used by two large industrial customers of Schneider Electric to integrate with the Schneider Electric arc flash protection solution, improve safety (e.g., validate before operate), optimize alarm management, reduce the costs of data collection and downtime, optimize CAPEX for electrical modernization projects, and digitize electrical studies to simplify compliance.

Electrical Distribution Safety and Reliability: Get it Right from the Start

The Digital Twin: Foundation for Fleet Socialization to Optimize Operations