Last blog, I wrote about our recent Digital Power Leadership Summit and three of the EcoXpert award winners. These awards are voted on by fellow Master-level EcoXpert partners from around the world, so they carry special meaning.

In this blog, I am featuring the top prize: Project of the Year, which was awarded to AZZO for their project at one of Australia’s leading banks. AZZO is an international company that specializes in energy monitoring, power controls and system audit. Their successes in a range of industries have helped their customers become leaders in energy management with operational control over their environmental footprints. 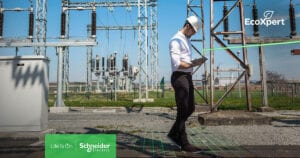 For this project, AZZO’s client was facing some difficult energy challenges at their headquarters building with over 130,000 sqm of commercial office space. First was the major energy load—the building had 42 chillers, 150 air conditioning units, and over 180 VSDs. These loads contributed to high levels of harmonic distortion. These power quality issues put a major strain on the onsite cogeneration units. What resulted were costly repairs, power outages, and penalties. Another vendor had been responsible for the installation of the original Active Harmonic Filters (AHF) units, which were meant to counteract the effects of harmonic distortion. Issues with that original design and installation were flawed and resulted in catastrophic failures and unsafe site evacuations that further impacted facility operations.

James DiLiberto, AZZO’s CEO and Principal Engineer, assessed the problem: “Harmonic filters weren’t the problem at all. It was bad design and lack of a monitoring solution… Dust and heat are the biggest risk to the successful operation of Active Harmonic Filters (AHFs).”

Faced with such difficult challenges, the bank decided it needed a comprehensive audit and overhaul of the building systems. Due to the complexity and high sensitivity of the site, infrastructure could not be put at risk during the operation. That’s where AZZO came in. AZZO took an outdated, poorly monitored, inefficient system, and replaced it with carefully designed EcoStruxure architecture.

The system overhaul began with a comprehensive power quality audit. In order to do this, AZZO needed a way to get high-quality data. At the time, the client had no PQ metering or any monitoring of their AHFs. AZZO deployed ten of its Portable Metering kits to support the audit, connected through 4G to a cloud-hosted and customized version of Power Monitoring Expert (PME). “This process allowed the customer to sit in the driver’s seat of the software they’ll be using in the future,” described James DiLiberto. Part of the power quality report included competitive analysis, pitting the Schneider Electric Accusine AHFs’ performance against three other market competitors.

“We had to be intimately involved with the customer and facility manager in order to build their trust. This approach really differentiated us from other companies.”

After the audit, AZZO implemented the full stack of EcoStruxure technology. They installed a total of 21 AccuSine PCSn and PCS+ units. The new AHFs are supported by the latest ION9000T and PM8000 power quality meters. AZZO also integrated AHF and power quality monitoring, connected devices with edge control, and coordinated it all under a suite of digital services.

“For the architecture in each area that ran chillers or mechanical service boards, PCS+ units were selected. On the main switchboards that feed common areas with neutral harmonics, banks of master-slaved PCSns were installed including an ION9000T at the transformer level catch any damaging high-speed transients.”

The new EcoStruxure architecture interfaces with the site BMS, including Power Operation, and Power Monitoring Expert, all on the same services network. This information is also connected though Power Advisor and AZZO’s Mission Control platform, both of which are used to remotely monitor the system by AZZO engineers through their digital services plan. The solution provides visual reports and alarms to alert users whenever anything goes wrong, providing the bank with a complete asset monitoring solution and peace of mind.

The result of all this effort? The bank’s headquarters is now a modern, cost-efficient, and safe building. Deployment was smooth, with no site or critical infrastructure downtime. No more need to worry about fires breaking out in overheated electrical rooms, or power outages caused by varied loads. Now, everything is monitored and supported in real time with EcoStruxure’s advanced technology stack, AZZO continues to work with the customer to now extend this solution to multiple other sites.. 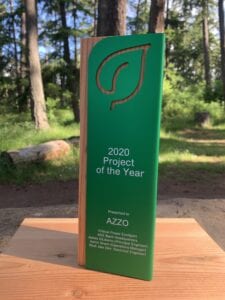 This project was an impressive success story and the award was certainly well deserved. Congratulations to AZZO, our other winners, and all the partners who made it through an incredibly challenging year. Given the quality and expertise of our global EcoXpert partners, I expect to see many more successes in the future! 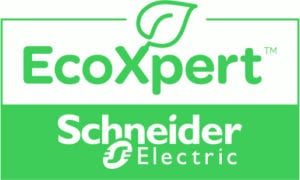 EcoXpert Awards 2021: And the Winners are…

Iconic Sports Venue and EcoXpert Win the Game of Efficiency