This two-post blog series looks at the drivers for electrical system cybersecurity, as well as how the IEC 62443 standard is helping simplify the definition of cybersecurity requirements.

The Internet-of-Things (IoT) is helping many businesses maintain their competitive edge, with 94% reporting they are already seeing a return on their IoT investments. More and more business infrastructures are becoming digitized, including electrical power distribution systems. Smart meters, circuit breakers, and other devices are growing in intelligence and connecting to powerful analytic applications. 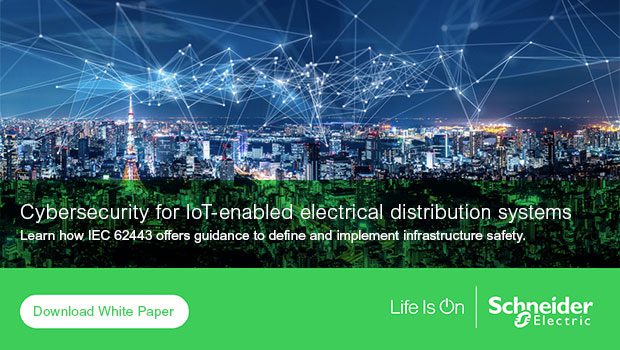 Whether hosted in the cloud or onsite at the ‘edge’ of a power distribution system, IoT-enabled applications are helping facility and finance teams reach deeper into their electrical systems to gain the insights needed to achieve a new range of operational benefits:

The digitization of electrical systems is an important part of improving and maintaining operational performance. However, like IT systems, operational technology (OT) is becoming more and more exposed to the risk of cyberattacks. Massive disruption and costs can be the result, as illustrated by the 2019 ransomware attack on Norsk Hydro, which has suffered over $40 million in losses.

It is imperative that all organizations develop a comprehensive cybersecurity management strategy for their facility electrical systems. The IEC 62443 provides a framework to simplify this process. Before we look closer at the standard, let’s look at the potential consequences of a cyberattack on an electrical infrastructure.

Impacts of an electrical system cyberattack

While a cyberattack on an IT system can risk the loss of data and intellectual property, an attack on an electrical system can have severe impacts on business operations and safety:

In terms of disruption, the level of financial loss will vary depending on the organization. Studies have shown a telecommunications operation can typically lose €30 thousand per minute, a financial trading floor can lose €6 million per hour, and an offshore oil platform can lose €30 million per day.

As the number of IoT connected devices grows, they have become a more attractive target for criminals. Kaspersky Labs reported that IoT devices were attacked with malware three times more in 2018 than they were in 2017.

In addition, the continuing convergence of IT and OT networks is increasing the attack surface for cyberattacks. A single insecurity in one network can lead to the breach of another. Examples including the 2017 attack on a university IT network that came through a botnet attack on vending machines, and the famous 2013 attack on retailer Target that came through the HVAC system and ultimately caused losses of $290 million.

We can easily imagine a reverse situation where an attack on an IT system might lead to an attack on a connected electrical system, causing a power failure or serious safety risks. 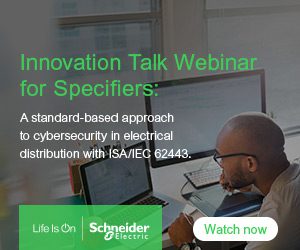 3 Cybersecurity Steps to Reduce Threats to your Electrical System