We are now well-entrenched in the Industry 4.0 era, or the 4th Industrial Revolution, and are seeing advancements in technology that will require increasingly greater computing power at the network edge, driving the need for industrial edge data centers.

A couple of examples that illustrate the sort of technology evolutions that are driving the need for edge data centers are GPS systems and robots. 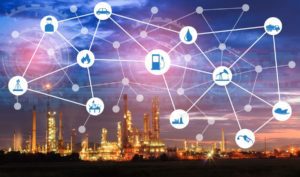 In their book “Human + Machine: Reimagining Work in the Age of AI,” authors Paul R. Daugherty and H. James Wilson note the first online maps were for the most part digital versions of paper maps.

Pretty soon GPS navigation devices changed the game, giving us directions to any destination in real time. Even that, they point out, was a fairly static process: you enter a destination and the GPS tells you how to get there from where you are.

But today we’ve got mobile applications such as Waze that take into account all sorts of other criteria when making navigation decisions – traffic, construction delays, accidents and the like. Such apps update in real-time based on the latest crowd-sourced information; Waze may well change its mind as to the quickest route to your destination if conditions along the way change while you’re en-route.

As you can imagine, providing all that real-time information requires a fair amount of compute power, much more so than putting a digital map on a website. And much of it needs to be localized, to collect data from thousands of phones employing Waze at any given time. (Right now, Waze tells me there’s more than 47,000 “Wazers” around me.) Relying on a central cloud-based data center would likely introduce too much latency for the app to function effectively, hence the need for a series of edge data centers.

Robots have gone through a similar transformation. Once they were used in industries such as auto manufacturing to perform simple, repetitive tasks once performed by (profoundly bored) humans. But that is rapidly changing, as a recent story on the Internet of Business website makes clear.

“A new wave of factory automation is underway and robots are entering new environments and creating new value for manufacturers. In part, this trend is driven by the availability of collaborative robots, or ‘cobots’, that are cheaper, more mobile and more flexible than their predecessors and that can work safely alongside human colleagues,” the story says.

Robots outfitted with artificial intelligence applications can work alongside humans, analyzing what the human is doing and helping with the task when necessary. Over time, the robot can help the human work in a more productive fashion.

It’s not just robots, of course. All kinds of AI applications are being applied to the factory floor, with profoundly positive results. A recent story in arstechnica sums it up nicely:

“Companies are seeing more precise, higher quality manufacturing with lowered operational costs; less downtime because of predictive maintenance and intelligence in the supply chain; and fewer injuries on factory floors because of more adaptable equipment. And outside of the factory, other industries could benefit from having a nervous system of sensors, analytics to process ‘lakes’ of data, and just-in-time responses to emergent issues—aviation, energy, logistics, and many other businesses that rely on reliable, predictable things could also get a boost.”

Here again, the real-time nature of these applications demands data be stored and analyzed as close as possible to where it’s produced. Latency is the enemy and a round-trip to a cloud data center and back likely won’t be tolerated.

So, it’s clear that as we get deeper into the Industry 4.0 era, we’re going to see increased demand for industrial edge data centers. Some will be relatively large facilities housed inside manufacturing plants, others small micro data centers located outdoors in remote environments – and everything in between.

Schneider Electric, of course, offers an array of micro data center solutions that are intended for edge environments, as well as numerous partnerships with IT vendors for compute, storage and networking components. Our recent merger with AVEVA adds powerful analytics software for commercial and industrial environments, such as for predictive analytics.

The Advantages of Micro Data Centers in Industrial Edge Computing