In the wake of Hurricane Michael in October, a single house was left standing tall on its pillars,  completely unscathed, amid what was otherwise rubble on Mexico Beach, Florida. It stands as a lesson in emergency preparedness for anyone responsible for business continuity for a commercial or industrial building. As storms around the globe are increasingly becoming more severe, businesses need to dust off their plans and reassess everything from protection of critical infrastructure to backup power plans. 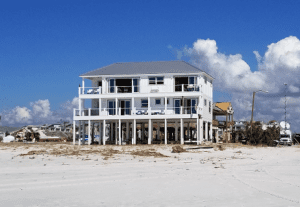 Going above and beyond for disaster preparedness

The home’s owners, Dr. Lebron Lackey, a radiologist from Cleveland, Tenn., and his uncle, Russell King, an attorney from Chattanooga, went above and beyond the norm to ensure their house could withstand the worst.

“Every speck of that house from below the sand to the top of the roof, we studied from the concept of making it hurricane-proof,” Dr. Lackey says in this Weather.com video. Among its features:

Such features put the cost of the house at 15% to 20% more than one conforming to conventional codes, but Dr. Lackey deemed it worth it.

“Comfort level” is a good way to put it. Those responsible for the well-being of commercial and industrial buildings must assess the level of risk they’re comfortable with in the face of extreme weather events that we are seeing more and more of. The issue warrants a risk assessment analysis with the business to determine which resources they can afford to be without for a time – and which they can’t. Depending on your risk tolerance, you may need to go well beyond the established norms for data and power protection , just as Dr. Lackey did.

Data Cave, a colocation and disaster recovery provider, certainly went the extra mile for a data center it built in Columbus, Indiana that opened in 2010. Built to withstand an EF5 tornado, its 43,000 square foot roof “features eight inches of concrete reinforced with a framework of half-inch rebar, which in turn is covered with a rubber matting and a layer of gravel,” according to DataCenter Knowledge. The roof weighs 4.5 million pounds, or as much as 1,258 average midsize cars. But given the company is in the colocation and disaster recovery business, going to such lengths likely made good business sense.

One resource that may prove helpful in making such decisions is the Sea, Lake and Overland Surges from Hurricanes (SLOSH) model, a computerized numerical model developed by the National Weather Service (NWS) to estimate storm surge heights. It takes into account atmospheric pressure, size, forward speed, and track data of hurricanes to create a model that predicts storm surge as applied to a specific location.

Such a model can help you determine various scenarios, including the worst-case, and plan for whichever makes the most sense given your tolerance for risk.

After a near-miss from Hurricane Sandy in 2012, officials in Boston used the SLOSH model to come up with a plan for protecting buildings and back-up power resources at Logan Airport from high waters – a significant concern given Logan is surrounded by water on three sides.

The plan defines the design flood elevation (DFE) for various buildings, which is the maximum level of water that a building has been designed to resist. In any building, important utilities, life safety systems and other critical equipment must be located above the DFE. The plan also included installation of temporary flood barriers, watertight doors and waterproof fencing to protect critical assets, as reported in this previous post.

Understanding the DFE of a building is important when deciding where to place important backup power equipment such as generators and uninterruptible power supplies (UPSs). They need to be high enough to be out of any danger of flooding, given they will be your first line of defense in keeping critical systems up and running in the event of a power outage. It’s the same concept that prompted Dr. Lackey to build his house on 40-foot pilings.

Other tips to ensuring your building can weather a storm include testing generators under load to ensure they will function as expected when needed. Such tests are required by law in some cases. In the U.S., for example, hospitals are required to follow National Fire Protection Association (NFPA) codes that require emergency power supply (EPS) systems be tested at least 12 times a year, every 20 to 40 days for a minimum of 30 minutes, as detailed in this previous post.

As many organizations have learned the hard way, it’s also important to have a good fuel supply on hand – 60 to 72 hours’ worth is a good rule of thumb. The fuel should be tested periodically to ensure it’s not contaminated, such as by water or algae. According to Exxon: “If you keep it clean, cool and dry, diesel fuel can be stored 6 months to 1 year without significant quality degradation. Storage for longer periods can be accomplished through use of periodic filtrations and addition of fuel stabilizers and biocides.” You can hire a company to “polish” the fuel in your tank for you.

You’ll also need a plan for restocking the supply should it run out before power is restored. Restocking was a significant issue in the wake of Hurricane Sandy due to road closures, as this post details.

Not everyone will be able to afford the kind of extreme measures that Dr. Lackey and his uncle took in building their Mexico Beach house. For them, it was worth it to ensure a certain “comfort level.”

Businesses need to similarly assess what risk level they’re comfortable with and plan accordingly. Facility managers should have input in that conversation and educate the business on what kind of protection is possible. To learn more, visit the Industrial Business Continuity web site, which is packed with info on how to keep your business up and running in the event of a power outage.

It’s All About Business Continuity: How Electricians Can Offer BackUp Power Protection to Commercial Customers