Even power connections that are perfectly installed tend to loosen over time; avoiding this can head off serious problems

Our previous post in this series discussed how important it is for installers to use the correct torque when tightening power connections, and some of the reasons these connections are prone to loosening over time. We also described technology that incorporates spring elements to maintain the integrity of the connection over the long term. In this post, we explain why keeping the power connection tight is so important, and what happens without this type of protection.

Elements of a good connection

Making a good connection at the contactor or circuit breaker, where electrical power is being supplied, begins with the selection of the proper type and size of cable. Preparing the cable includes removing the specified amount of insulation—not too much, but not too little, either—as well as twisting the cable end and sometimes adding surface treatment as appropriate, as illustrated in image 1. 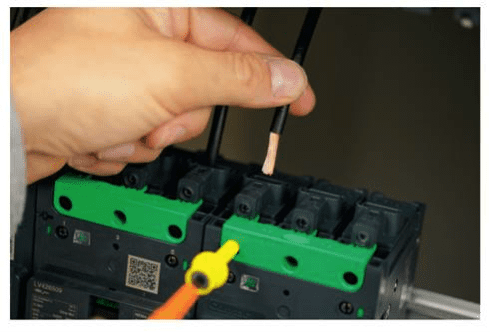 The idea behind this careful preparation of the cable end is to ensure that a tight mechanical connection can be made, which is one advantage of screwed connections. Although spring connections offer convenience for the installer, threaded connections provide a means to ensure the specified connection pressure is attained. Such a tight connection serves two purposes: It helps make the electrical resistance as low as possible at the connection and it prevents the cable from being pulled out of the connection, such as during a short circuit.

As noted in our previous post, screw connections have a specified installation torque to ensure the proper mechanical clamping force is achieved. Breakaway bits are available to make it easy to get that part right. 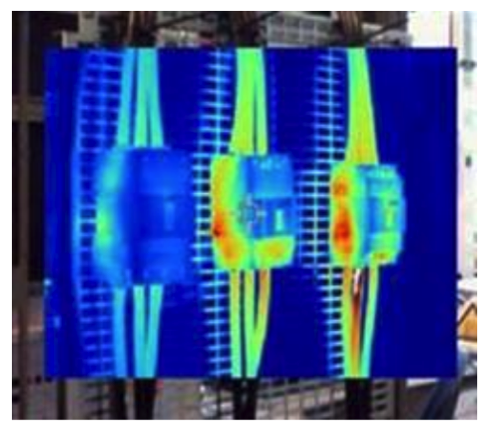 When overheating does occur and is discovered early on, it can serve as a warning that something in the connection is amiss and should be investigated. Frequently, the problem can be remedied simply by retorquing the connection. However, because the temperature of a connection is directly related to the current passing through the connection at the time of testing, testing and observation must be done when the circuit has been operating at its normal operating level for some time. Even then, the current may not be high enough to generate overheating.

The bottom line is that overheating at connection points is indicative of a bad situation. One way to avoid the loosening that leads to overheating is to buy only high-quality products assembled from high-quality components, including the cable termination hardware.

Through its spring-loaded pressure maintenance capabilities, Schneider Electric’s EverLink technology ensures that full contact is maintained in power connections even as material creep occurs. To learn more about this technology, click here.

Our next blog post in this series will further discuss ways to check for local overheating, and what to do about it.

Increasing the Short-circuit Current in a Shore Connection System

Shore connection : how to make a ship ready?