We all know how potentially devastating electrical fires can be in any kind of building. Not only is human life put at risk, but also the resulting property damage and business disruption can be extremely costly. Take, for example, the fire caused by a switchgear failure at Atlanta’s Hartsfield Airport in 2017, which caused US$50 million in losses and 1,400 cancelled flights for Delta Airlines.

Electrical fires account for 22 percent of workplace fires and are one of the top causes of fires in hospitals (after cooking-related incidents). While the electrical fires are often due to defects in medium or low voltage system wiring, switches, and motors, one major insurance carrier estimates approximately 25 percent of all major electrical failures are due to loose or faulty connections. 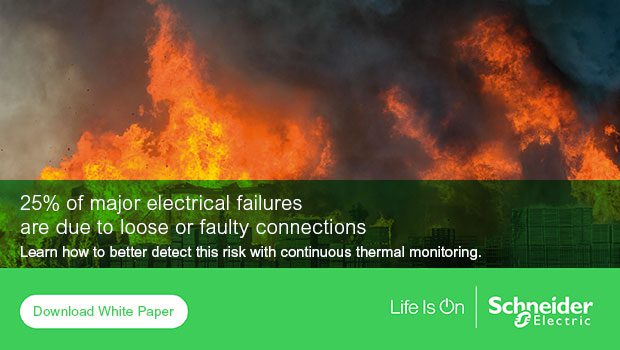 This is why many regulatory bodies require annual thermal surveys to reduce the risks of fire due to faulty connections. Up to now, infrared (IR) thermography has been the method used for these surveys. The method can be very effective when done in compliance with regulations. In this two-post series we’ll have a look at how electrical fires happen and how emerging continuous thermal monitoring solutions now offer a safer and more comprehensive way to detect thermal risks.

Faulty electrical connections are a major cause of failure in MV and LV installations. Improper tightening torque, constant vibrations, corrosion, or excessive pressure or friction can all cause cable, busbar, and circuit breaker connections to deteriorate. Frequent temperature cycling and on/off switching can contribute further to loosening.

Service malpractices can also cause problems. Whether during cable insulation testing or maintenance on circuit breakers, any errors in inspection, retightening, or alignment can result in an unreliable connection point.

For such connections, increasing contact resistance accelerates deterioration which, in turn, causes an increase in temperature. This causes more deterioration, more resistance, and eventual thermal runaway causing a fire, flash over, or explosion. This is why it’s so important to catch abnormal busbar temperature rises early enough to prevent fires.

The most common approach for thermal inspections is using IR thermography, using a thermal camera to inspect the highest-risk areas of electrical equipment. This is usually done at regular intervals, for example every 12 months. Though the technology and process are effective when performed within these parameters, the method has a few potential weaknesses.

Next, for testing of live equipment, an IR window is often installed in a switchgear door to enable camera access, or the operator might need to open a door for access to LV equipment. Limited space and visibility of contact points can also make camera positioning a challenge. These conditions can raise safety concerns regarding the risk of exposure to arc flash.

Finally, IR thermography surveys can be costly, though the return-on-investment is high. It’s been estimated that IR inspections followed by timely repairs can deliver a 4:1 payback in terms of avoiding equipment failures.

In my next post we’ll have a look at how new thermal monitoring systems deliver a number of maintenance and operational advantages over IR thermography, with an even greater ROI.