Companies and organization like to be noticed when they do something right. But, nobody wants to gain attention because something went wrong. An example was a government-backed show in India in February 2016. It was supposed to highlight cultural and technical progress, but instead experienced a massive fire arising from a defective electrical circuit. The result was a lengthy investigation and the type of publicity that no one wants. 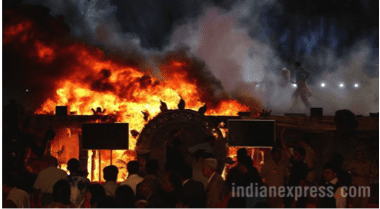 2016 “Make In India” week event in Mumbai.Photo courtesy of IndianExpress.com

Everybody wants to avoid that outcome – or worse ones involving loss of life.

For the final user, the electrical engineer consultant, the original manufacturer and the panel builder of switchboards, electrical panels, and power distribution, a good first step to minimize risks and achieve a happier ending involves following the guidelines in the IEC 61439-1/2 “Low-voltage switchgear and control gear assemblies.” That leads to better electrical panels, and, as a result, an electrical safety and power availability environment.

To see why there is a new standard and why it should be followed, let me give you some examples and statistics:

The root cause can be an improperly built panel. Now, such panels work in the beginning and may do so for years. But, deep inside them they have problems – perhaps from a small default as a 5mm clearance between two conductors instead of the IEC 61439 prescribed at 8mm. A narrower gap means that the panel may short circuit when a nearby lightning strike creates an overvoltage situation. In usage, many types of over-voltages can occur because switching equipment connected on the network can create an impact on the panel.

This may not be an issue for a long time. But someday, the short circuit can happen, with a loss of life and money the result. When the cause of the calamity is uncovered, questions will be asked, such as “Why was the clearance reduced from 8 to 5?” Answering may be difficult, especially given that whoever designed and built the panel may be long gone and there may be little documentation detailing why the choice was made. But, that may not prevent assigning blame to the end user or the designer for the catastrophe.

Following IEC 61439 prevents such problems, which as I detailed in this post is why the new standard was created. IEC 61439 series includes a general rules document (IEC61439-1) that applies to every type of ASSEMBLIES. It has extensions for various assemblies (IEC 61439-3 up to 61439-7 ) for specific applications as well as for busbar trunking systems.

This new standard improves upon older standards in several ways. For instance, it clarifies the roles of switchboard system manufacturers and panel builders. That lessens confusion.

It also institutes third party certification. So, designers and end users now have solutions that have been verified by both the manufacturer and another, independent organization.

What’s more, IEC 61439 consolidates the verification scheme so that there are only verified assemblies, with 10 items tested. Older standards allowed for partial testing, which lead to abuse of the system. Partial testing is cheaper than full testing, and the partial nature of the tests could be buried in hard-to-read fine print.

The need for IEC 61439 can be seen in electrical assemblies worldwide. Four out of five – that’s 80%! – do not comply with the standard, with deviations both large and small. One result is a greater likelihood of fire or explosion. Another potential outcome is lost power availability.

Countries around the world are starting to recognize the importance of following IEC 61439. The BIS, bureau of India Standards,  for example, may soon adopt IEC 61439 as a national standard, in part to stop fire accidents like those mentioned. By following IEC 61439, specifiers and end users will be implementing design and assembly rules that should keep panels functioning for many decades. And a better built panel, one that has been verified to adhere to the standard, will be good for everybody – particularly those who don’t want to make the news for the wrong reasons.

In the next post of this series, I’ll discuss temperature rise-related derating of protection devices. It is critical to do this correctly.

To help you implement the standard, be sure to select the right partner. For more information, please click here.

IEC 61439, More than just an upgrade, a whole new approach