The concept of a circular economy is one of the most important new ideas to be developed in recent years, and those of us in the electrical distribution and controls industry have a great opportunity – some might say even an obligation – to contribute significantly to the change.

Unlike a linear economy based on a “take, make, dispose” model, which is predominant throughout the industrialized world and fast-moving-consumer-goods (FMCG) in particular, the circular economy model aims at keeping resources in use as long as possible and at minimizing or eliminating waste by focusing on products that are “made to last long and to be made again.”

On the manufacturing side, that means designing products that lend themselves to being reused, repaired, upgraded, retrofitted, and ultimately dismantled for recycling. Having this type of product available allows contractors and electricians to choose wisely for long-term serviceability, which then allows end-users to proactively participate in the circular economy. 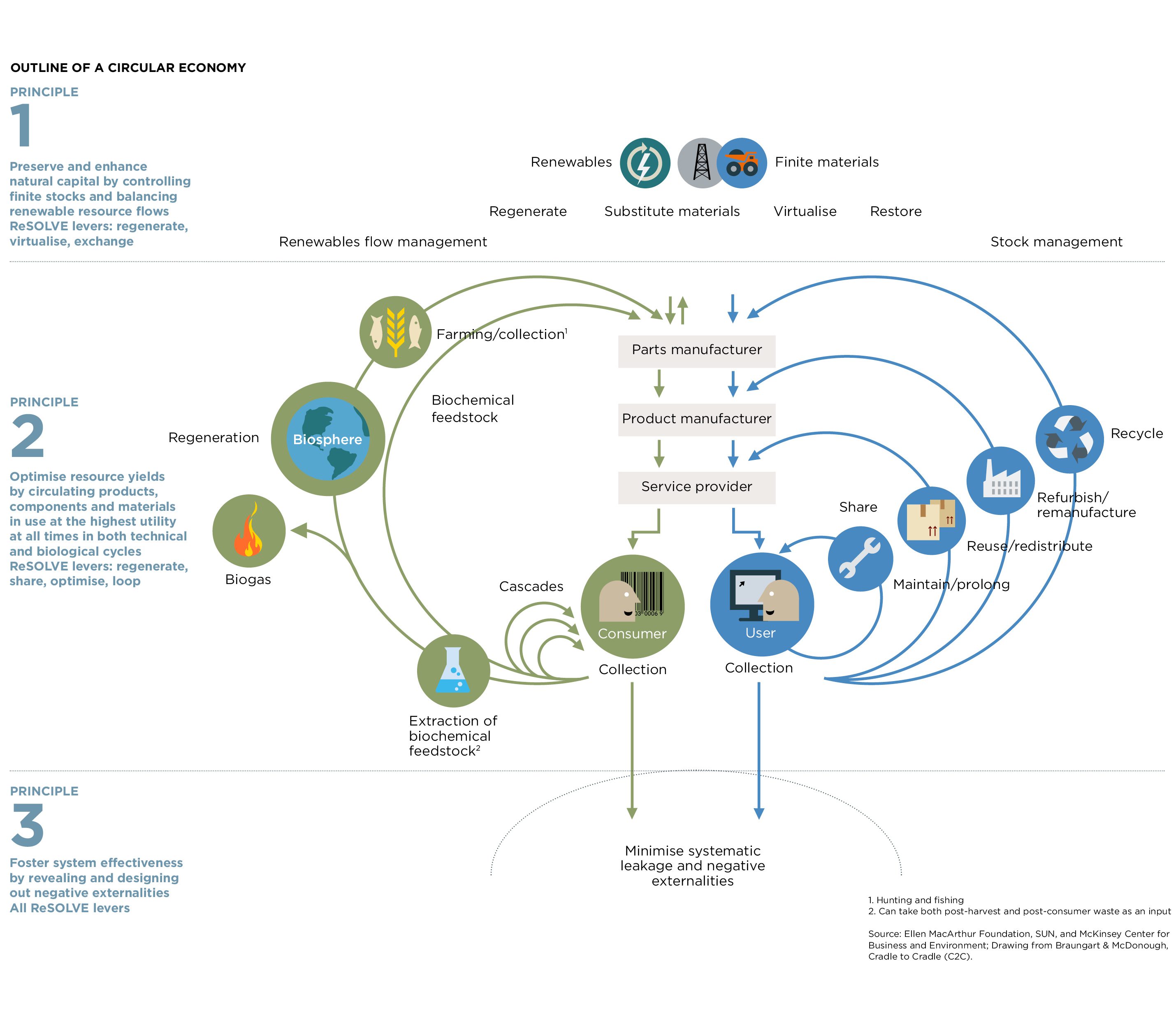 Although the basic ideas underlying the circular economy are simple and straightforward, only recently have they been articulated as a unified concept and an achievable goal. The idea began to come into focus for Ellen MacArthur in 2005 as she was en route to setting a new world record for the fastest solo nonstop sailing trip around the world.

In her pursuit of speed, MacArthur had packed an absolute minimum of resources. She later reflected on the deeper significance of that condition in a description that appears on the Ellen MacArthur Foundation website.

“At sea, what you have is all you have,” MacArthur said. “Stopping en route to restock is not an option and careful resource management can be a matter of life or death – running out of energy to power the autopilot means you can be upside down in seconds.” Her boat was her world, she said, and she was constantly aware of its limited supplies.

Long-distance solo sailing gives one plenty of time for serious contemplation, and for MacArthur, who was then just 28 years old, the experience of 70 plus days at sea, completely on her own and self-reliant, resulted in a fundamental realization.

“No experience in my life could have given me a better understanding of the definition of the word finite,” MacArthur explained in a TED talk given in June 2015. “What we have out there is all we have. There is no more.”

MacArthur continued to ponder the deeper implications of what that meant for the human race, and “suddenly I connected the dots,” she told the TED audience. “Our global economy is no different. It’s entirely dependent on finite materials we only have once in the history of humanity.”

That realization ultimately, in 2010, gave birth to the Ellen MacArthur Foundation. The organization is dedicated to accelerating the transition from a linear economy, where raw materials are used then discarded, to a circular economy that is “restorative and regenerative by design.” The approach takes full advantage of every opportunity to repair, reuse, refurbish, remanufacture, and recycle technical (i.e., non-biological) materials in a way that eliminates waste.

At Schneider Electric we have long been committed to being good environmental stewards, and in 2015 we were accepted as a member of the Ellen MacArthur Foundation’s Circular Economy 100 program. Launched to foster industry’s collective advancement toward a circular economy, the CE100 program brings together corporations, governments, academic institutions, small- and medium-sized businesses and others in pre-competitive opportunities for collaboration and exchanging ideas and experiences.

As a CE100 member, we are able to listen and learn from others as our senior managers participate in the CE100 Acceleration Workshops held twice each year. We also share with others what Schneider Electric is doing to transition its operations to be fully integrated into the circular economy model.

We are proud to be recognized as a global specialist in energy management and automation, and to be providing our customers with best in class technologies and solutions, enabling them to achieve more with less energy and resources. We are also proud of our continuing efforts to move the world’s economy toward being more circular, and “restorative by intention,” and away from being strictly consumptive.

Upcoming posts in this series will go into detail about how we are helping electrical contractors reduce their carbon emissions and make their businesses sustainable, in concert with the vision of a circular economy articulated by the Ellen MacArthur Foundation.

Circular Economy: Good for the Planet, Good for Power Distribution