As I described in my post “Understanding the Sources of Power-Quality Disturbances,” the density of electrical equipment in today’s industrial facilities creates numerous opportunities for power-quality problems to occur. That post focused on a number of potential sources for such disruptive occurrences. In this post, I’ll be covering the impact various types of power-quality events can have on specific types of equipment.

As figure 1 illustrates, almost all equipment within an industrial facility is susceptible to power-quality disturbances, and low power factor also has its victims within a manufacturing plant. 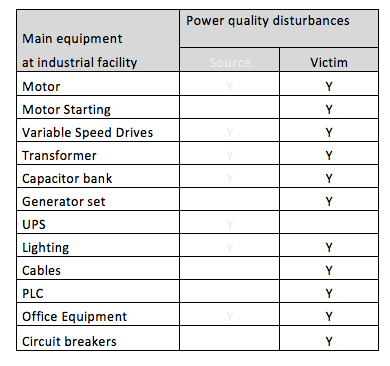 Motors are a prime example of the ways electrical equipment can be both a source and a victim of power-quality disruptions in an industrial facility. Large motors can cause voltage sags in local and adjacent areas when they are started, individually or in groups. And induction motors can have a negative impact on a facility’s power factor, due to their need for reactive energy to create a magnetic field. However, these devices also can be negatively affected by such disturbances in a number of ways, with results that can include decreased efficiency, reduced lifespan and even complete failure. The most damaging disturbances for motors include:

But motors are only one of many types of equipment that can suffer performance problems, damage and shortened lifespans as a result of varying power-quality and power-factor disturbances. Following are examples of devices throughout an industrial facility that can suffer as a result of voltage unbalance, harmonics, frequency issues and other power irregularities.

These efficiency-aiding devices can suffer nuisance tripping due to voltage sags and transients.

Critical to power distribution within an industrial facility, this equipment can fall victim to:

High harmonic levels can cause excessive heating and failure in these devices.

When supplying non-linear loads, generators must be derated, due to losses caused by harmonic currents. Similarly, low or leading power factor may lead to oversizing (or overloading) a generator.

Harmonics generate heating in cables, and high harmonic levels can lead to the need to oversize the neutral conductor in cables.

PLCs are very sensitive to voltage sags. The most sensitive units have been shown to shut down during voltage sags of 78% to 85% of nominal current and as short as two cycles

Office equipment, including computers, photocopiers and other devices, can be very sensitive to voltage sags, swells and short interruptions.

Harmonics can lead to nuisance tripping in circuit breakers.

The degree to which any of these devices are at risk can depend in where within a facility’s distribution system they are being operated. Understanding the potential impact placement might have is critical to an industrial plant’s performance. Measurement and analysis before and after installation are key factors in protecting equipment from internal power-quality problems. You can read more about power-quality measurement in my previous post, “Power Quality: Measuring to Manage.” And, additionally, I’ve also written about measures you can take when identified problems need correcting, in “Power Quality Improvements for Today – And Tomorrow.”

Schneider Electric offers a number of products and services that can aid in measurement and analysis. For example, with our PM8000 power-quality meters, disturbances can be detected, measured and recorded. These devices feature Disturbance Direction Detection, which can help localize a problem’s root source. Our Power Quality Advisor can simplify analysis with its green-yellow-red indicators. Using it, facility personnel can evaluate a problem’s impact on manufacturing processes and equipment and estimate the cost of poor power quality.

Jazz and the art of power quality

LED Lighting and the Pitfalls of Power Quality Issues