This is the fourth post in a series on achieving selective coordination – previous posts have provided an introduction to the topic, looked at its implementation in healthcare environments and considered some of the challenges of meeting related National Electrical Code® (NEC®) requirements. In this post, I’m focusing on molded-case circuit breakers (MCCBs), a common tool for overcurrent protection, and some of the principles designers and specifiers need to understand about how these devices operate in selectively coordinated systems.

In the United States, MCCBs are listed to Underwriters Laboratories (R) (UL (R)) Standard 489, “Molded-Case Circuit Breakers, Molded-Case Switches, and Circuit-Breaker Enclosures.” This standard also applies to the smaller MCCBs often referred to as miniature circuit breakers (MCBs) and larger insulated-case circuit breakers (ICCBs). MCCBs have one or more instantaneous trip functions. Understanding what these functions are and how they work is critical, because the level of selective coordination achievable depends on whether or not a particular fault current will cause the circuit breaker to trip. These possible trip functions include:

So achieving the highest level of selective coordination would require a circuit breaker to have high electrodynamic withstand, along with a trip system that can sense a high level of current – both of these are necessary. Additionally, an instantaneous trip function with a short time delay, perhaps a half cycle, would allow time for a downstream circuit breaker to clear the fault on its own.

Understanding TCCs – and their limitations

TCCs are a valuable tool for designing selectively coordinated systems, but they have some limitations and shouldn’t be the sole source of an engineer’s specification decisions. Both circuit breaker and fuse TCCs are developed by testing the device, itself, in isolation. This testing yields results that can be used to determine coordination in the overload region of the TCC of a circuit breaker – the inverse time part of the curve – and in the non-current limiting region of fuses (see Figure 1). However, this testing is inadequate to determine selective coordination in the instantaneous region of a the TCC of a circuit breaker, or in the current-limiting region of the TCC of a fuse. 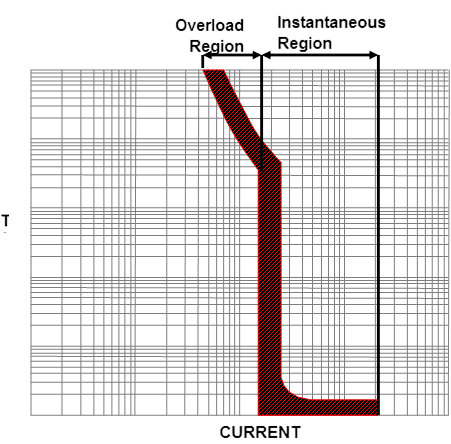 Fuse manufacturers solved this problem long ago by publishing ratio tables, and these tables must be used to determine selective coordination for fuses. Similarly, circuit breaker manufacturers publish short circuit selective coordination tables that, combined with TCCs, can be used to design selectively coordinated systems. The circuit breaker tables can be helpful when TCCs in the instantaneous region overlap at a point below the level of available downstream fault current. Manufacturers publish this data in varying forms, including:

My next post will go further into design guidelines for developing selectively coordinated systems with MCCBs.  You can also visit the Schneider Electric Consulting Engineer portal for additional online resources and direct connection with experts, via phone, email and web chat.