Welcome to the third in a series of posts focused on National Electrical Code® (NEC®) requirements for selective coordination. In my previous post, I covered some of the specifics important to engineers and designers working on health-care projects. This post is a bit more general, and covers other types of installations in which emergency power supply systems (EPSS) are being employed. As you’ll read, assuring your designs comply with these requirements requires a clear understanding of both which edition is in effect in any particular project’s jurisdiction, and how the authorities having jurisdiction (AHJs) are interpreting the requirements of that edition.

The reason for this need for clarity is the fact that the NEC requirements in Article 700 (Emergency Power Systems) and Article 701 (Legally Required Power Systems) have evolved over the course of the last several revision cycles. These articles apply to systems intended to supply power “when the normal electrical supply or system is interrupted.” Such language would seem to indicate that the selective coordination requirements in those articles only apply when the system is fed from an alternate, backup-power source. Figure 1, which is included in Appendix B.1 of the National Fire Protection Association’s NFPA Standard 110, “Standard for Standby and Emergency Power Systems,” identifies how such equipment would physically relate to the rest of an electrical system and seems to support this interpretation.

However, diving into the details of Articles 700 and 701, one finds their requirements state that “overcurrent devices shall be selectively coordinated with all supply side overcurrent protective devices”. So, what, exactly, does “all” really mean in this context? This question has arisen in the last two NEC revision cycles.

When these selective coordination requirements were first initiated in the 2005 NEC, “all” was interpreted by some to include all devices upstream of the transfer switches connecting the EPSS loads to both normal (grid-supplied) and alternate power sources. A statement by Code Making Panel 13 (CMP 13) for the 2011 cycle, however, indicated that requirements for “normal” system devices were actually outside the scope of Article 700. 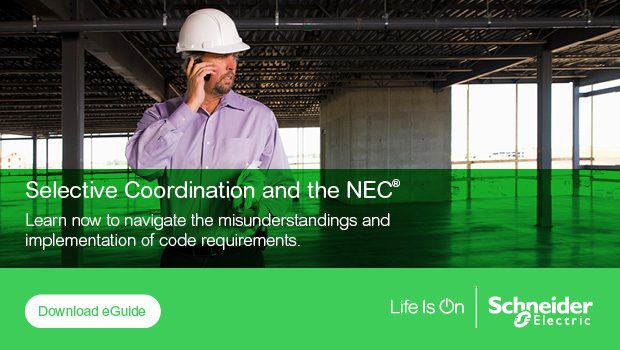 Obviously, this change could have a significant impact on how an AHJ might view proposed electrical designs, so it’s critical that engineers understand which NEC edition is in effect in the jurisdiction in which any given project is located. Additionally, it’s important to know what local amendments to NEC selective coordination requirements might be in effect. Consider how the following major jurisdictions have enacted their own guidelines:

Additionally, designers working on projects requiring EPSS installation also should be clear on the relationship between the NEC and two other National Fire Protection Association (NFPA) standards: NFPA 99, “Health Care Facilities Code,” and NFPA 110, “Standard for Emergency and Standby Power Systems. There is no conflict between the NEC and these two standards – as the NFPA Standards Council has stated, NFPA 99 and 110 outline performance requirements of their respective systems, while the NEC covers installation requirements of those systems.

My next post will begin a discussion of molded-case circuit breakers, their functions and related design guidelines. Also, should you have questions regarding selective coordination in any current or future project, please visit Schneider Electric’s dedicated consulting engineer portal for a wide range of resources, including access to one-on-one support from expert staff engineers.

Selective Coordination and the NEC: Defining Terms and Understanding Updates