Solar-photovoltaic (PV) electricity generation has grown by leaps and bounds over just the last half-decade, and offers tremendous promise for meeting both growing energy demands and the need to reduce generation-related greenhouse-gas emissions. However, as the number of PV arrays – particularly larger utility-scale operations – increases, so does the need to ensure system designers address the hazards ground faults can create. These arrays are intended to function for decades under harsh operating conditions, so incorporating appropriate ground-fault protection today can help prevent the damage and downtime related fires could cause long into the future.

The global growth curve of PV installations is truly remarkable – cumulative PV capacity reached 227 gigawatts (GW) by the end of 2015, compared to only 40 GW in 2010, according to the International Energy Agency’s Photovoltaic Power Systems Program. PV systems produced 1.3 percent of the world’s electricity in 2015, and they are anticipated to meet 16 percent of global electricity demand by 2050. 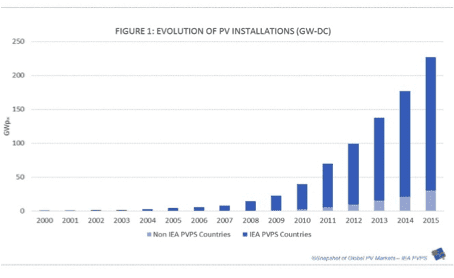 The utility-scale sector represents a particularly robust share of this anticipated market growth, with the PV Market Alliance expecting growth in such projects of approximately 20 percent during 2016 and 2017, with annual installations reaching 100 GW of added capacity by 2020. With such rapid expansion, safety considerations can sometimes be overlooked, and this can include insufficient attention to ground-fault protection on the direct-current (DC) side of the installation. In this post, I’ll be covering several methods for addressing this concern.

While rare, utility-scale PV installations (just as any electrical installation) can pose fire risks. A reason for this can be a ground fault, such as an accidental contact between an energized conductor and ground or equipment/array frame. Ground faults are usually caused by damage to conductor insulation – the consequence of the resulting fault currents lead to conductor overheating and potential fire. This was the case in the Bakersfield fire, California in 2009 and the Mount Holly fire, North Carolina in April 2011, both caused by undetected ground faults at the DC side. Incontestably, DC grounding choice and the use of specific equipment to detect ground faults is vitally important.

Understanding where and how to provide ground-fault protection begins with an understanding of a utility-scale PV installation’s basic architecture. As shown in Figure 2, below, these systems – generally above 1 megawatt (MW) in production capacity – typically incorporate the following:

While the term “grounding” can sometimes refer to protecting exposed conductive array elements not energized during normal operating conditions (such as frames and other metallic materials that could be energized during a lightning strike), I’m focused, here, on grounding for live conductors. This is also called “functional” grounding, and system designers have three options for providing this protection, as shown below:

No grounding connection:
There is no ground reference – the voltages float in relation to the ground potential. This system is also called ungrounded, or floating.

Grounded (hard-wire) connection: One of the polarity terminals (positive or negative) is connected to the earth. Its potential is equal to 0V. This system is also called grounded.

High impedance connection: One of the polarity terminals (positive or negative) is connected to the earth through a high impedance.

The designs, above, each come with recommendations for devices necessary to detect ground faults. Simplified ungrounded PV systems, for example, require the installation of an insulation monitoring device (IMD) at the inverter connection to monitor impedence with respect to the ground. If measured resistance falls below a given threshold, the IMD will send a visual/audible alarm (although inverter operation will continue). Operators can decide to shut down the inverter to avoid the risk of a second fault.

To address this fire risk, International Electrotechnical Commission (IEC) Standard 62109, “Safety of power converters for use in photovoltaic power systems,” requires the ground connection of the inverter to be opened at night (when panels aren’t generating electricity), and that an IMD be installed to detect any existing insulation faults. 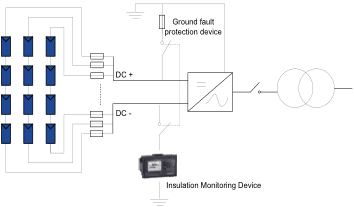 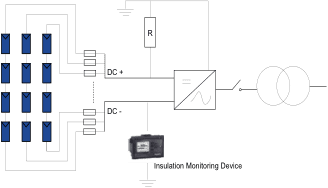 As these three examples indicate, IMDs are critical components in any utility-scale PV array’s ground-fault detection. You can read more about how to specify and configure these devices in the post “Specifying Insulation Monitoring Devices for Utility-Scale Solar Safety,” by my colleague Madleen Laclef.  Click to learn more about Schneider Electric’s IMD products and Conext SmartGen  and solar inverter solutions.