In a previous blog post I walked through a number of ways that a pre-assembled, integrated electrical panelboard can deliver significant return on investment when installed in a new or refurbished building. One of the areas touched on was that a pre-integrated panel will have a smaller footprint than a “stick built” panel that’s assembled by an electrician on site.

I thought that point deserved a bit of a deeper dive, to explain why it is that a factory assembled, integrated panel can save so much space – because the savings can be significant. As mentioned in the previous post, I’ve seen examples such as a hospital that saved so much space in its electrical rooms that it was able to put an extra patient room on each floor. Just think about the ROI that will deliver over the life of the building.

So why do integrated panels require so much less space than stick-built? Simply put, it’s because we can construct panels in the factory in a way that would not be allowed in the field because we can thoroughly test the finished product to make sure it meets all relevant fire and safety standards.

It has to be configured that way for a couple of reasons. First, you need to dissipate the considerable heat the transformer generates in order to comply with National Electrical Code (NEC) requirements. Second, you’ve got to comply with clearances required for panelboards. 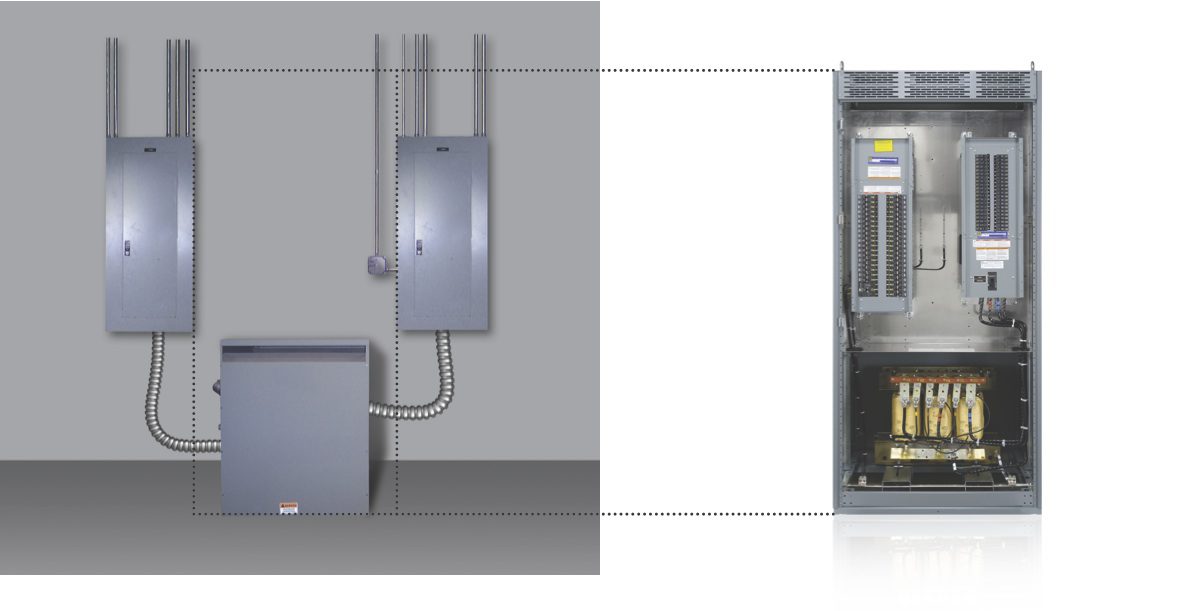 If we were to build an integrated panel with the same components, we’d be able to stack the two panelboards above the transformer, as in the right-hand photo above. Now, I know what you’re thinking. “But what about the clearance and heat dissipation issues?”

Here’s where the advantages of assembling in the factory come into play. We start with a UL-listed, dead front switchboard enclosure. We design the enclosure to evacuate the heat from the transformer such that the temperature inside the enclosure is well within the limits the panelboard components can tolerate without suffering deterioration.

Each unit then undergoes functional tests and dielectric tests in the factory.

That’s the key differentiator with respect to factory built integrated panels vs. stick built. In theory, an electrician could buy all the required parts and build a similar panel on site, but they won’t have that UL oversight. And without that, the NEC won’t approve the panel.

All it takes is a little advance planning to gain the significant benefits that integrated panels bring, typically about 20 working days, or a month in calendar time. It’s a small price to pay to gain all that valuable real estate in your electrical room, not to mention all the other benefits mentioned in my last post.