If anyone knows about the importance of having reliable power equipment, it’d be a guy like Ed Potter, a 30-year former employee of IBM, a licensed pilot, and a resident of Tornado Alley in Texas. 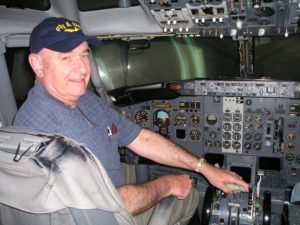 Potter, a native of New York who moved down to the northern part of the Lone Star State in the 1980s, has been relying on products made by American Power Conversion (APC) for almost as long. And, he says, for good reason.

“I’ve had nothing but good luck with APC,” Potter says. “The equipment is reliable and has saved me more than once.”

Potter began working for IBM’s computer department in the mid-1960s.

“That got me started on something I really enjoy,” he says. By the end of his three-decade career at Big Blue, Potter was maintaining the data and telephone systems “for all of the IBM U.S. branch offices,” he says.

Potter became familiar with APC products through his job during the 1990s, but it’s his experience as a personal user of APC hardware that has made him not just a satisfied customer, but an APC proselytizer.

“I live between Dallas and Fort Worth, in an area called Mid-Cities, and there’s always a lot of construction and problems with power lines here,” he says. “We have a lot of power outages, much more so than in New York. And the electrical surges are tremendous. That’s one of the main reasons I started using APC products regularly.”

Among the first APC products Potter owned were a pair of PNote AC75 auto and air inverters, which convert 12-volt DC to 120 volts AC. “One for my car and one for my daughter’s car,” he says. Both, he says, still are in use.

To protect against the power surges endemic to his part of the country, Potter owns a PNote Pro 3, which he describes as “more of a surge arrestor for your laptop when it’s plugged in.”

For his home entertainment center, Potter says he relies on an H15 Power Conditioner, which guards high-performance audio and video devices against power surges, spikes and lightning.

“I use it to protect all of my equipment, including a flat screen TV and a Blu-ray player,” he says. “It keeps power voltage at a steady level, something we could use here in Texas.”

For outages, Potter can rely on his Back-UPS RS1500 uninterruptable power supply, which he says he obtained through APC’s trade-up program that allows customers to exchange older hardware for more modern equipment.

Potter isn’t shy about personally recommending APC products. Not only does his daughter use the PNote AC75 car inverter, “she has the same APC equipment as mine in her home.”

He’s also spreading the word beyond his family.

“When I retired from IBM, I did some consulting work and began recommending APC to my neighbors and friends who have PCs,” he says. I’ve had so much good luck with APC. That’s why I recommend their products.”

APC Back-UPS Made My Life Easier

APC Back-UPS Made my Life Easier