When you install a surge protector, the golden rule to bear in mind for cable lengths and clearance distances is “the shorter, the better”

When you install a surge arrestor, the single most critical parameter is cable length – to the mains network and to the piece of equipment it is supposed to protect.

Surge arresters’ cable lengths are like good jokes. The shorter, the better. Unlike jokes, however, lengths are no laughing matter. The reason? A cable that’s too long can destroy a load. Under fast rise time conditions, inductance increases and causes high transient voltages to build up in long cables.

Indeed, the shorter the connection, the more effective the protection. More than any other parameter cable length determines a surge arrester’s ability to dissipate overvoltage up to a given value.

A rule of thumb for the length of a cable between the surge arrestor and the mains network is the so-called “50 centimetre rule”. Similarly, the cable connecting the arrestor to a piece of equipment should be no longer than 10 metres.

Anything above that and the load is destroyed.

Let’s take, for example, a surge arrestor with a cable connection to earth that is total of 1m long. If a 10kA lightning impulse current runs through it for 10 microseconds, the potential difference between its two ends is 1000 V. 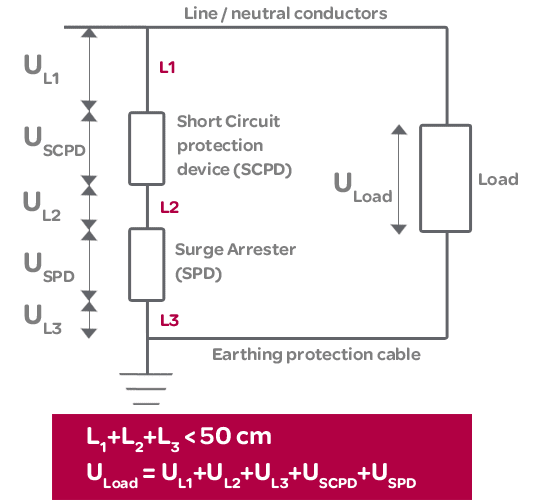 However, the 1000 V come on top of the 1500 V maximum potential difference of the surge arrester’s voltage protection level (Uspd) and its disconnect circuit breaker (Udisconnector). The sensitive load will think the overvoltage from the lightning current is, say, 2500 V. And because its impulse withstand voltage is only 1500 V, it will be vaporized.

The answer is to shorten cable lengths, as Figure 2 shows, in 3 steps. 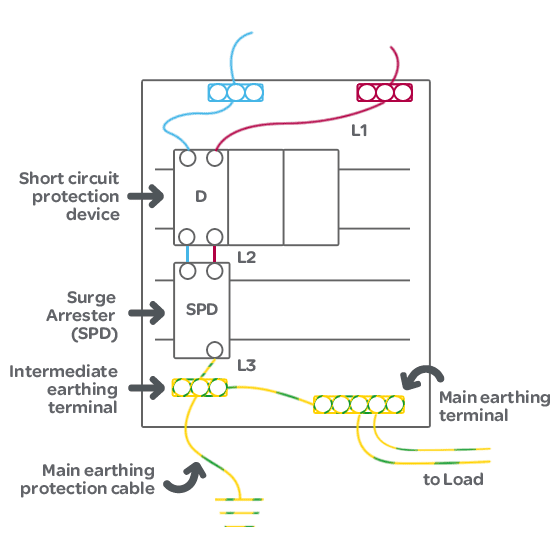 The same principle applies to cables between surge arresters and pieces of equipment. If they are longer than 10 meters, you should install a second surge arrester as close as you can to the equipment. Use the same brand of surge arrestor and stick to the manufacturer’s coordination table.

And don’t forget. Transients can slip into a building or facility through phone lines, computer networks, CCTV systems – you name it. So, install surge arrestors on any device or system that is prone to overvoltage or is particularly sensitive.

Lightning surge protection: Two is better than one!