Now that we’ve established that SPDs should be at the heart of a lightning protection system, it’s time to think about how to choose the right surge protection. Easier said than done. Here are some rules of thumb for installing a surge protection device (SPD): 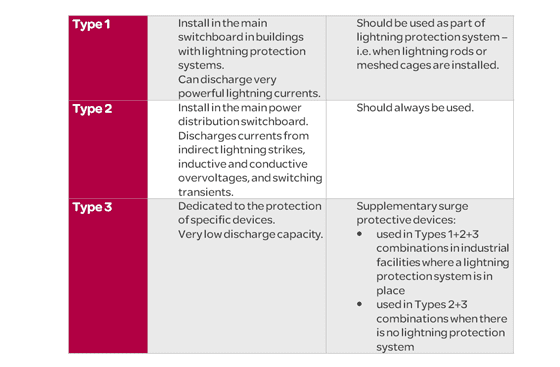 To protect a distribution switchboard, you need only install a Type 2 SPD with discharge capacity In>5kA.(8/20).

Assessing risk is generally a complex, painstaking process. A good starting point is to think about what kinds of areas are most and least at risk. You can then consider the type of SPD best suited to the kind of building you’re planning to protect – if it has a single service entry switchboard.

Lightning strikes 90% of the earth. The high lightning areas are on land located in the tropics. Areas with almost no lightning are the Arctic and Antarctic, closely followed by the oceans which have only 0.1 to 1 strikes/km2/yr.

However, even if the density of strikes (Ng) doesn’t look risky, many countries like France, for example, include Ng in its national standard NF C 15-100. Indeed lightning can be dangerous for your electrical installation and is taken into account by global standards.

One or two tips for risk assessment

Use European HD 60364-5-53, for example. Some countries make it compulsory to use this standard when considering surge protection for big and/or highly sensitive buildings like industrial facilities, hospitals, and data centers.

Although SPDs don’t trip, the following end-of-life scenarios are possible:

Although you may have to choose an external circuit breaker, more and more manufacturers incorporate them in the same enclosure.

You should choose a circuit breaker according to the short circuit current of the building where the SPD is installed. For example, a disconnection circuit breaker with a short-circuit breaking current lower than 6kA is suitable for a residential building. For an office, it is usually 15kA or 20kA.

But determining matches is a delicate business, many parameters need to be considered while selecting the external short-circuit protection (Breaking capacity, Lightning current withstand, Coordination with upstream protection)

That’s why we suggest you reference our Design Guide which will allow you to more easily select the right disconnection circuit breaker.

Choosing the right SPD and protective circuit breaker – at a glance

The schematic below gives you an idea of the basic parameters you should factor into your choice of surge protection. 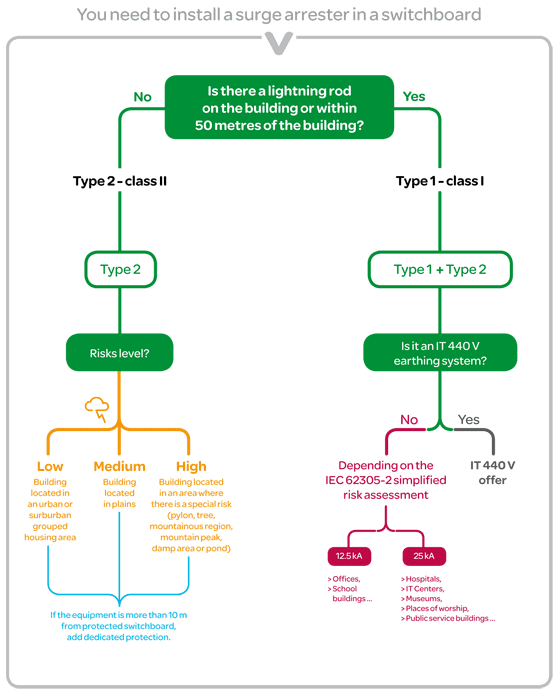 Check out our Surge Protection Device Selector to better know about choosing the right surge protection devices and circuit breakers for the right application.

Lightning surge protection: Two is better than one!

Arresting the surges in lightning strikes

What is a surge protector ?