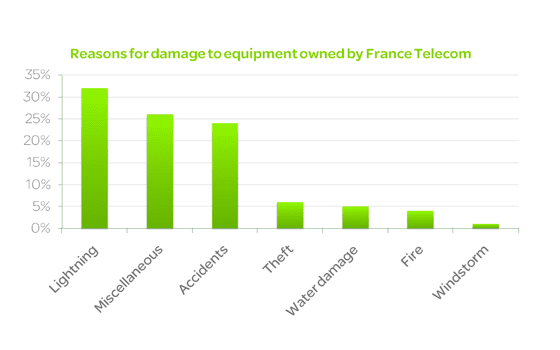 Lightning is the single biggest cause of damage to and destruction of electrical and electronic equipment in industrial facilities, commercial buildings, and homes. The fact is borne out by stats from insurance companies worldwide and telecom operators like France Telecom. The US National Lightning Safety Institute compiled a list of the costs and losses attributable to lightning in 2008.


Types of lightning strikes and transients

Direct lightning strikes can generate millions of volts and hundreds of thousands of Amps and high-level overvoltage transients. They may seriously a buildings’ physical structure, electric distribution system, and cause fires. And the electromagnetic pulse energy of a lightning strike can affect electrics and electronics 2 kilometres away!

Indirect lightning strikes are one, though not the only, cause of low-level transients. Strikes in the vicinity of a building and on powerlines lead to overvoltage induced by the electromagnetic fields from the lightning current. Though typically less damaging than direct strikes, they are enough to melt electronic circuitry.

Both professionally and personally (as a member of the French Lightning Protection Association (APF), my number one concern is to raise awareness of lightning. Although I have been a member for well over 15 years, I still wonder at the widespread ignorance. The vast majority of homes have no lightning protection at all. And many residential and commercial buildings, built as late as the 1990s, have no surge protection devices. These became compulsory only in 2005 with the introduction of international standard EN 62305.

One misconception that needs to be urgently dispelled is the widespread confusion between lightning rods and surge arresters. People think they the same thing. Consequently, they believe that lightning rods protect buildings and their occupants. They don’t. At least not fully and not on their own.

A lightning rod is a primary lighting protection device – along with overhead earth wires and Faraday cages. It is a metal rod perched on the roof of a building that provides a low-resistance path to earth. It is connected to a down-conductor which runs electric currents down to a nearby conductive grid buried in the ground.

Primary protection, however, means partial protection. The lightning rod’s conductive grid is connected to the primary busbar in the switchboard, so lightning current flows from the ground into a building’s power distribution system.

Nor do lightning rods protect against surges arising from the induction effect of lightning’s electromagnetic field or from strikes to overhead lines or into the ground nearby.

That is where surge arresters (also known as surge protection devices [SPDs]) come in.

Surge arresters protect power distribution and telecommunication systems from high voltage surges caused by lightning strikes. They arrest surges currents at their point of installation, discharging them to earth so that they bypass critical equipment.

Surge arrestors also afford protection against overvoltage resulting from constant self-inducted and capacitive load switching. And because electronics are ever more critical and ubiquitous, surge protective devices play a twin role : they protect microprocessors against wear-and-tear and lightning.

Types, or class, of SPDs and their circuit breakers

You may have heard contractors and other electricity professionals talk about “classes” or “types” of SPDs. Different types and combinations thereof are installed in different protection zones to meet different needs. Let’s briefly consider Types 1 and 2.

To avoid any risk of permanent overvoltage which would short-circuit and damage a switchboard, the surge protective device must itself be protected by a disconnection circuit breaker (MCB).

Part 4 of EN/IEC 62305 made surge protectors compulsory in buildings where lightning rods are installed. The most comprehensive lightning protection system should therefore comprise :

6 facts and fictions about lightning

When lightning strikes, is your PV installation protected?