The surprise election of Donald Trump as the 45th President of the United States has sparked concern that the 10-year old Renewable Fuel Standard might come under attack by his administration despite Trump’s repeated comments during his campaign and after his November win that he supports ethanol in US transportation fuel. Ethanol is the primary renewable satisfying the RFS, with biomass-based diesel the second largest contributor in meeting the mandate.

The RFS has several nested categories including cellulosic fuel. The renewable industry’s failure in producing enough cellulosic fuel to meet the mandate—or should we assign blame to unrealistic legislators in setting the target too high—has allowed the RFS to come under criticism.

The high volume requirement for the renewable fuel nested category, overwhelmingly satisfied by corn-based ethanol, is another area of protest against the RFS. The increasing volume required to satisfy this portion of the RFS can’t be met with E10 alone, a 10% concentration of ethanol in gasoline, while restrictions remain for a higher concentration for conventional fuel vehicles. Meanwhile, flex-fuel vehicles that allow for a variety of higher ethanol blends in gasoline have only modestly added to US ethanol consumption.

This reality has triggered adjustments to the statutory volume mandates under the RFS, and also spiked costs for many of the oil refiners that are obligated to meet the mandate through their purchase of Renewable Identification Numbers—the credit used to show compliance with the RFS. RINs, which are generated with the renewable and move through the supply chain with the blendstock, can be separated and sold in the open market. RIN values surged in 2016 in a repeat performance from 2013 when ethanol neared the 10% “blend wall,” prompting the US Environmental Protection Agency to downgrade the volume requirements under the RFS.

Biomass-based diesel, primarily biodiesel made from soya oil, fats and grease while renewable diesel volume continues to increase, has largely been shielded from these criticisms. Indeed, biomass-based biodiesel has moved into the breach, covering volume shortfalls in other nested categories to more closely align annual RFS volume obligations issued by the EPA with the statute.

On November 23, 2016, EPA, the administer of the RFS, finalized 2017 volume requirements for obligated parties—oil refiners and importers of petroleum-based transportation fuels—that remain below statute level, although above their proposal issued earlier in the year in May.

American Petroleum Institute President and CEO Jack Gerard reiterated the trade association’s position to end the RFS, saying at API’s annual luncheon on January 4 in Washington, DC, “repeal it, or significantly reform it.” He suggested a cap on ethanol content in gasoline at 9.7% which has previously been proposed in the US Congress would satisfy concerns by the oil and gas trade group.

API highlighted how the US energy landscape has changed since the current RFS—the first RFS was enacted in 2005— was passed into law as part of the Energy Independence and Security Act, with the United States moving from energy scarcity to a potential position as net-energy exporter. The trade group said US crude oil and natural gas resources are 63% higher than forecast by the Energy Information Administration when the current RFS was passed into law. Demand for refined fuels is also below EIA projections with US gasoline demand 10% lower than what was forecasted 10 years earlier.

“As we approach the 10 percent ethanol threshold in our fuel mix, which could mean substantial economic harm to American consumers, it is imperative that Congress revisit this broken RFS policy,” said API in their “2017 State of American Energy.”

The price of RINs were volatile in November and December 2016 following the election of Trump, tumbling in mid-November on the uncertainty of what his presidency means to the RFS before rallying in response to the EPA’s finalized 2017 volume requirements and sentiment Trump won’t change the program.

However, several of Trump’s nominees for positions in his administration have been critics of the program, triggering selloffs in the RIN market. They include Oklahoma’s Attorney General Scott Pruitt, nominated to head the EPA, an agency he has legally challenged on several occasions. Former Texas Governor Rick Perry who has been nominated as head of the Energy Department, a department he said in 2012 he would eliminate if president during a failed run to win the Republican nomination. In 2008 as the governor of Texas, Perry petitioned the EPA for a 50% waiver of the RFS volume requirements because enacting the full RFS would cause “severe economic harm,” which was denied by the EPA.

Trump chose billionaire Carl Icahn to be a special advisor on rationalizing regulations. Icahn, a majority owner of an independent oil refiner, famously opined in an editorial in 2016 that Pablo Escobar, the now deceased Columbian drug lord, would have found speculating in the RIN market more profitable than trafficking cocaine. Independent refiners that lack blending capacity have seen profits evaporate because they must purchase RINs.

However, Iowa Governor Terry Branstad, an ardent supporter of the RFS and Trump’s choice to be the US ambassador to China, has said Trump continues to support the RFS, calming the renewable fuels industry to a degree.

Adding to the worry for the biodiesel industry is the lapse of a US$1.00 tax credit paid to blend biomass-based diesel into petroleum-based diesel, which expired on the last day of 2016. This credit has been a critical bridge between higher costing biodiesel and petroleum-based diesel, and the uncertainty on whether it would be extended into 2017 greatly limited trading for forward physical deliveries through the later part of 2016.

“There is a clear correlation between the tax incentive and increased biodiesel production, which has grown from about 100 million gallons in 2005, when the tax incentive was first implemented, to a more than 2.5 billion gallon market in 2016,” said Anne Steckel, vice president of Federal Affairs for the National Biodiesel Board in a news release. “With less than a decade of commercial-scale production, biodiesel remains a young and maturing industry that needs stable, long-term tax policy to continue meaningful growth.”

Considering Trump’s plan to close tax loopholes and expectations Republicans, which control both the Senate and the House of Representatives, would rewrite the US tax code there is speculation that this credit won’t be reinstated. If this assessment is correct, spot transactions could remain constrained, although imports would likely decline.

“That difference is 520 million gallons in 2017, much larger than in the previous two years,” they wrote in their farmdoc daily on December 7, 2016. “An important issue with regards to future implementation of the RFS, then, is the magnitude of the advanced mandate push, if any, under a new Administration.” 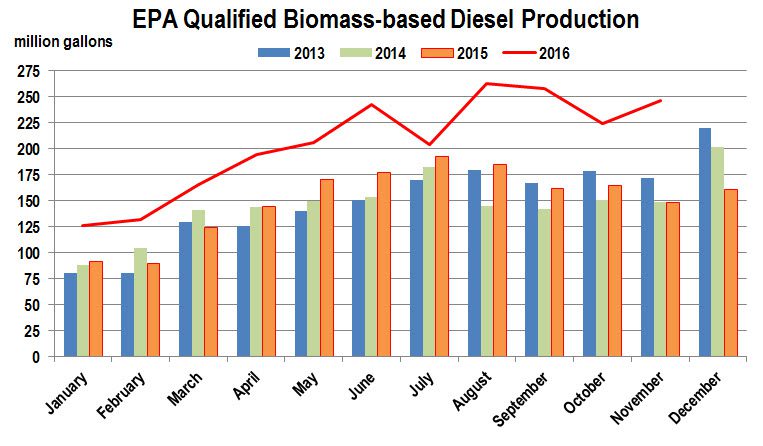 “[W]hile annual production of and consumption of biomass-based diesel and its feedstocks will likely increase substantially by 2022 in order to fulfill the advanced mandate, the magnitude of the increase could vary over a wide range depending on how much of the cellulosic mandate is effectively converted into additional biomass-based diesel mandate,” said Irwin and Good.

In their most recent Short-term Energy Outlook, the EIA projects distillate fuel consumption to grow 1.5% to 3.94 million bpd in 2017 after dropping 3% to 3.88 million bpd in 2016 and 1% to 4.0 million bpd in 2015. The projected pickup in demand comes alongside expectations for quicker economic growth in the United States in 2017, with the latest data available from the US Bureau of Economic Analysis estimating a 3.5% annualized growth rate for the US economy in the third quarter 2016—the greatest quarterly expansion in two years. 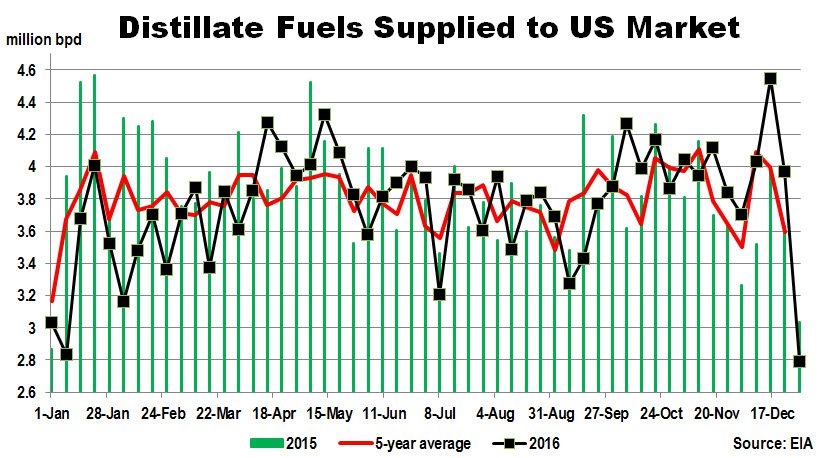 In the United States, growth in diesel demand correlates closely with an expanding economy since diesel is primarily used in commercial and industrial settings.

Freight movements in November 2016 suggest the trend continued into the fourth quarter, with the Am
erican Trucking Associations’ advanced seasonally adjusted For-Hire Truck Tonnage Index climbing 5.7% from year prior.

“While I think the November gain overstates the strength in the freight markets, I do believe we are seeing some improvement that will continue into 2017. Retail sales are good, the housing market is solid, and the inventory overhang throughout the supply chain is coming down, all of which will help support truck freight volumes in 2017,” said ATA Chief Economist Bob Costello.

Trucking serves as a barometer of the US economy, representing 70.1% of tonnage carried by all modes of domestic freight transportation, including manufactured and retail goods. 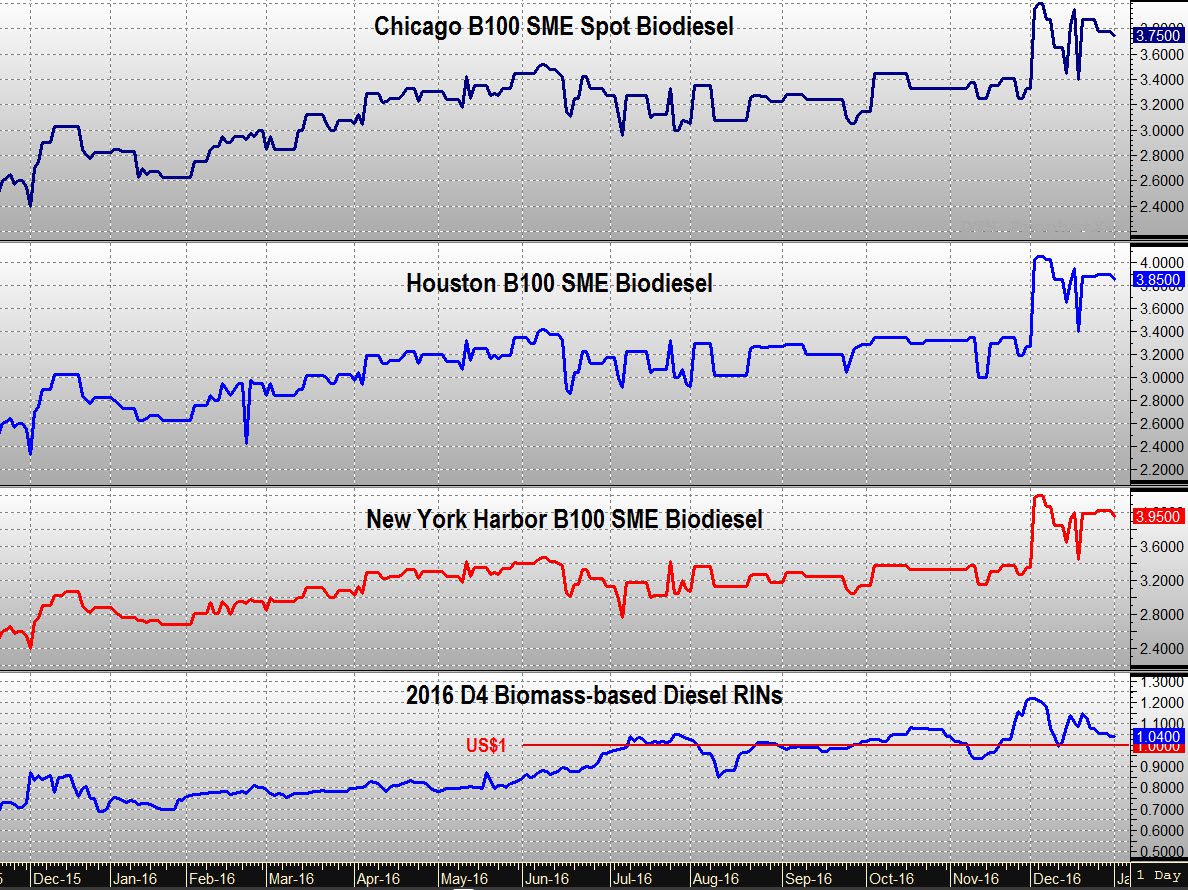 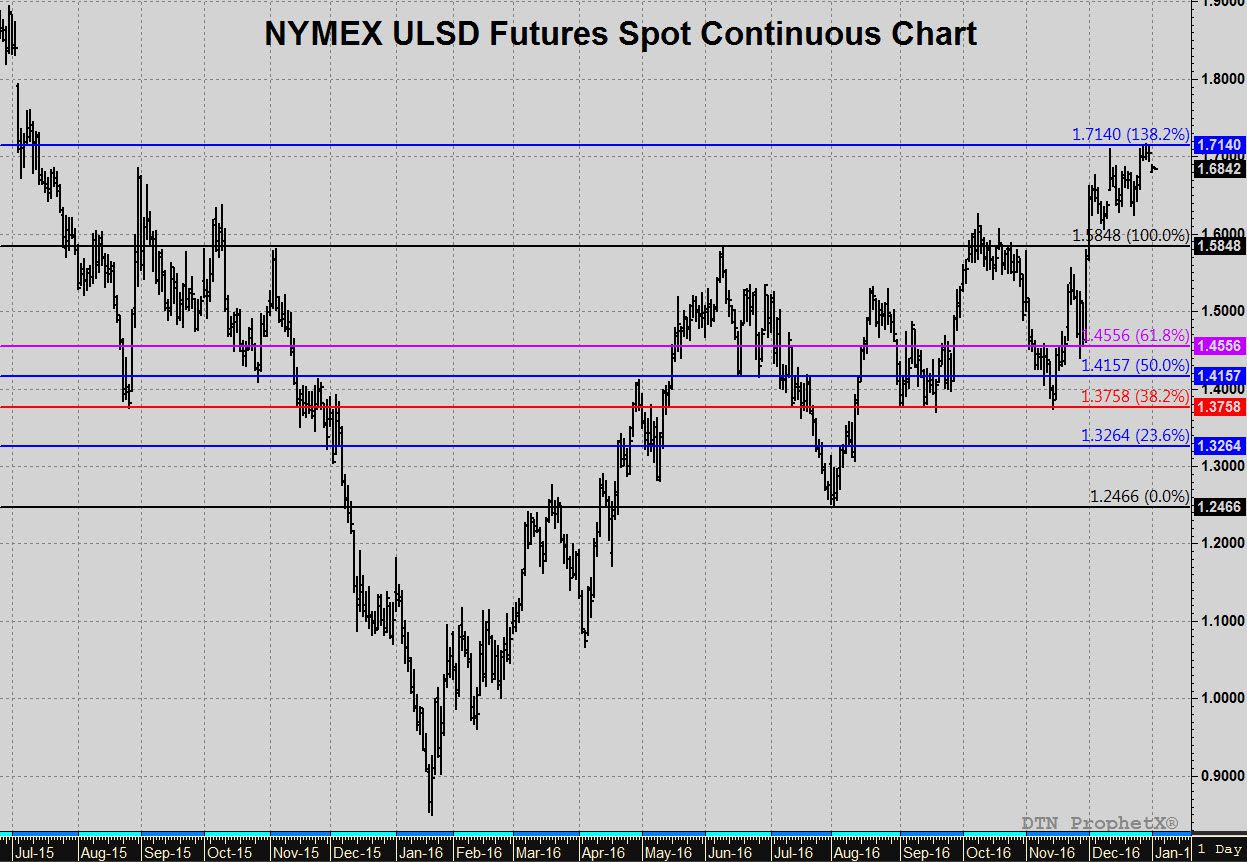 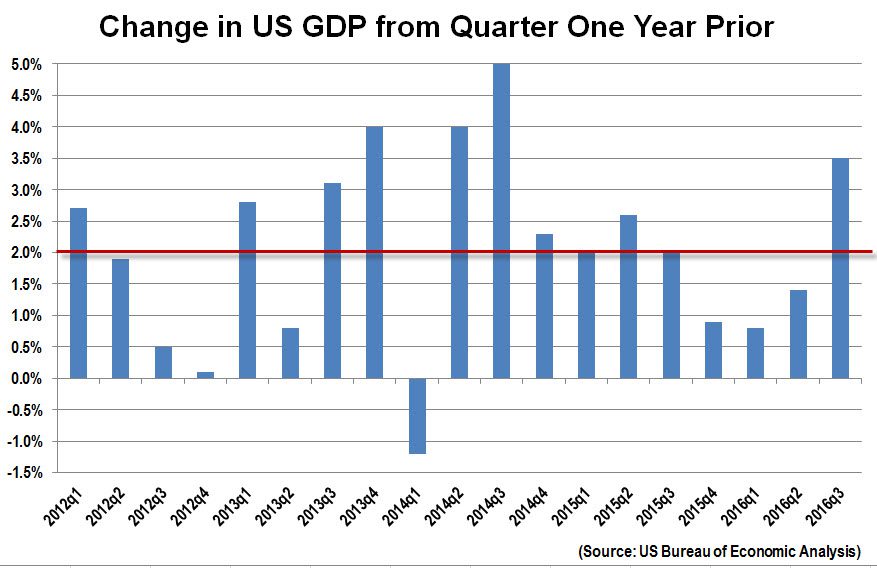