The gasoline futures contract traded on the New York Mercantile Exchange surged 12% in December, with reformulated blendstock for oxygenate blending futures establishing a new calendar year high for 2016 at $1.7038 gallon between the Christmas and New Year’s Day holidays. Gasoline futures outpaced the advance by West Texas Intermediate and ULSD futures in December which both rallied 9%, as bullish sentiment took control of the market.

Spurring the market’s bullish psychology were agreements to reduce production by the Organization of the Petroleum Exporting Countries on November 30 joined by a companion pact on December 10 when 11 non-OPEC producing countries also agreed to cut output. Combined, the two agreements call for a 1.758 million bpd cut in production that, if adhered to, would push global oil demand over production midyear, according to several analysts including the International Energy Agency.

The agreements took effect January 1 and are for six-month terms, although country commitments call for an average at the quota level to be reached by June, so some production cuts might not start right away. This feature could puzzle analysts during the interim as they scrutinize monthly production data for compliance, likely sparking increased price volatility.

Noncommercial traders, also known as speculators since they are not using a futures contract to underpin a physical position in the underlying market, covered short positions and accumulated long positions in NYMEX RBOB futures in reaction to the November 30 agreement. A long position is taken on expectation prices would move higher over time. 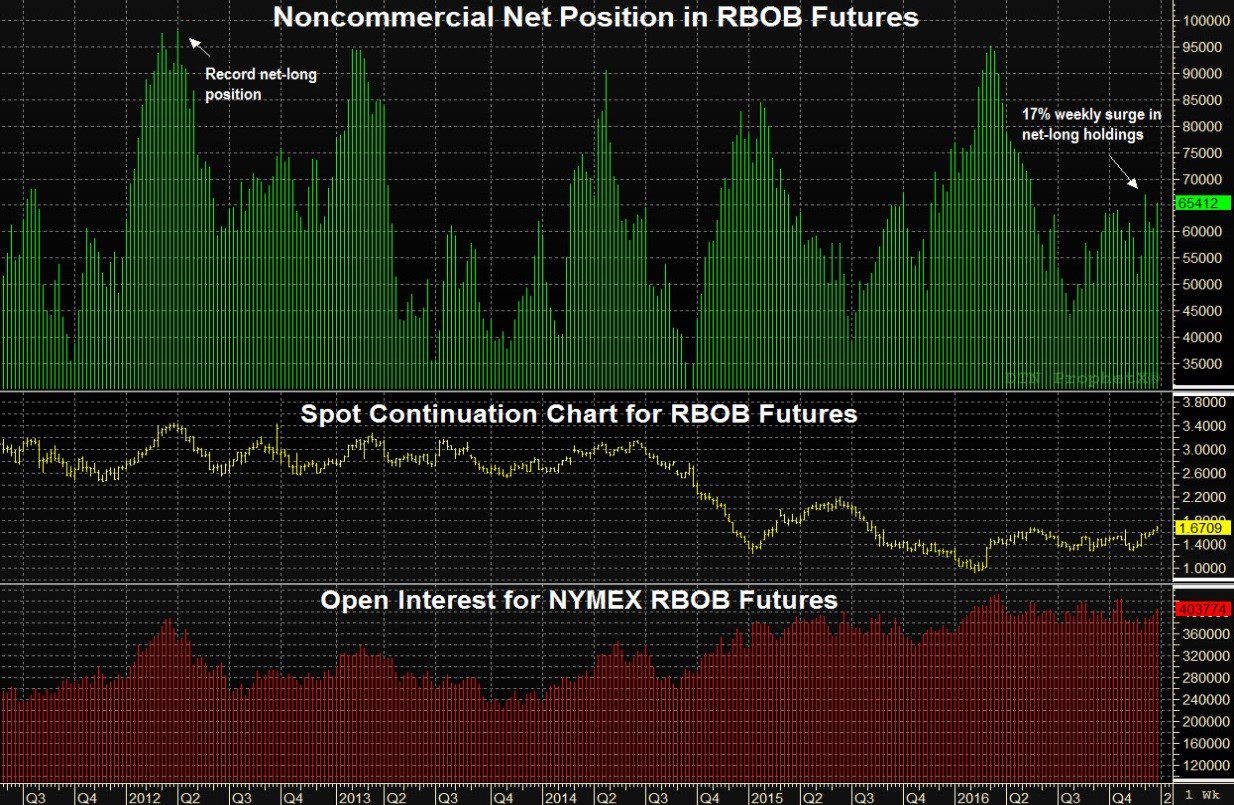 A rebalancing market will still need to contend with an abundant quantity of oil in inventory. However, the production cuts would gradually chop down the mountain of supply that has grown over the past couple of years and, in turn, underpin a higher global oil price.

This expectation was lent support late in 2016 on a string of data suggesting a quicker expansion of the US economy in 2017, with the Bureau of Economic Analysis in late December reporting a 3.5% annualized growth rate in US gross domestic product for the third quarter 2016–the largest quarterly expansion in two years. Greater economic activity consumes more oil.

The US Federal Reserve lifted the federal funds rate in December for only the second time in 10 years on evidence it finds supporting a stronger US economy that, in large part, propelled the US dollar to a 14-year high. Consumer confidence in the United States reached a12-year high in December, with a new administration in Washington, DC, seen creating broader economic opportunity.

A confident consumer is willing to spend more of his or her hard earned currency which bodes well for fuel retailers. As we look at RBOB futures forward curve, we see an increasing premium built into gasoline prices in early 2017 which reach the mid to upper $1.80 gallon range in April, May and June. 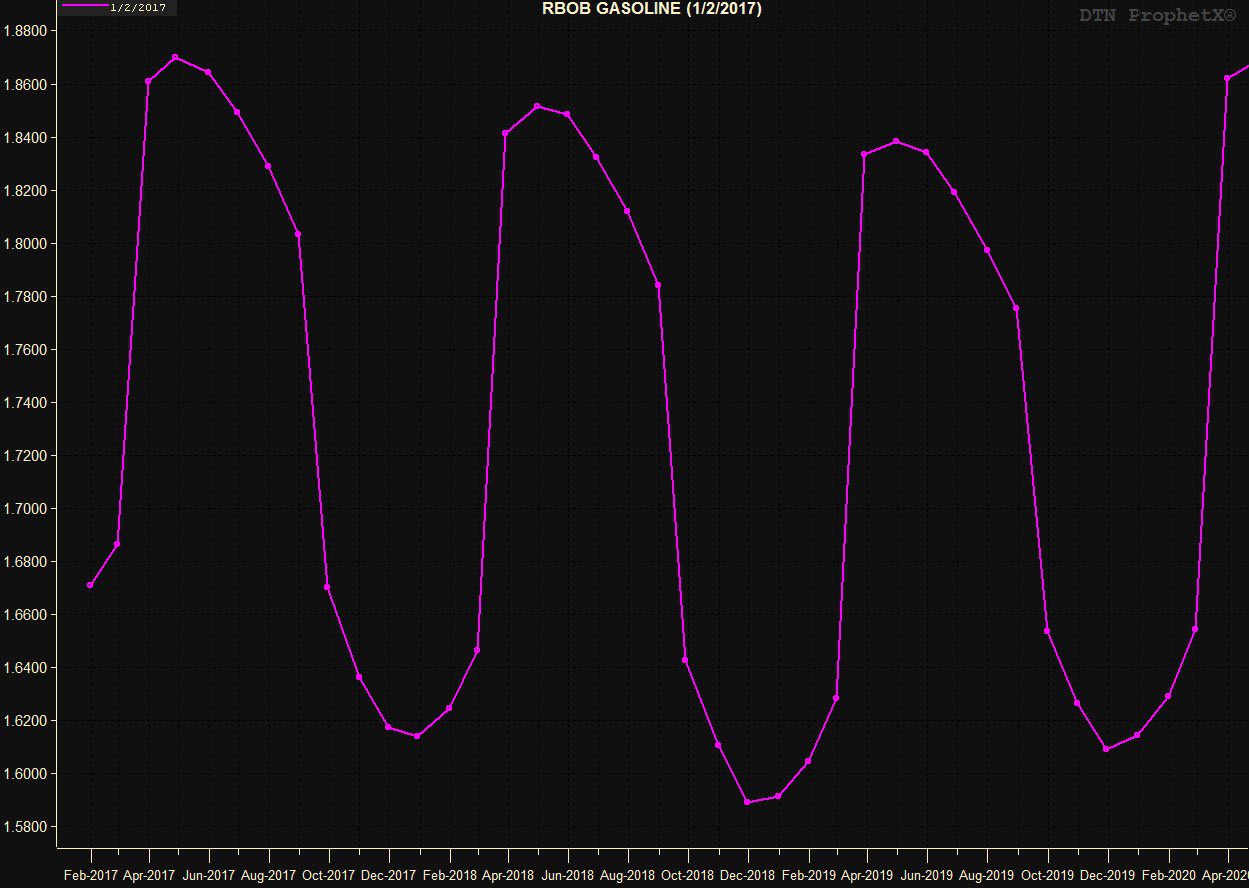 Climbing gasoline prices could erect a speed bump to higher sales volume for retailers and suppliers alike in 2017 should demand slow, as witnessed in in late 2016. Although implied gasoline demand set a record high in 2016, demand slowed late in the fourth quarter against the comparable year-ago period as gasoline prices gained.

The US average for regular grade gasoline sold at retail outlets reached a six-month high of $2.364 gallon on December 26, according to EIA data, 32.5cts above year prior. The lower price point in late 2015 was seen incentivizing demand.

In a recent note to clients, Tim Evans, futures specialist with Citi Futures, highlighted gasoline demand’s response to prices, saying, a decline in gasoline prices in 2015 lent support to demand with growth up as much as 3.4% in the 12 months ended in September 2015.

“Since then we’ve seen a slowing to 2.0% growth in the 12 months through September 2016. Looking ahead to next year,” said Evans on December 22, “we would not be surprised if growth slows to something more like 1.0-1.5%, a more sustainable pace in our view.” 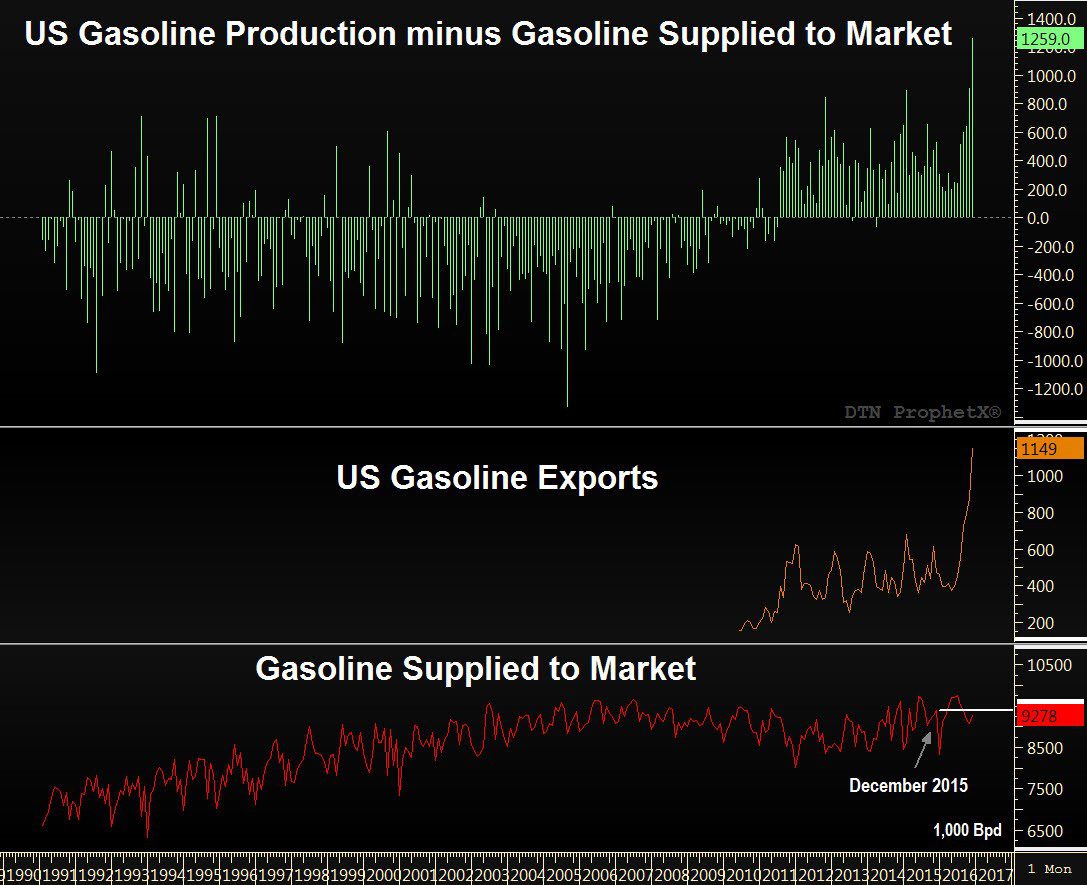 Gasoline exports from the United States, which are included in the products supplied statistic, surged in 2016, reaching a weekly record high of 1.1149 million bpd in late December. Moreover, the trend looks sustainable, as US refineries produce more gasoline than needed by the domestic market amid the country’s oil and gas renaissance.

Much of those exports have been shipped to Mexico, where growing domestic consumption joined refinery constraints and outages to spur the demand for US barrels. Mexico is gradually liberalizing its gasoline market, including on imports, which would aid US refineries that are producing well above their historical average.

Have Gasoline Futures Reached a Bottom?