The higher cost of biodiesel compared with petroleum-based diesel fuel, especially in the third year of low global crude oil prices, requires a bridge to incentivize demand, and for several years the biodiesel industry in the United States has had those incentives amid multiple government programs. 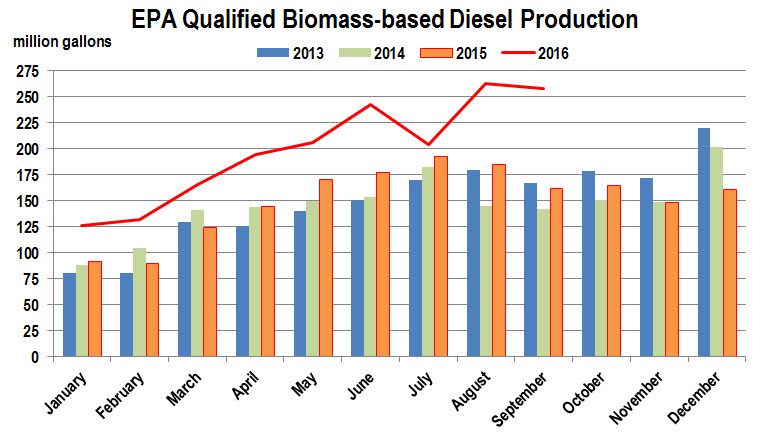 The US biodiesel industry is an exceptional growth story, but also a challenging one that has seen a large number of bankruptcies, and frustrated traders too, when federal programs lapse or lack clear direction on how they will be implemented. These waiting games have pushed otherwise promising companies that lack protracted financial durability out of business or into distressed sales. Indeed, the industry continues to consolidate that defines its maturing status as much as it demonstrates the risk in government dependence.

In early November, and deep in the shadows of an extraordinarily contentious US presidential race, the US biodiesel industry awaits the finalized mandate for renewable fuel demand for 2017, and the renewal of a tax incentive to encourage blending. Even as clarity is sought on these two programs, a stream of news releases from the US Department of Justice highlights the fraud seemingly endemic in government programs, and so frequently twinned with unintended consequences.

The US Environmental Protection Agency appears to be on target in meeting its end of November deadline in issuing the volume obligation for renewable fuels under the Renewable Fuel Standard for 2017, having submitted their finalized Renewable Volume Obligation to the White House Office of Management and Budget in mid-October. OMB reviews such government diktats to ensure conformity with the administration’s goals and policies.

The law establishing the current mandate, which is known as RFS2, lists the volume of renewables obligated parties must use every year, which vary across several nested categories of renewables, and increase annually through 2022. However, the EPA, the administrator of the RFS, must review the market to ensure there will be enough supply to meet the mandate, and that pushing this supply into the market doesn’t cause serious harm to the economy or environment.

The legislated mandate for 2017 is that 24.0 billion gallons of renewables in five categories of varying quantities are used in lieu of petroleum-based products, although the EPA proposal released in the spring at 18.8 billion gallons is well below the target due to an inadequate supply of cellulosic fuels and limited space in the gasoline pool based on current fuel specifications, auto manufacturer restrictions and consumer choice.

Of that 18.8 billion gallons, biomass-based diesel fuel accounts for 2.0 billion gallons, with biodiesel also able to satisfy the advanced biofuel mandate proposed for 2017 at 1.68 billion gallons. Oil refiners and importers must meet their RVO, whether through blending or in buying a compliance credit in the market known as a Renewable Identification Number.

RINs vary in inherent value based on the renewable they were generated by, with D4 RINs satisfying the biomass-based diesel nested category trading over $1 gallon from late September through the full month of October. A finalized RVO above the proposal would likely trigger a higher RIN value in response in December, with RIN valuations seen climbing in 2017 as obligated parties struggle to squeeze more ethanol into the US gasoline pool.

The RIN is a critical component in a producer’s income stream. Since a RIN can be separated from the renewable as it moves through the supply chain and sold in an open market, speculators have done the math and have squeezed RIN prices higher, knowing the RIN market will continue to tighten.

There’s also been a considerable amount of fraud around the RIN program that have caused harm to obligated parties amid the EPA’s buyer beware policy. Doug Parker, president of E&W Strategies and a former Director of EPA’s Criminal Investigation Division who oversaw investigations into the Deepwater Horizon disaster and Volkswagen’s defeat device fraud case among others, said current RFS-related fraud cases reflect $271 million in documented fraud and another $71 million in seizures of illicit profits.

“In my experience this represents a fraction of the actual overall fraud impact, and significantly larger losses will be formally identified in upcoming court filings,” said Parker in a white paper issued early September commissioned by Valero Corporation.

RINs associated with the fraud will be retired, and parties that bought those RINs will be forced back into the market to reacquire a compliance credit, further tightening the RIN market.

A tax credit that pays $1 per gallon for blending biodiesel into a petroleum-based fuel known as the blender’s credit expires at year’s end, and has stymied forward term transactions for biodiesel because of the uncertainty in knowing whether the credit will be passed by the US Congress for another year or more. The tax credit has been allowed to expire four times over the past 10 years, and has been made retroactive at times, creating windfall profits, yet the uncertainty has challenged business planning and trading activity.

A bitterly divided Congress adds another layer of concern that the tax credit will again be extended, and in what form. The blender’s credit has been criticized since imports can also qualify for the tax subsidy with one estimate forecasting US biodiesel imports would reach 800 million gallons this year. There have been calls to move the credit from the blending level to producers.

A bill to extend the credit, H.R. 5994: Biodiesel and Renewable Diesel Incentive Extension Act of 2016, was assigned to a committee in mid-September that will consider sending it to the House or Senate for a vote. PredictGov gives the bill a 1% chance of being enacted.

Producers ramped up production in August and September, with EPA qualified biomass-based diesel output at 1.79 billion gallons for the first three quarters of 2016, which compares with 1.81 billion gallons for all of 2015 when you strip out renewable diesel. Renewable diesel uses the same feedstocks as biodiesel but employs a different technology.

Spot transactions for biodiesel remain limited early in the fourth quarter, but when completed are primarily transacted in a differential against the ULSD (ultra-low sulfur diesel fuel) futures contract that trades on the New York Mercantile Exchange. After a rally from September lows into October, ULSD futures were range bound until a selloff in closing out the month. 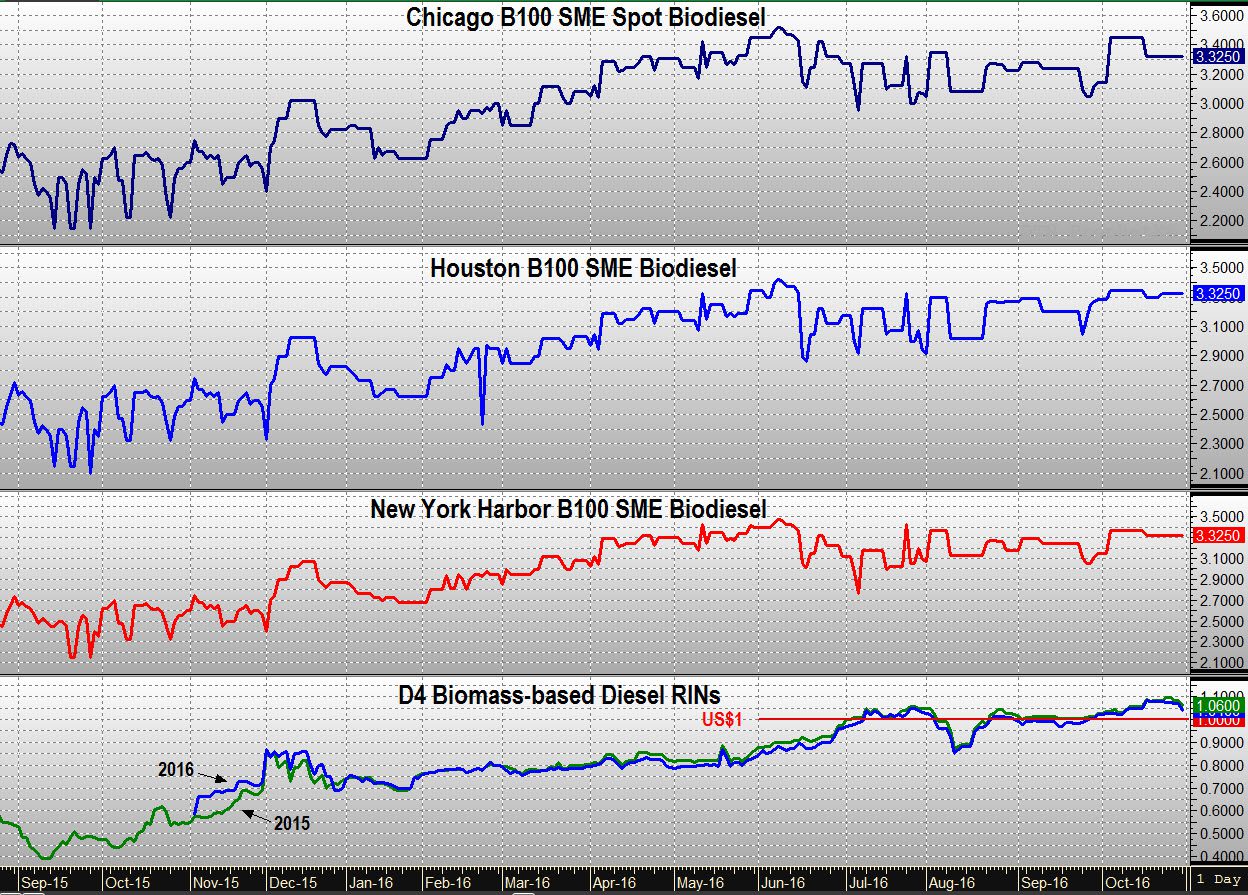 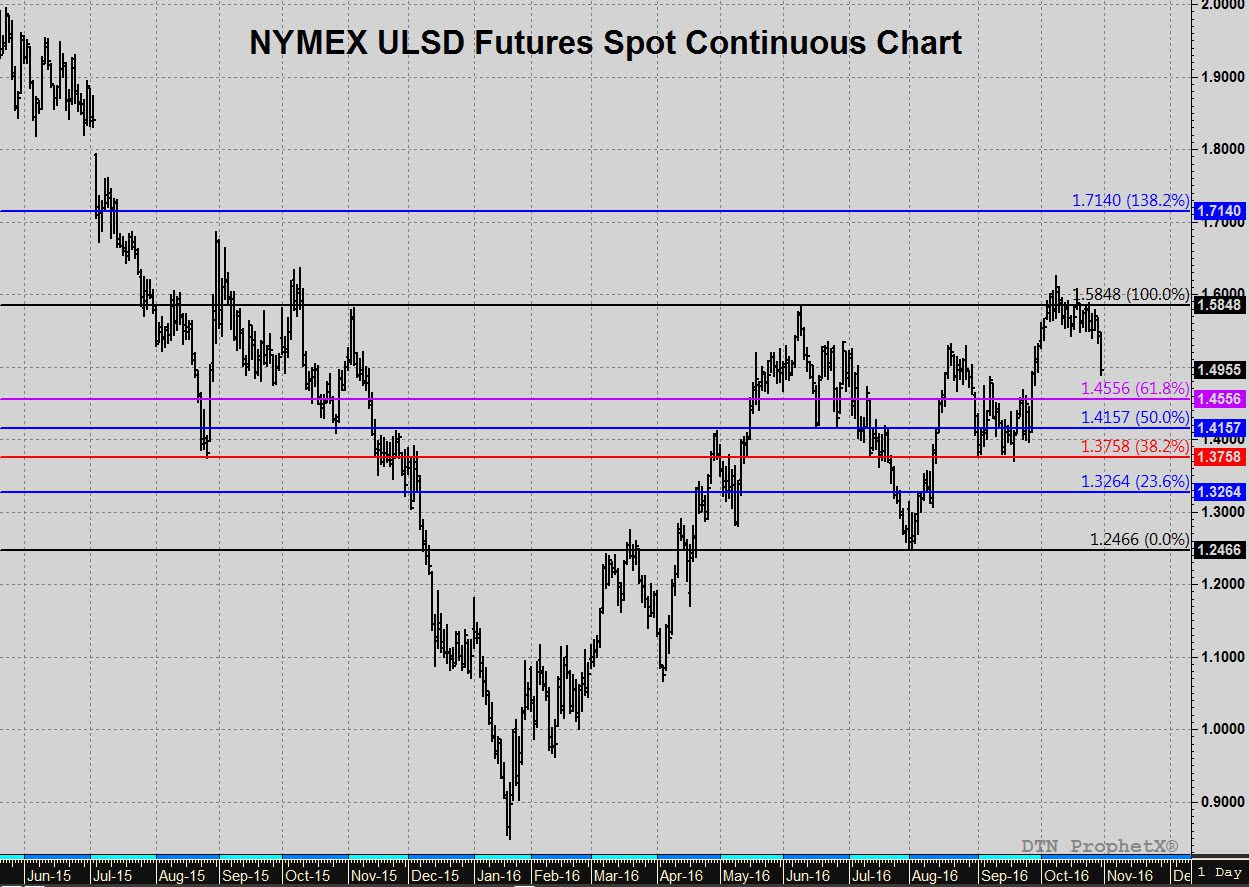