Following progressively higher output of biomass-based diesel in the United States during the first six months of 2016, producers dialed back their yield in July to a three-month low and shrunk the year-on-year increase in monthly output to 5.9% from a double-digit growth rate realized each month during the first half of the year.

Biomass-based diesel production meeting the US Environmental Protection Agency’s requirements in satisfying the Renewable Fuel Standard in July totaled 204.0 million gallons, 11.3 million gallons more than in July 2015, with output for the first seven months of 2016 reaching 1.27 billion gallons, 280.6 million gallons or 28.4% above the production rate for the comparable year-ago period. 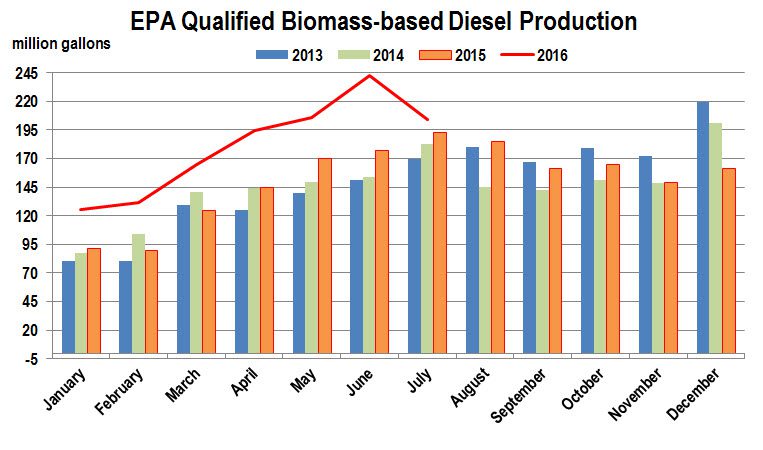 An expanding demand mandate under the RFS, which requires an increasing volume of renewable fuels to be used instead of petroleum-based fuel, continues to underpin the biodiesel market and drove the sharp production gains seen so far this year. Biomass-based diesel is one of several renewable categories to satisfy the RFS alongside ethanol and cellulosic and advanced biofuels, with 1.9 billion gallons of biomass-based diesel required this year under the mandate and 2.0 billion gallons in 2017.

The National Biodiesel Board, the trade organization for the US biodiesel industry, indicates the United States used 2.1 billion gallons of biodiesel in 2015.

However, trading activity is stuck in a low drive, with extended term agreements not getting done while only a smattering of deals in the spot market are transacted. The majority of business continues at the rack level, much of which is already blended with ultra-low sulfur diesel fuel at the wholesale distribution point.

Two issues cloud the near-term horizon for US biofuel traders, marketers and producers, which include a lack of demand growth for distillate fuels–ULSD and heating oil, and the end-year expiration of a tax credit paid to blenders of biodiesel.

Data from the US Energy Information Administration shows implied demand for distillate fuel cumulatively in 2016 through August 19 196,000 bpd or 5.0% lower than during the corresponding timeline in 2015, although distillate supplied to market pulled to parity with year ago during the most recent four weeks of available data. Of that demand, 31.9% were generated by exports, eroding the benefit for US biodiesel blenders.

Distillate demand in the United States continues to emanate from industrial and commercial activity for diesel and winter cold for heating oil grades. A warm 2015-2016 winter sharply reduced demand for heating oil early in the year and remains an unknown for the fourth quarter, while US economic growth hasn’t been above a 2.0% annualized growth rate since the second quarter 2015 when it reached 2.6%.

The most recent reading from the US Commerce Department’s Bureau of Economic Analysis shows a 1.1% annualized growth rate for the U.S. economy in the most recent second quarter and a 0.8% expansion in the first quarter. That followed a 0.9% year-on-year expansion in the US economy during the final three months of 2015.

There is growth in freight movements by truck this year compared with 2015, but it has been slow and inconsistent. The American Trucking Associations’ advanced seasonally adjusted For-Hire Truck Tonnage Index fell 2.1% to 134.3 in July, and the index has declined for the fourth month out of the past five, with July’s reading the lowest since October 2015. In February, the index reached an all-time high of 144, with ATA, the largest national trade association for the trucking industry, starting the index in the 1970s.

“This prolonged softness is consistent with a supply chain that is clearing
out elevated inventories,” said ATA Chief Economist Bob Costello. “Looking ahead, expect a softer and uneven truck freight environment until the inventory correction is complete. With moderate economic growth expected, truck freight will improve the further along the inventory cycle we progress.”

Trucking, which serves as a barometer of the US economy, represents nearly 70% of tonnage carried by all modes of domestic freight transportation in the United States.

US industrial production rose for the second consecutive month in July, reaching its highest point since October 2015, according to the Federal Reserve Bank of St. Louis in their FRED economic data series. In March, output dropped to a better-than two-year low.

The biodiesel industry is again confronted with an upcoming December 31 expiration of a US$1.00 per gallon credit paid to blenders of biomass-based diesel into petroleum-based diesel. The credit was approved for this year in December 2015 when it was also made retroactive for all of 2015.

The approaching expiration of the credit recreates a familiar scenario for the biodiesel industry. The credit has either expired and been reinstated or extended within weeks of an expiry several times in recent years, creating uncertainty for the market. The credit is critical in bridging the price gap between biodiesel and ULSD, and not knowing whether it will be extended into 2017 freezes out long-term deal activity.

The two senators introduced legislation in July that extends the tax subsidy through 2019, and converts it from a blender’s tax incentive to a domestic production credit. The proposal would “appropriately reform this incentive by applying it only to domestic biodiesel production, ending a growing practice where foreign producers are taking advantage of our tax system. Our tax law should not be incentivizing foreign fuel, and this bill fixes that loophole so that we’re stimulating jobs and economic development here at home.”

According to the NBB, biodiesel and renewable diesel imports into the United States totaled 670 million gallons in 2015, accounting for nearly a third of the US biodiesel market.

Soy methyl ester B100 spot biodiesel prices rallied in early August off summer lows registered in early July, pushed higher by climbing ULSD futures traded on the New York Mercantile Exchange. Spot prices trade in an index to the ULSD contract, with NYMEX oil futures rallying in August on speculationmembers of the Organization of the Petroleum Exporting Countries would reach an agreement in late September that regulates their production in an effort to stabilize the global oil market.

The market for Renewable Identification Numbers, the credits used by obligated parties that include oil refiners, blenders and importers to show compliance with the RFS is also heating up–with biomass-based D4 RINs holding above $1.00 for much of July and August.

D4 RINs are lent upside price support from concern over a RIN shortage in the coming years, with obligated parties allowed to carry over as much as 20% of their current year Renewable Volume Obligation into a new year. This RIN banking is exacerbated by the ethanol blend wall, which refers to the 10% maximum concentration point for ethanol in gasoline allowed in all vehicles on US roads. Ethanol has reached this blending point limit, and the RFS demand mandate is set to increase in 2017 and beyond, and is seen pushing RIN values sharply higher in the months ahead. 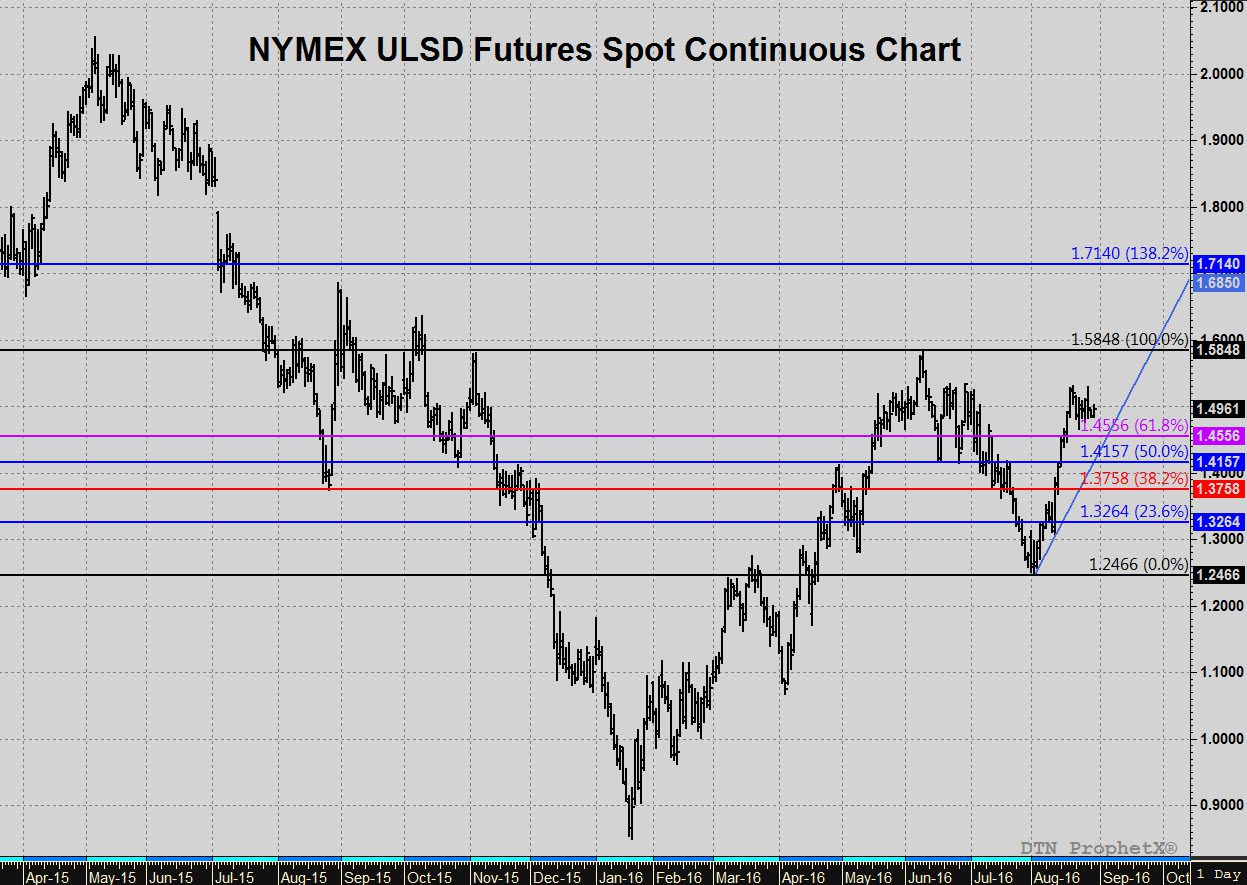 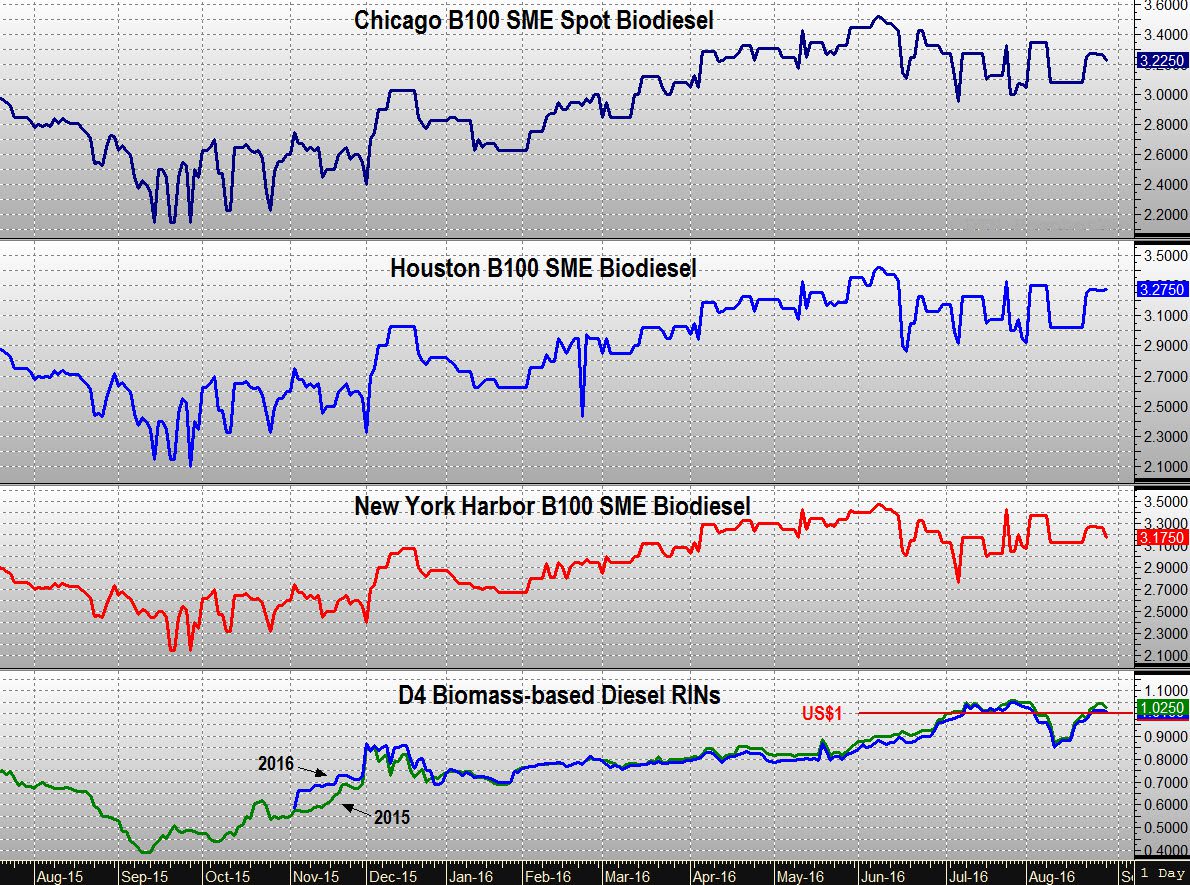