Everywhere and every day we are overwhelmed by articles and talks about the IoT, connectivity, big data, the digital transformation and all the benefits we can derive from this innovative, new technology.

These are exciting times for sure, and maybe even more exciting if you are like me and have been working in industrial automation for many years.  Because what we are seeing today are things that we have been developing over many years now becoming embedded as part of mainstream, modern digital life. 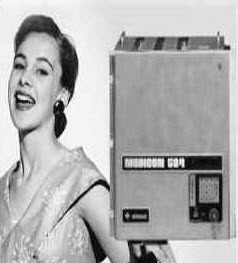 Without overloading you with technicalities, I’m going to give a few examples of things industrial automation has been working on since the 1960s that are now part of today’s digital transformation.

1.The birth of smart edge devices

In 1968, along with a group of engineers, Richard Morley founded Bedford Associates and invented the first programmable logic controller, the 084. He then established Modicon the company, deriving its name from MOdular DIgital CONtrol. If you take a close look at today’s PLCs they are basically smart edge devices that first became reality as the 084. 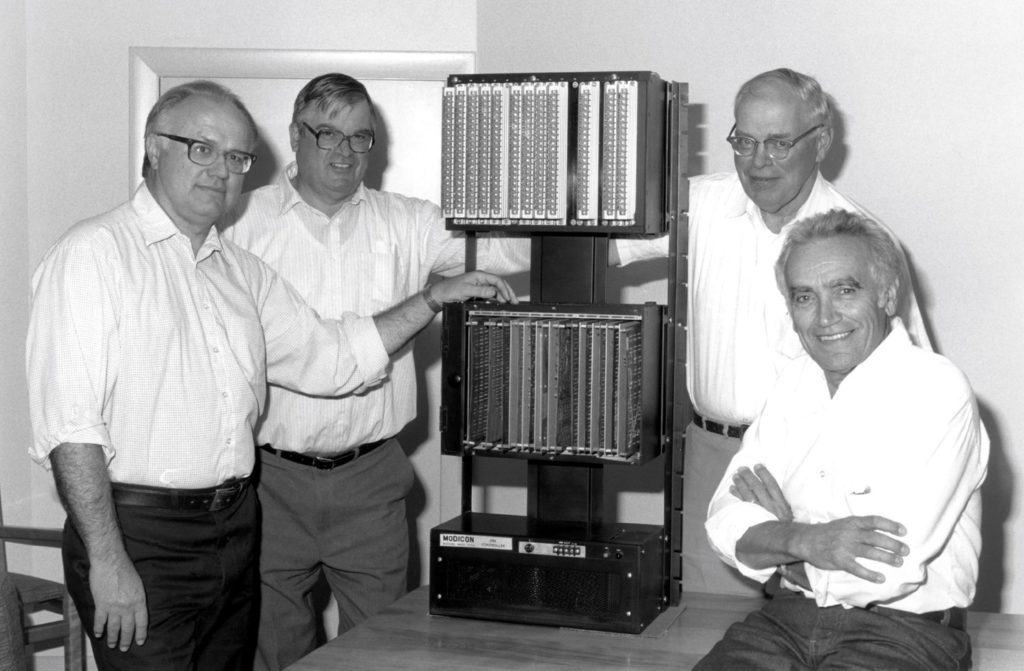 Richard Morley (left), his associates, and the 084, the first PLC

MODBUS Protocol was a messaging structure developed by Modicon in 1979 and used to establish client-server communication between intelligent devices. 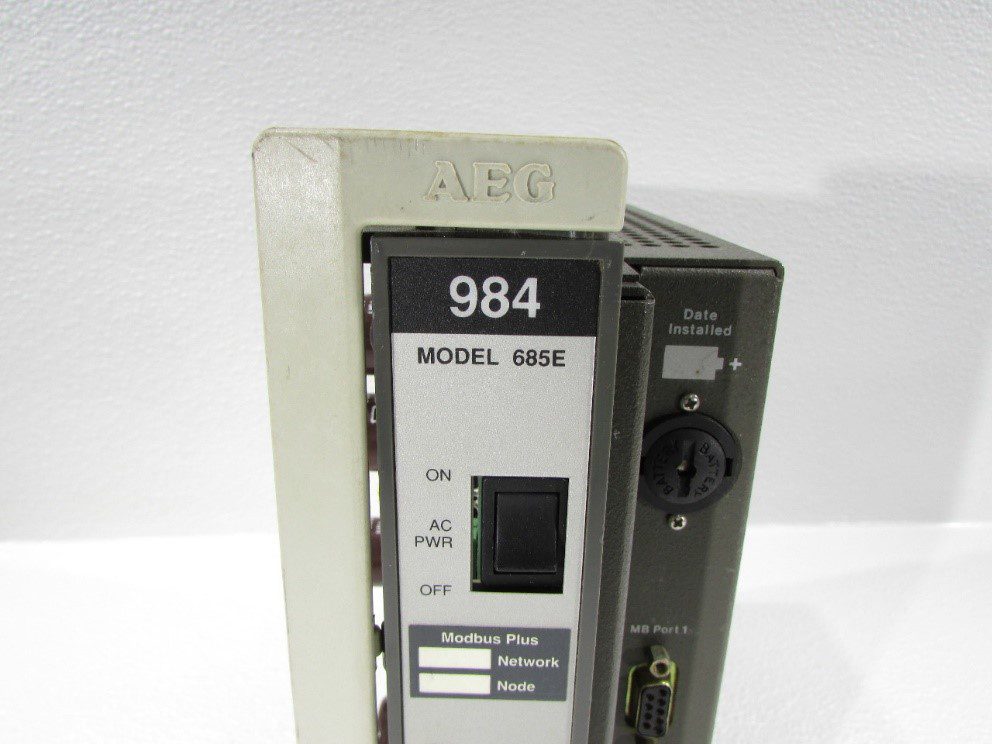 You aren’t seeing things! There is a communication port here in this 984 PLC

In 1997 Schneider Electric created something called Transparent Factory™, an open automation framework based on Internet technologies designed to provide seamless communication between the plant floor and higher level business systems. 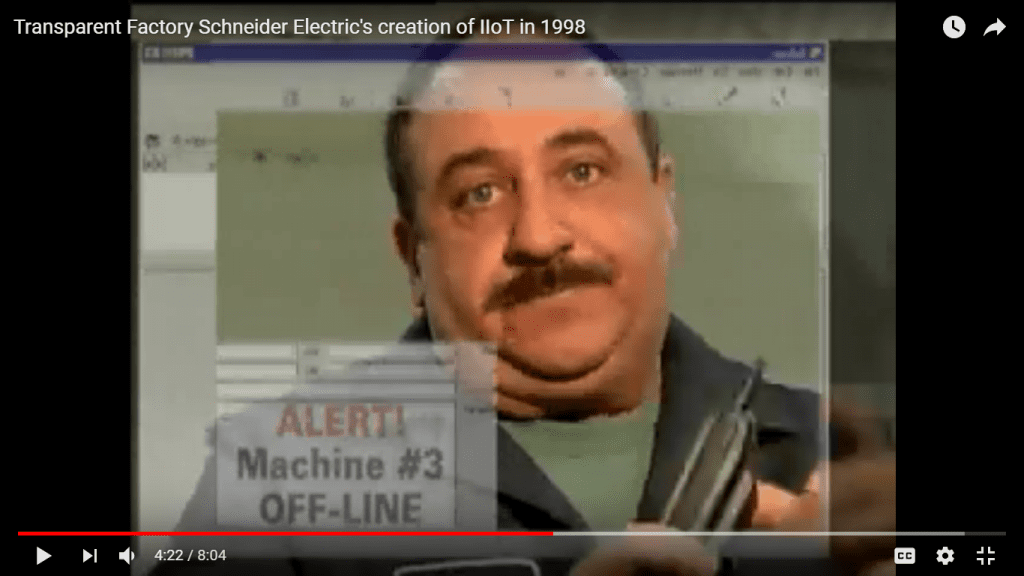 Watch this 1998 video about Transparent Factory. Can you see the similarities to today’s IIoT?

Have you ever heard of plant historians? It’s not easy to pin-point the exact date when they first came into use, but plant/ process historians have been managing lots of data for many years, long before the term Big Data was coined. 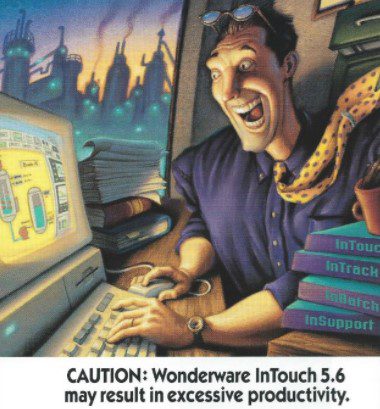 Early ad from Wonderware, one of the pioneers in supervision software and plant historians

6. Blockchain?
I need to confess this one challenged me, but as an automation person, some of the concepts seemed very familiar to voting processing in triple modular redundancy (TMR) systems. TMR was used to monitor and protect a process in which two out of the three processors had to agree that a system should continue to run or else it would be stopped.

Conclusion
So what do you think?  Are you an automation geek like me from way back and can see the genesis of the IoT and digitization from technologies going back almost 50 years?  By the way, all these analogies are a personal point of view from someone passionate and working in automation for 20 years, so I might be biased.  But feel free to express your thoughts and bring other analogies as I’m sure I only scratched the surface.

And if you are from the automation world, never forget Dick Morley (December 1, 1932 – October 17, 2017) and all the contributions he made to create and shape the industry as we know it today.  Dick passed earlier this year and we all owe him a huge debt of gratitude for his vision and leadership. 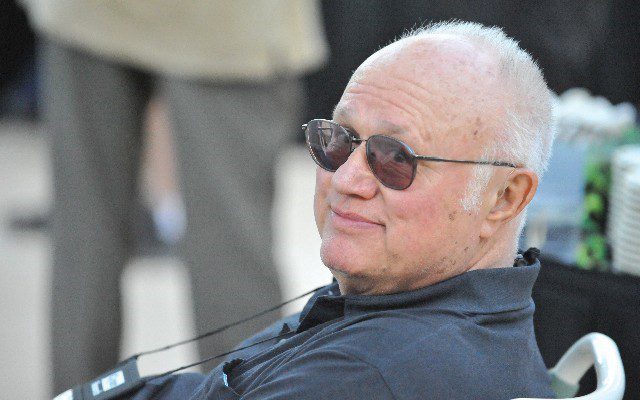 Mr. Dick Morley, the father of the PLC (and contributor to the IIoT)

Lunch with Dick Morley and some Automation Talk

What is Really Going on in Industrial Automation?