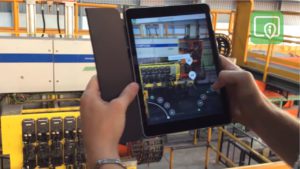 Augmented Reality in the Chemical Industry

The Reality of Augmented Reality: A View From Austmine 2019