The model shown in the figure below represents three primary phases of energy management program maturity levels in a process facility. 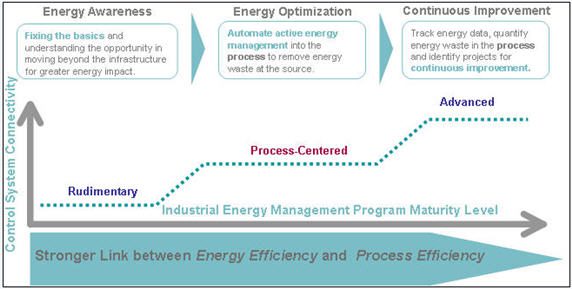 On one end of the scale is the “rudimentary” level, where the building systems are the primary focus of the energy management initiatives.  In the “process-centered” stage, energy management initiatives move to the production area, but are primarily based on equipment modifications, such as machine-level metering, high efficiency motors, variable frequency drive integration, and idle state control.  In many cases, some of these energy-centric modifications actually result in increases in process efficiency as well.  For example, equipment that runs less often and at slower speeds than production schedules tends to break down less and causes fewer unplanned work stoppages.

The “advanced” level, however, is where the substantial benefits can be realized.  In this phase, energy and process data are correlated to provide a unique visibility in which energy is measured in the “context” of production output, in units that resemble other production inputs, such as kWh per widget, or BTU per million gallons, or kWh per ton.  This contextual energy is then tracked, trended and analyzed to support continuous improvement initiatives.

What’s key about the advanced-level energy management program is that it requires a strong technical and logical link with the process automation system and when deployed, process and energy metrics are most effectively combined at the visualization system through what is typically called the “Energy Management Dashboard”.

The next BIG THING for Industrial Energy Management is BIG DATA: Get Ready!

Use energy management to power your corporate sustainability program